Writing is on the wall for US Indo-Pacific strategy

Flip-flops are to Biden what egomania is to Trump 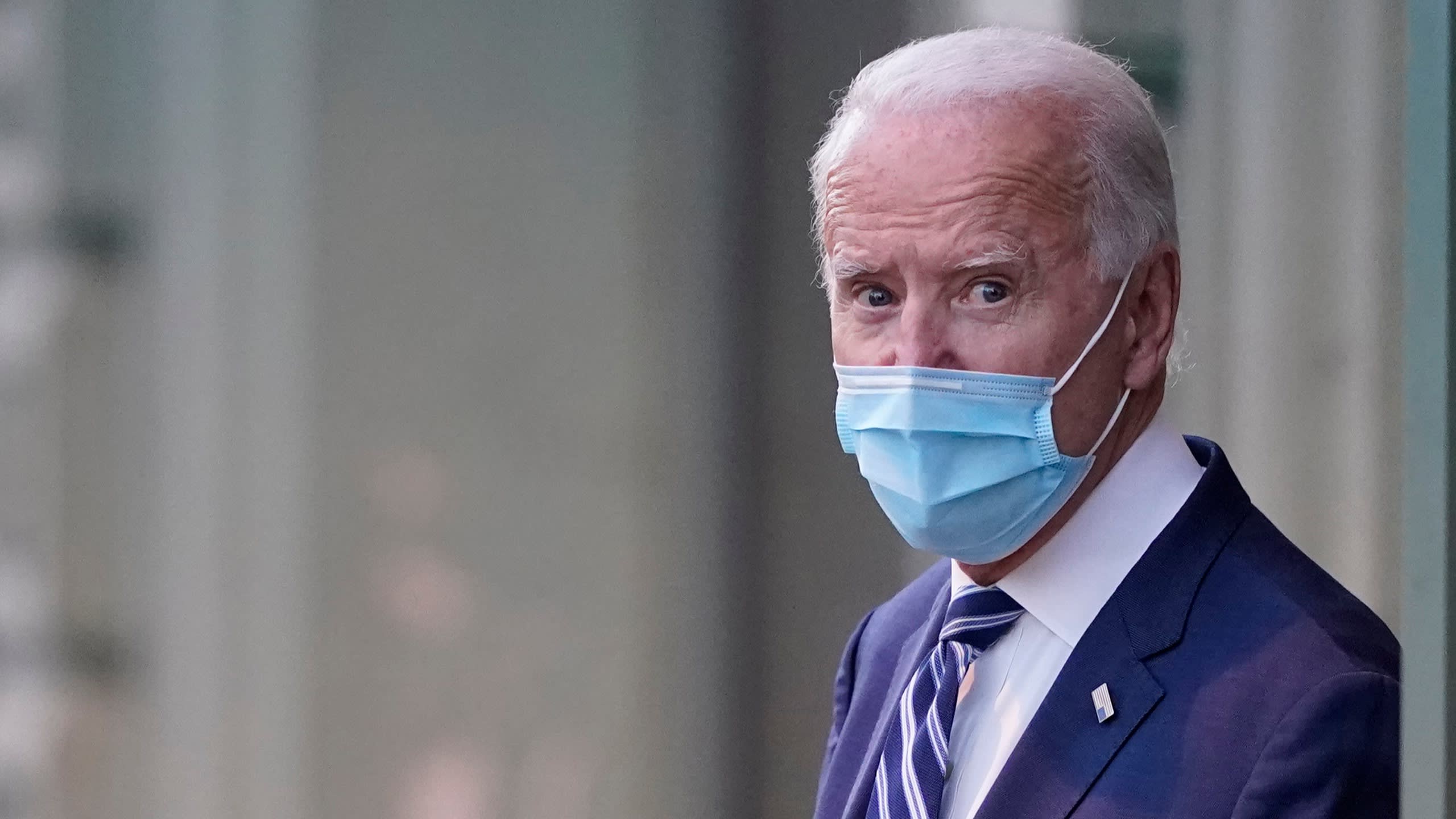 The current naval war games involving Australia, India, Japan and the U.S. in the Indian Ocean show that the Quad -- a loose coalition of the Indo-Pacific region's four leading democracies -- is beginning to take concrete shape in response to China's muscular foreign policy. A concert of democracies in the Indo-Pacific seems closer than ever.

But just when the four powers appear on the cusp of formalizing their coalition, the impending change in the White House has added a layer of uncertainty. The big unknown is whether America's Indo-Pacific strategy and how it will treat China will undergo a structural shift under President Joe Biden, as they did under President Donald Trump.

Trump fundamentally changed U.S. policy on China by acting on his campaign pledge to treat Beijing as a strategic rival and threat. He also replaced Barack Obama's pivot to Asia, which never acquired concrete strategic content, with the free and open Indo-Pacific strategy, a concept authored by then-Japanese Prime Minister Shinzo Abe. Rarely has the U.S. adopted a foreign-designed concept as the linchpin of its foreign policy.

Given Beijing's heavy-handed use of its military and economic power, if President Biden flips America's Indo-Pacific and China policies once again, that will raise concerns across Asia. It will also lead to questions about the inherent unpredictability surrounding U.S. strategy and the wisdom of investing in closer strategic bonds with Washington in the first place.

Nowhere will these questions generate greater concerns than in India, the host of the current Quad naval war games up to Nov. 20. Formally known as the Malabar exercise after an area on India's southwestern coast, this annual series of complex war games is aimed at building military interoperability on the high seas, and now involves aircraft carriers.

India elevated Malabar this year from a trilateral to a quadrilateral event by finally acceding to Australia's pending request to rejoin after it dropped out 12 years ago in a bid to appease Beijing. The Chinese communist mouthpiece the Global Times said earlier that Australia's inclusion would "signal that the Quad military alliance is officially formed." 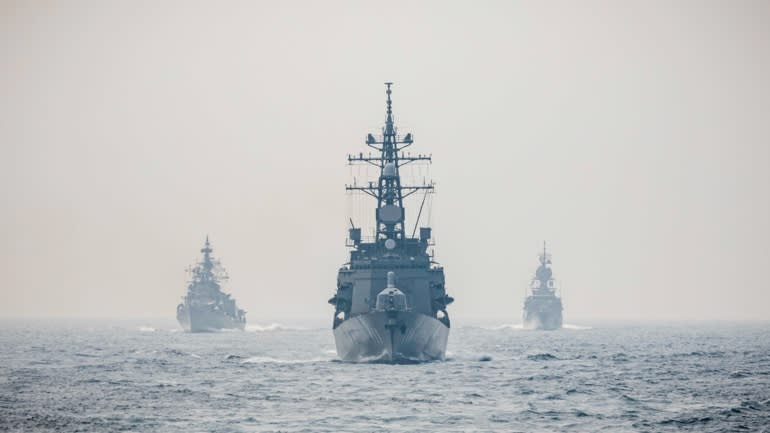 Ships from the Indian navy, Royal Australian Navy, and Japan Maritime Self-Defense Force sail in formation during an exercise as part of Malabar 2020 on Nov. 3. (Handout photo from U.S. Navy)

China's aggressive expansionism has driven a tectonic shift in India's security calculus, leading to closer defense and intelligence-sharing collaboration with the U.S. and the signing of military logistics agreements this year with Japan and Australia. The Trump administration helped midwife this tectonic shift by placing India at the center of its Indo-Pacific strategy and seeking to forge a "soft alliance" with New Delhi.

The U.S., Japan and Australia are already tied by bilateral and trilateral security alliances among themselves, making India's co-option pivotal to building a constellation of democracies. After establishing an Indo-Pacific strategy and resurrecting the Quad, which had been lying dormant for nine years, the Trump administration -- in a symbolic nod toward India -- renamed the U.S. military's Pacific Command as the Indo-Pacific Command. Chinese territorial aggression in the Himalayas has helped bring India along.

But the momentum toward deeper collaboration could slow if Biden's foreign policy downgrades India's importance in regional strategy and returns -- as Biden has signaled -- to the Obama-era approach of cooperating with China in areas where Sino-U.S. interests converge. This would mark a break with the current approach that sees the U.S. in deeply ideological -- even existential -- conflict with the Chinese Communist Party.

Last year, Biden stunned many with his apparent strategic naivete by declaring that "China is going to eat our lunch? Come on, man. I mean, you know, they're not bad folks, folks. But guess what? They're not competition for us." The blowback compelled Biden to backtrack and admit China was a threat.

To be sure, Biden made a habit during the election campaign of reversing his positions on major policy issues. Flip-flops are to Biden what egomania is to Trump. Still, the free and open Indo-Pacific strategy's days seem numbered. Even the term "Indo-Pacific," whose use expanded America's regional framework to include India as a major power, was conspicuously absent in Biden's campaign statements and the 2020 Democratic Party Platform.

Biden could revert to the old term "Asia-Pacific" or keep "Indo-Pacific" while enunciating a new policy for the region. In calls last week with the leaders of Japan, South Korea and Australia but not India, Biden emphasized a "secure and prosperous Indo-Pacific" instead of a free and open Indo-Pacific. And, in apparent deference to Beijing, the Biden office readout left out the assurance Japanese Prime Minister Yoshihide Suga said he received from the president-elect that U.S. security guarantees apply to Japan's administration of the Senkaku Islands, which Beijing claims and calls the Diaoyu.

The bipartisan consensus in Washington that the U.S. must get tough with Beijing, however, is likely to prevent Biden's return to the softer China approach of the Obama period. It was on Obama's watch that China launched cost-free expansionism, including redrawing the geopolitical map in the South China Sea.

The loss of the expression "free and open Indo-Pacific" will likely be seen in India as a diminution of its future role in American strategy. More broadly, it could be viewed as a possible dilution of the U.S. commitment to establish an Indo-Pacific concert of democracies, with India serving as the western anchor and Japan and Australia the eastern and southern anchors of a regional balance of power.

Biden has promised to host a global Summit for Democracy in his first year in office to help "renew the spirit and shared purpose of the nations of the free world." But such a values-based, globalized approach contrasts with the current U.S. strategy of regionally leveraging cooperation with democracies for geopolitical ends.

Unless a clearer strategic vision emerges under Biden, the likely unraveling of the free and open Indo-Pacific strategy could silence any hoped-for regional concert of democracies.