The most telling photos from the Hanoi summit were the shots of the sumptuous banquet table set for the concluding lunch -- which of course never happened, as talks cratered over Kim's unreasonable offer of closing the Yongbyon nuclear enrichment facility in return for a lifting of all sanctions.

The empty places at the table set for U.S. President Donald Trump and North Korean leader Kim Jong Un epitomized the difficulty of landing this agreement while it remains stuck in a U.S. -- North Korea channel. In the end, all roads to Pyongyang lead through Beijing, and the most salient take-away from the Hanoi summit is that there will not be a deal until Beijing signs off on it.

This realization is beginning to sink in for the Trump administration, and it is becoming clear that the ultimate solution to tension on the Korean Peninsula will be wrapped up in a far broader deal between China and the U.S. The coming summit between Trump and President Xi Jinping at Mar-a-Lago is looming ever larger.

China will want not only relief from potential tariffs on its goods in the U.S., but also assurances from the U.S. that our long-term intention is not a unification of the Korean Peninsula under a democratic, highly-capitalistic system like South Korea's. In return, they may be willing to lean in and help solve the problem.

Beijing recognizes that over time, opening North Korea will ultimately make it vulnerable to internal change and potentially take it out of the Chinese orbit. Chinese leaders watched closely as Germany unified at the end of the Cold War and saw the creation of the now huge German economy and its effect on Russia; and they have no intention of allowing that particular historical pattern to be replayed in Northeast Asia. They will therefore attempt to move the Korean talks into a four-party structure with not only the U.S. and North Korea but also China and South Korea at the table. 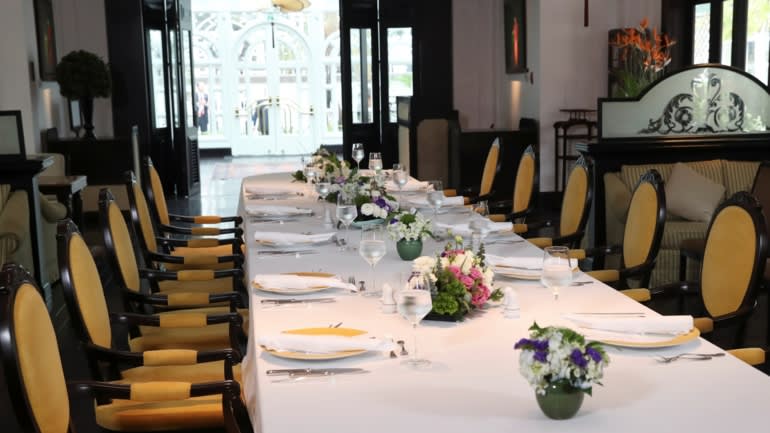 The empty banquet table set for Donald Trump and Kim Jong Un at the Metropole Hotel in Hanoi epitomized the difficulty of landing the agreement.   © Reuters

In the meantime, the administration is on the horns of a dilemma. Officials were embarrassed by the outcome, smacking as it did of lack of detailed preparation and intelligence on North Korea's intentions. Their initial inclination, and probably the right one, is to tighten the screws on Kim. But with two North Korean summits and no concrete results (other than a few hostages returned and -- for the moment -- a lack of missile tests), the Trump team will go into the Mar-a-Lago summit needing something they can trumpet as a "win." Thus the option of returning to a "fire and fury" posture seems unlikely. But, unfortunately, what is called for a ratcheting up of pressure, not merely treading water.

Kim, on the other hand, will let the situation float for another month and see what comes out of Mar-a-Lago. He is betting that the Chinese will eventually cut him a better deal than he could get from Trump in a one-on-one, and he is probably right. And he knows he can always go back to testing to restart the whole cycle -- recreating the classic pattern his father executed time and again.

Thus, the short-term outlook is for a reasonably quiet period given that Kim will not likely rock the boat with a full-blown restarting of overt testing. He will continue to improve his nuclear forces in secret, bide his time, and hope that Trump's domestic problems, fixation with Iran, and complex relationship with China will later provide the best outcome for his impoverished nation (and of course for him personally). The best evidence that this will be his course is the emerging North Korean spin on the Hanoi summit that the North Korean's were in reality only looking for partial sanctions relief -- this stance will keep the door open to another Trump-Kim summit down the line.

The United States would be well served to use the time between now and Mar-a-Lago to undertake a few key moves: increase its intelligence collection and cyber efforts against the North, particularly leveraging South Korean expertise; engage with President Moon Jae-in of South Korea, who time and again tends to act as the "adult in the room" and get his advice on how to move the peace process forward; put North Korea high on the Mar-a-Lago summit agenda and push China to move Kim to a more acceptable posture; and continue to press the international community to maintain "maximum pressure" on the North (recognizing that many nations are flagging in their zeal to do so).

Trump should reverse his rash decision to suspend military exercises with South Korea and increase missile defense systems in South Korea. All of this would put additional pressure on Kim.

Sooner or later, we must not only move these talks into the four-party format but, eventually, consider returning to the even fuller six-party ensemble, adding Japan and Russia. It seems increasingly unlikely that Trump will be able to simply move Kim through sheer force of personality, and judging by Trump's fumble on the Otto Warmbier murder it seems Kim is actually influencing Trump more than the other way around.

Now is the time to turn this process over to the professionals -- diplomatic and military -- to build a coherent, step-by-step plan to move Kim on the path to denuclearization. It must begin with a credible inventory of the entire program and nuclear weapons on one side, with lifting of some of the sanctions in return. This should be followed by in inspection regime, which -- if allowed real access -- could lift further sanctions. Over time, such a "ladder of de-escalation" has the best chance of success.

This would have better prospects now than at any time in the past two decades because sanctions are having a greater effect on North Korea, China appears keener to avoid conflict, Trump is regarded as more unpredictable and therefore more dangerous than any of his predecessors, and the South Koreans are more strongly committed to peace. All four sides are at least marginally more inclined to some kind of deal.

Could the wheels come off entirely? Absolutely. Kim and Trump are both mercurial actors, and the odds of Kim totally giving up his nuclear weapons feels remote, at least in the five-year future. But with sufficient strategic patience, there seems a better than even chance that with Chinese diplomatic engagement, U.S. military pressure, and South Korean incentives in trade and development there is the outline of a deal. Let's hope so -- for the consequences of a failure for the region are lethal and profound.

James Stavridis, a retired four-star U.S. Navy admiral, is an operating executive of The Carlyle Group. After leading the NATO alliance as supreme allied commander from 2009 to 2013, he spent five years as dean of The Fletcher School of Law and Diplomacy at Tufts University.