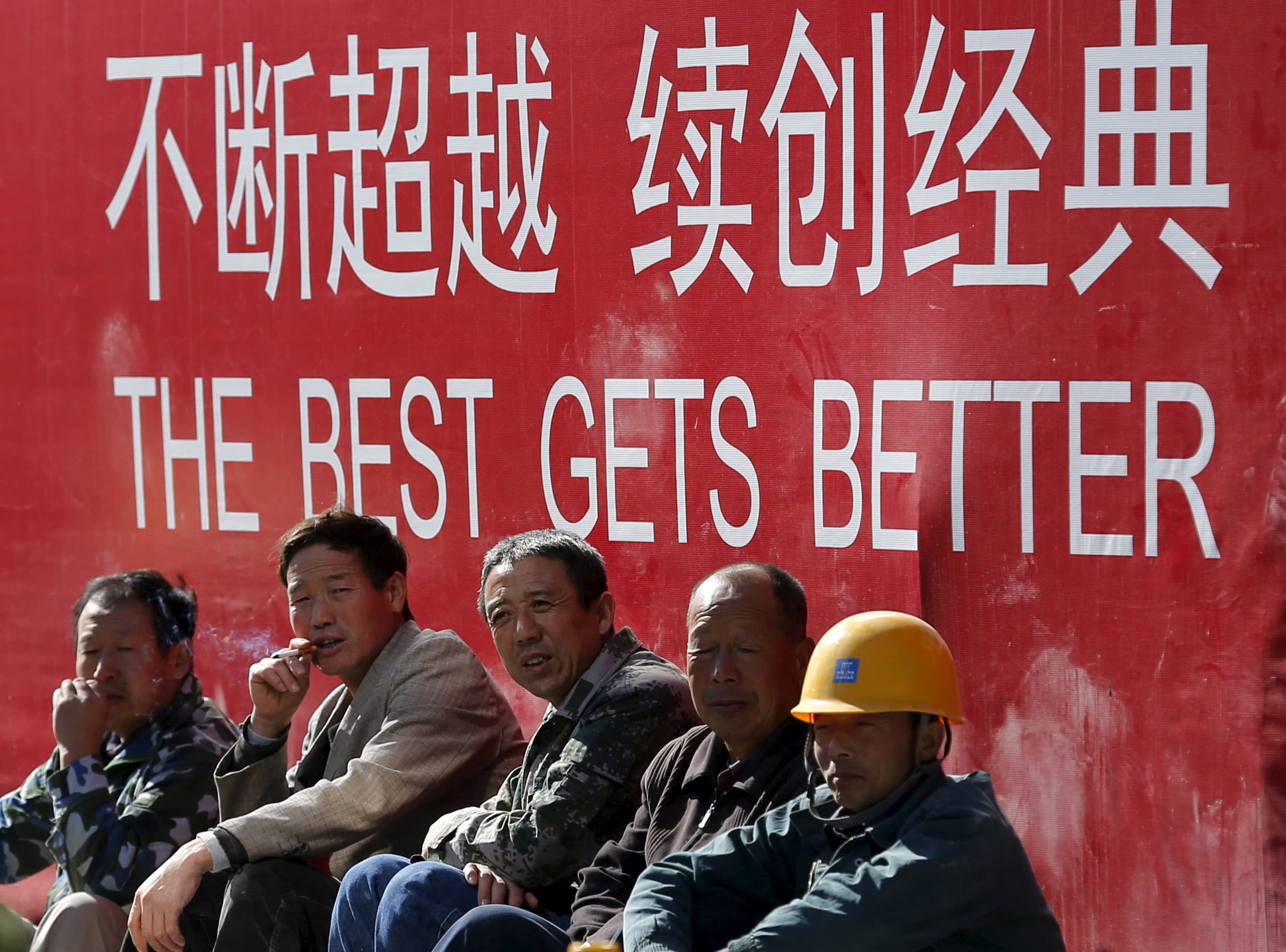 Are the workers sticking to the target?   © Reuters
CopyCopied

Xi Jinping's recent coronation makes him Beijing's strongest leader perhaps since Mao Zedong. The Chinese president is already taking his exalted new status out for a ride by opening the financial sector to greater foreign ownership.

Allowing giants like Goldman Sachs and J.P. Morgan Chase to grab 51% of mainland securities firms radiates confidence. So does removing caps on the overseas stakes in banks. As shows of economic force go, Xi's is a head-turner just as President Donald Trump is scaling back America's international ambitions.

But what if Xi's unquestioned omnipotence makes China's economy more fragile in the long run?

For all the pageantry, muscle-flexing and bold decrees at last month's 19th Party Congress, Xi is demurring on what should be the most important reform: scrapping China's annual gross domestic product target, now set at 6.5%.

This arbitrary goal is the root of all the excessive credit and debt surging through the world's second-biggest economy. The headlong drive year after year to meet it warps incentives, reduces the urgency for vital structural reforms and adds more froth to a system that prioritizes quantity of growth over quality. It also makes the "Chinese dream," Xi's plan to create a "moderately well-off society," harder to realize.

To be fair, Xi seems to be less vocal about the GDP target than his precedessors. He did not mention it at all in the recent five-yearly Chinese Communist Party Congress in Beijing.  But keeping quiet about a mistaken goal falls far short of abandoning it. If he really wants to change gear, he needs to speak out about the GDP goal.

Why does the Communist Party stick with it? Insecurity. Its dominance over 1.4 billion people rests on an unofficial, but unchallenged contract: We, the party, will make you steadily richer so long as you accept our limits on information flows and keep your protest banners out of Tiananmen Square. Holding growth as close to 7% as possible maintains the peace -- and keeps China Inc. in business.

The trouble is, much of China's growth since 2008 has been fueled by runaway credit growth, all in the service of making its annual numbers like some national version of Enron, the collapsed debt-powered U.S. energy group. The economic reformists' hope was that strong output would create a window for Xi's party to tame export-heavy state-owned enterprises and shadow banks. Doing so would create space for a vibrant private sector built on services, innovation, meritocratic principles and, eventually, broad-based prosperity. The Chinese dream.

Any abrupt shift from state control will drive growth well below 6%. Tolerating such a slowdown requires a level of political will Xi has not yet displayed.

The biggest fear is social instability. The tens of millions of workers flooding major cities from the countryside expect steady wage gains. How would a restive migrant workforce accustomed to surging growth cope with suddenly being out of work? Rather than risk mass protests, Xi's party churns out stimulus. Xi also is loath to upset the Beijing applecart. Even as he curbs the power bases of predecessors Jiang Zemin and Hu Jintao, Xi must keep peace among the 25 Politburo members. Many of them look out for the roughly 200 Central Committee members below them -- many of whom profit handsomely from the state-dominant status quo. Move too boldly in recalibrating growth engines and Xi risks leadership splits and factional infighting.

Increased social safety nets, including more generous unemployment insurance, can limit unhappy migrant worker risks. Xi should raise his risk tolerance and sell party bigwigs on the need for structural upgrades. The key is prioritizing steps to strengthen China's foundations and devising a specific timeline for creating space for private enterprises. Xi now has the power to disrupt a change-averse party. But will he?

Xi showed great courage taking down rivals and consolidating power, but he has been surprisingly timid about giving markets the "decisive" role he pledged back in 2013. Beijing continues to subsidize zombie enterprises with flagrant disregard for their creditworthiness. Xi's media crackdown also smacks of weakness, not strength.

Xi's failure to use his new omnipotence to ditch GDP targets may be a harbinger of bigger trouble to come.

Now that "Xi Jinping thought" is enshrined in the party constitution, the president may be settling in for a long stay. Beijing is buzzing about Xi extending his reign beyond 2023, when his second five-year term ends. Now, imagine you are one of China's 33 provincial governors angling for national prominence. The way each gets Beijing's attention is by exceeding economic expectations. If Xi set a, say, 6.5 % goal for 2018, municipal leaders will strive to report 6.7% or even something exceeding 7%.

The announcement effects are many. Each local government circulates a secret subsidiary directive for cities and towns, one that influences all decision-making. If you have ever wondered why second- and third-tier Chinese cities are awash in underutilized six-lane highways, cavernous shopping centers with few tenants, international airports with few overseas flights, lonely amusement parks and gigantic stadiums that host few events, Beijing's target is why.

Even before Xi went the full Mao, notes Diana Choyleva of Enodo Economics in London, local governments had every incentive to use old-economy methods to cap unemployment. A favorite strategy: supporting struggling state-owned enterprises, which often form the core of local incomes and government revenues. "As a result, local officials are loath to let these firms go bust," Choyleva explains.

Xi's ascension will turn those tendencies up a few notches. Disappointing a man Trump recently referred to as "king of China," one telegraphing a long reign, is not an option. That dynamic is likely to fuel big increases in stimulus and in financing mistakes, from white-elephant projects to giant bailouts for weak corporate links. It will discourage risk-taking that might imperil top-line growth and provide more incentives to cheat.

Even before Xi's time, back in 2010, famed short-seller James Chanos of New York-based Kynikos Associates began describing China as the Enron of economies. Beijing, he warned, was on a "treadmill to hell" with expanding asset bubbles, a fudging of official data, double account books, weak transparency and a dot-com-like denial than things could ever end badly. "Only in China," Chanos quipped to Bloomberg recently, "would growth in banking assets of 15%, twice the GDP last year, be considered deleveraging."

Now it is People's Bank of China Gov. Zhou Xiaochuan raising related concerns as he prepares to retire. Zhou has gone so far as to warn of a "Minsky moment," when a debt-fueled boom meets a nasty end. Chinese bank assets, it's worth noting, are at least 310% of GDP compared with 240% in 2012, when Xi was taking the reins, according to the International Monetary Fund.

By clinging to the GDP target model, Xi is keeping China on the treadmill. His emperor-like dominion makes it all the more necessary for officials to toe the line. That's why good news on China's economy going forward may actually be bad.