Younger voices are taking back Thailand from military rulers Despite preoccupations with coronavirus management, Thailand's government cannot avoid the march of the country's youth movement. The drumbeat of dissent this time derives not from the color-coded protests of the past two decades but from fed-up voters and younger voices intent on taking back a country they lost to two military coups and two constitutions amid the polarization, dysfunction and incompetence of the ruling elites.

Awakened by the court-ordered but dubious dissolution of the Future Forward party, which offered a progressive platform against military meddling in politics, what has become essentially a youth movement is taking matters into its own hands.

Unlike the past, when the old guard could resort to putsches and constitutions as reset buttons, Thailand is at a precipice. As tensions are likely to intensify, Thailand will either find a new constitutional balance that subsumes the military, monarchy and judiciary within it or end up with long-term authoritarian rule and economic stagnation.

The narrative of Thailand's youth, as heard in student speeches across college campuses nationwide, would make sense to bystanders anywhere.

After telecoms tycoon Thaksin Shinawatra swept to power in 2001 and was reelected in 2005, his party machine ran up against established centers of power that had called the shots in the country since the Cold War years, revolving around the military, palace, judiciary and sections of the bureaucracy.

When Thaksin was overthrown by a coup in 2006, today's younger voices were still in elementary and secondary schools. They were relatively unaffected by ensuing street demonstrations between the red and yellow factions, driven by judicial interventions that upended two Thaksin-aligned political parties.

When the follow-up coup took place in 2014, this time against Thaksin's sister Yingluck Shinawatra, millennials began to take notice. Along with many older Thais who were tired of back-and-forth street protests and coups, the younger generation initially gave the junta government of General Prayuth Chan-ocha a chance.

But five years after it seized power, the Prayuth-led military government has brought Thailand to a standstill. Annual growth, admittedly always bumpy, slowed from a high under Thaksin of 7.2% in 2003 to 2.4% in 2019. Repression was rife.

As the military's top brass and their civilian allies took complete control, nepotism and graft reared their ugly heads. The few junta-appointed technocrats were not up to scratch.

Thailand became a laggard in ASEAN and regional peers such as Vietnam and Indonesia motored ahead. Beyond incompetence, the ruling generals' worst crime was to cook up through proxies a new constitution in 2017 that gave the military a one-third parliamentary quota.

Students went along until they saw that Thailand was going nowhere. Millennials became the backbone of the brand-new Future Forward party's 6.3 million votes in the 2019 general election and made it the third-largest winner. 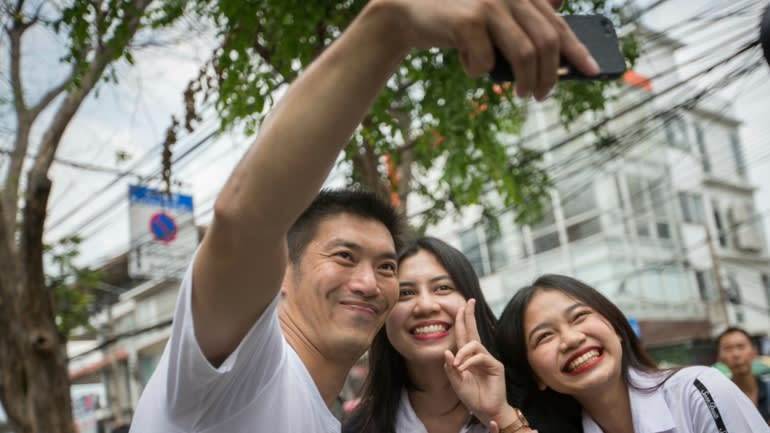 Three unprecedented determinants are now in play in Thai politics. First, in past coups and crises since the 1950s, the Thai economy always expanded at a brisk pace. For example, in 1960-97, GDP growth averaged 6% per year, but declined to just under 4% annually in 2000-19.

While the National Economic and Social Development Council forecasts economic expansion at 1%-2% this year, a recession and negative growth cannot be dismissed, partly due to the slowdown associated with the new coronavirus.

More troubling for the young generation is Thailand's lack of a growth strategy going forward. Instead, the military-inspired constitution is intended to keep the generals in charge indefinitely. The constitution will be the most contentious battleground as dismal economic conditions from a worsening drought and smog to the coronavirus add pressure for a change of government.

Second, when push came to shove in the past, the late King Bhumibol Adulyadej, who reigned for 70 years from 1946, was so respected for his efforts to develop the country that his aura and role became the institutional backstop to restore stability and unity. This happened in 1973 and 1992, when an earlier student generation and Bangkok's middle class led the overthrow of military dictatorships amid a hail of bullets and civilian deaths.

The next showdown between soldiers and civilians may see Thailand in a political free fall, as the new monarch who took the reins three years ago may not be able to play a similar role.

Finally, the student movement this time is empowered by profound communication technologies that have enabled them to rise up and speak out in an organic and organized fashion. Unsurprisingly, their common cause is about a future they lost during the military era when Thailand was left behind in the neighborhood, while now their career prospects and livelihoods have become bleak.

These millennials, and others who have learned from bitter experience, want Thailand's future back and will do what is necessary to get it. It behooves the conservative establishment to offer trade-offs to achieve a revamped constitution that makes the popular will paramount. A winner-takes-all approach risks losing everything and putting Thailand in a long-term tailspin. That is not the country the young generation wants to inherit.