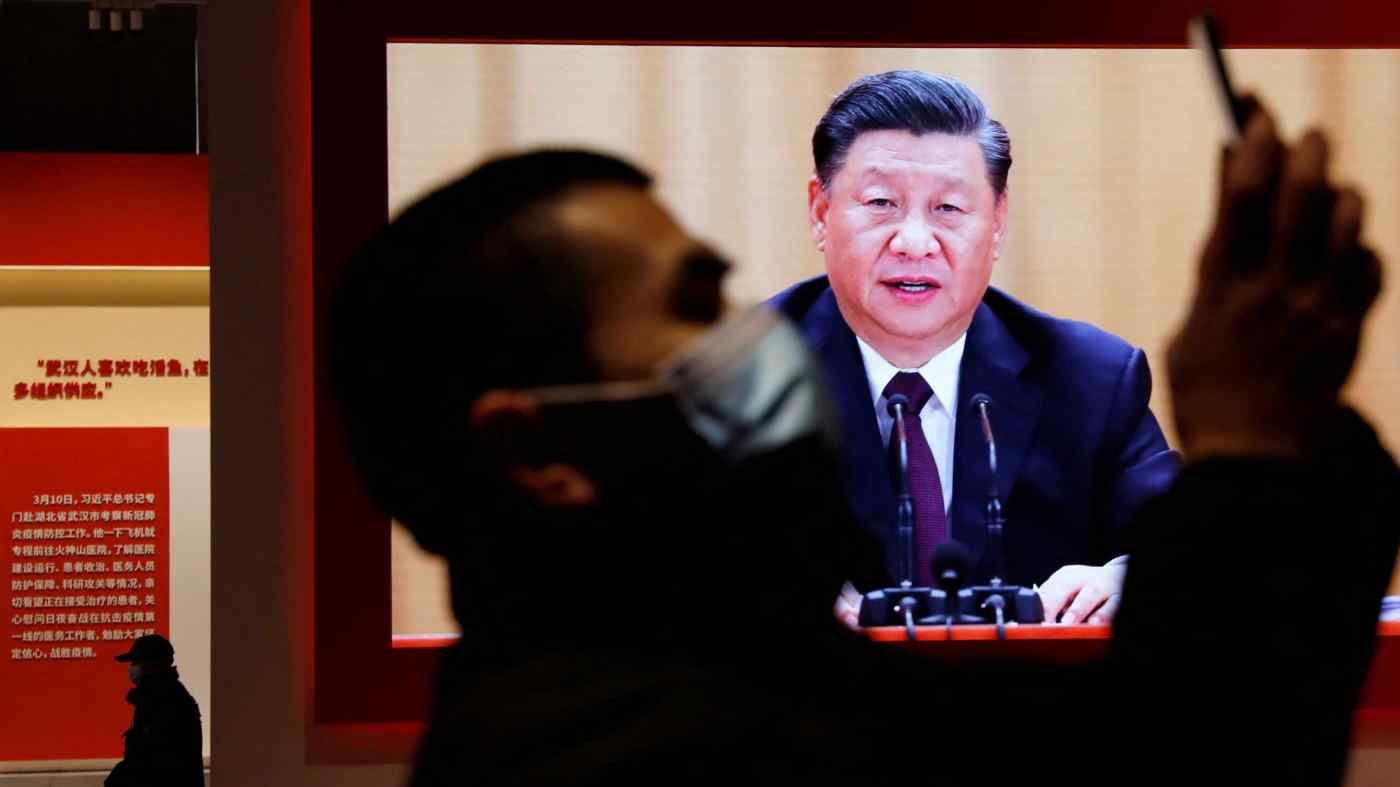 A screen shows Xi Jinping during an exhibition on the fight against the outbreak at Wuhan Parlor Convention Center: The omicron surge is happening at the worst possible moment for President Xi.   © Reuters
CopyCopied

When the COVID-19 pandemic first broke out in Wuhan in January 2020, it was widely seen as Chinese President Xi Jinping's gravest crisis. But his government quickly quashed the outbreak with harsh lockdowns and a zero-COVID strategy that no other country in the world could emulate.

On paper at least, China has good reason to tout its approach. The number of COVID cases and fatalities in China is much lower than in most other countries. This record of success has led Chinese leaders to stick to the zero-COVID strategy and flaunt it as evidence of the superiority of their one-party regime over disorganized and fractious liberal democracies.

But as President Xi is finding out, the trouble with the zero-COVID strategy is that it works until it does not. This approach may have been the right call in dealing with less infectious strains of the virus. But it is now proving to be ineffectual, if not counterproductive, when it comes to fighting the far more contagious but less lethal omicron variant.

Since the surge of the omicron variant hit China a month ago, Beijing has placed more than 340 million people under varying degrees of lockdown. Its largest and most important financial center, Shanghai, has been under lockdown for nearly a month now.

The human and economic toll of China's zero-COVID strategy is mounting daily. Lockdowns have paralyzed a huge chunk of the Chinese economy and will depress its growth this year. The International Monetary Fund now expects China to grow 4.4% this year. A more pessimistic forecast puts Chinese gross domestic product growth at only 3.8%.

In face of the omicron surge, Xi has two equally unpalatable choices.

One option is to follow the lead of Australia and New Zealand, the two countries that abandoned the zero-COVID strategy after the omicron surge. The pressure for such a change, of course, is intensifying as officials and business leaders warn about an unfolding economic calamity and residents in locked-down cities circulate heartbreaking stories about food shortages, the incompetence of local officials and being denied health care. A deliveryman rides on the near-empty street in Shanghai on April 9: The trouble with the zero-COVID strategy is that it works until it does not.   © VCG/Getty Images

Abandoning the zero-COVID strategy has clear benefits. China can avert a collapse of economic activities, mitigate the social costs of an outdated strategy and demonstrate that Beijing is actually capable of self-correction.

But this option also entails huge risks. Opening up will, unavoidably, result in an explosive spike in COVID infections, hospitalizations and fatalities. China's inadequate health care system will be overwhelmed, at least for a few months.

Although critics of the zero-COVID strategy can counter that the success of China's current approach is largely illusory, a surge in COVID infections and deaths, as well as pictures of a strained health care system, could incite a different kind of public ire and do untold damage to Beijing's carefully cultivated image of itself as master of a competent regime.

The political and ideological costs of giving up the zero-COVID strategy will be even higher.

The ruling Chinese Communist Party would be effectively conceding that it really does not have a superior system with regard to Western liberal democracies. President Xi, a consistent champion of the zero-COVID strategy, may also have to take responsibility for maintaining the current course despite mounting evidence of its unsustainability.

The other option is to stick to the zero-COVID strategy, regardless of costs. In the short term, the government may succeed in slowing down the spread of the omicron variant and containing its impact.

But as the experience of Shanghai's lockdown shows, even the most draconian measures will be unlikely to eradicate omicron, and China will soon confront a moment of truth when the six-week lockdown, the record set by Wuhan in 2020, devastates the economy but fails to wipe out the virus.

Worse still, the debacle of Shanghai's messy and costly lockdown is almost certain to be repeated elsewhere.

Should Beijing, where the omicron variant is spreading, also have to be locked down, the political fallout would be far more consequential because the people living in the Chinese capital are known for their political activism and savvy.

Since most of China's ruling elites and their families also live in Beijing, it is hard to imagine that experiencing weeks of virtual house arrest will not change their views on how best to deal with the pandemic.

The worst nightmare for China is that even extended lockdowns fail to contain the omicron surge, but that economic activity grinds to a complete halt in most parts of the country over the coming months.

A debacle of this magnitude will likely compel Chinese leaders to change course after a heroic but ultimately futile effort to sustain their zero-COVID strategy.

In terms of China's political calendar, the omicron surge is happening at the worst possible moment for President Xi, who is seeking an unprecedented third term as the party chief this fall.

Instead of delivering a stellar report card, he now faces a crisis far more perilous than the initial outbreak of the pandemic in Wuhan two years ago. Whatever direction he ends up taking will shape perceptions of his leadership and decide how he governs in the years to come.