2019 in pictures: Looking back at a year of celebrations, confrontations and more

A selection of striking images from across Asia, and the stories behind them

TOKYO -- From coronation celebrations and history-making sports championships to natural disasters and political unrest, 2019 was year of gripping events in Asia.

Here we look back at the year in pictures, and the stories behind them. 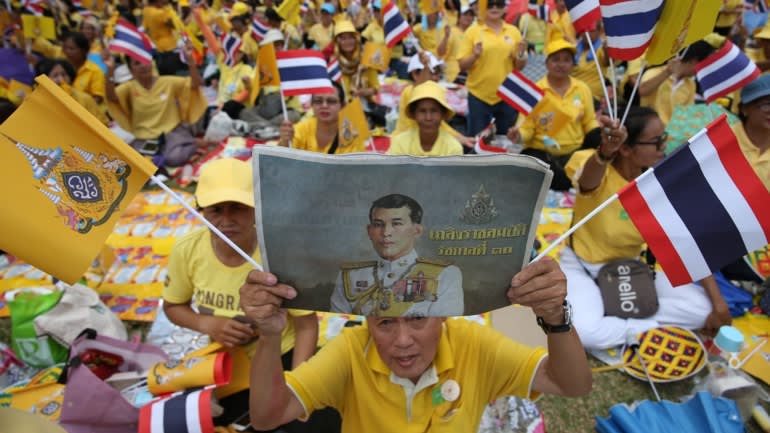 A man holds up a photo of King Maha Vajiralongkorn outside the Grand Palace in Bangkok amid coronation celebrations on May 6.    © Reuters

Thousands of Thais turned out for the three-day coronation ceremony of King Vajiralongkorn Bodindradebayavarangkun in May. 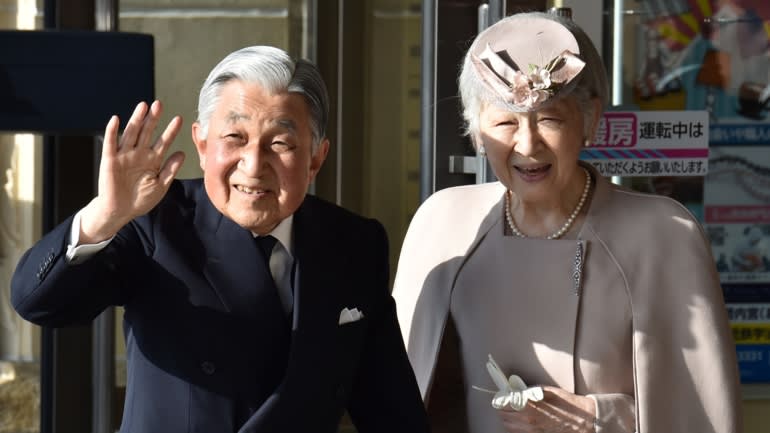 Japan's Emperor Akihito and Empress Michiko greet well-wishers in Mie Prefecture on April 18 after visiting Ise Jingu shrine as part of a series of rituals ahead of his abdication.   © Reuters

Japan's Emperor Akihito stepped down earlier this year and was succeeded by his son Emperor Narhuto ascended the throne on May 1 and completed the centuries-old Daijosai succession rite in November.

Sports brought the region together -- and the world to Asia. Team Japan's undefeated run in the Rugby World Cup group stage brought the nation together and raised the sport's profile. Toledo Aries of the Philippines celebrates after winning the decathlon in the Southeast Asian Games on Dec. 10.    © Reuters

This year's Southeast Asian Games were held in the Philippines. The 56 events took place at more than 60 venues in three locations. 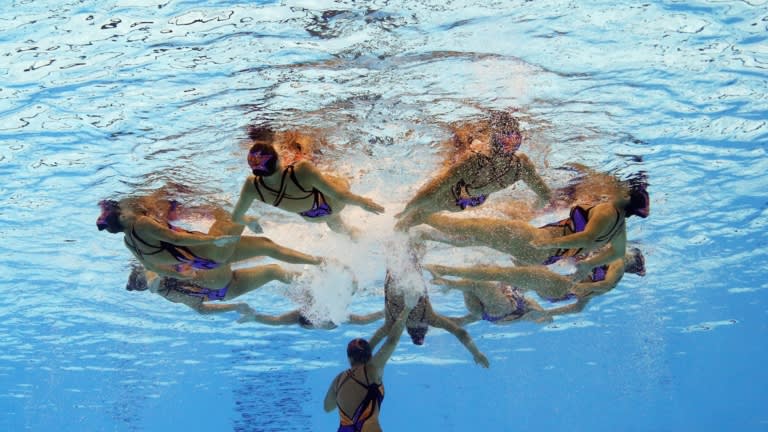 Asia also grappled with a number of natural and man-made crises. Students cover their faces with masks as haze shrouds Kuala Lumpur on Sept. 13. The seasonal haze is caused by forest fires in Indonesia, and this year's outbreak was so intense it sparked a diplomatic spat with Malaysia.    © Reuters Typhoon Hagibis on Oct. 13 in Nagano. (Photo by Akira Kodaka) 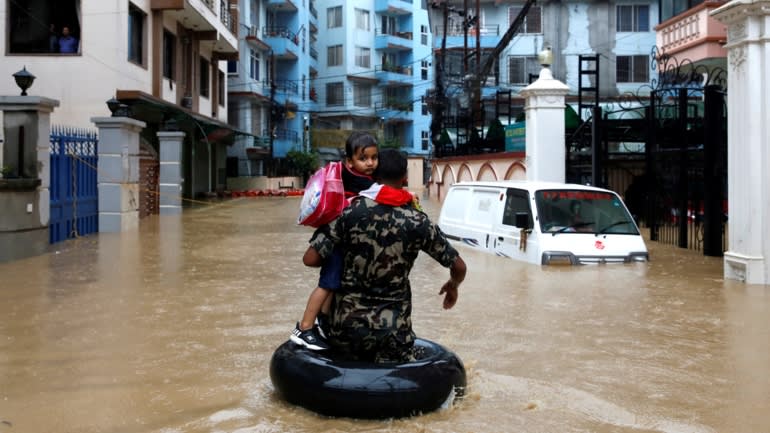 A Nepalese soldier carries a child through floodwaters in Kathmandu on July 12. Monsoon flooding devastated large swaths of South Asia this year.   © Reuters

Politics and protests made for an eventful 2019. North Korean leader Kim Jong Un sits in his vehicle after arriving at a railway station in Dong Dang, Vietnam, on Feb. 26 ahead of his summit with Donald Trump.    © Reuters 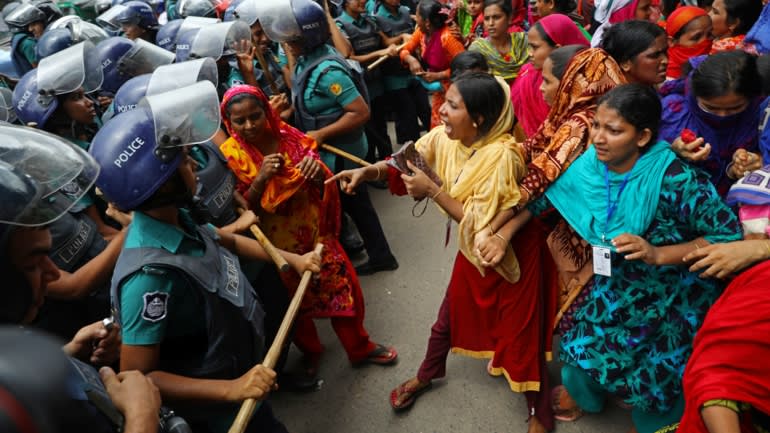 The garment industry is a key pillar of Bangladesh's economy, but it is being transformed rapidly. 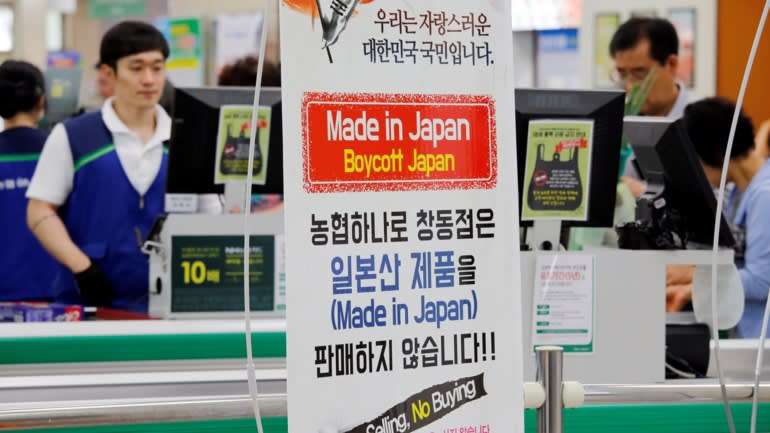 A banner at a market in Seoul reads "We don't sell Japanese products." South Korean citizens launched a massive boycott of Japanese goods this year as relations between the two countries soured.   © Reuters 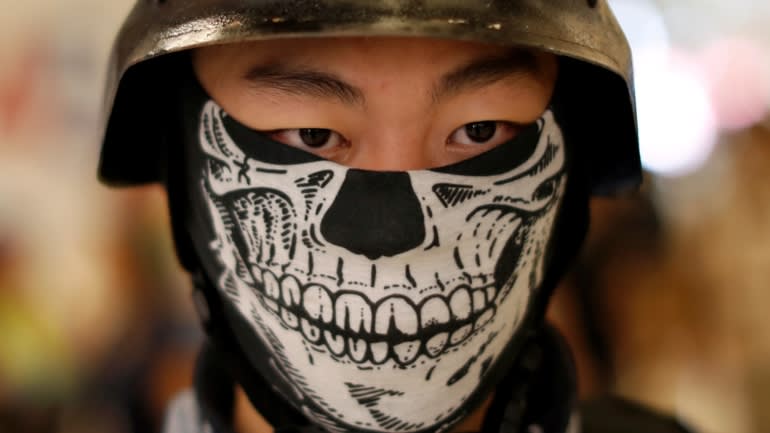 An anti-government protester near Hong Kong's Yuen Long station in September: Unrest has rocked the city for over six months.    © Reuters

National celebrations were not short on drama. Fireworks explode over Tiananmen Square as performers take part in a celebration marking the 70th anniversary of the founding of the People's Republic of China in Beijing on Oct. 1.   © Reuters

Beijing marked the 70th anniversary of the founding of Communist China with a show of military muscle. A student waits to release a dove during celebrations marking the 66th anniversary of Cambodia's independence from France in Phnom Penh on Nov. 9.    © Reuters

Opposition leader Sam Rainsy vowed to return to Cambodia on the country's Independence Day, but the situation developed differently. 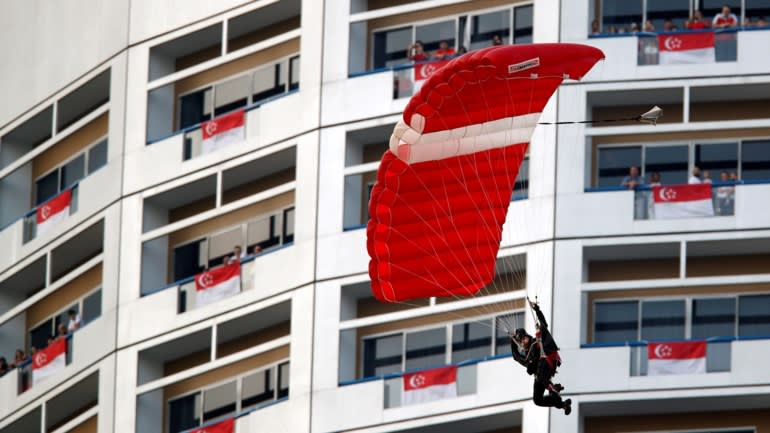 A member of the Singapore Armed Forces Red Lions parachute team takes part in an aerial display during the 54th National Day Parade in Singapore on Aug. 9.   © Reuters

Singapore celebrated the 54th anniversary of its independence on Aug. 9 amid bleak economic news.

And flair could be found everywhere. 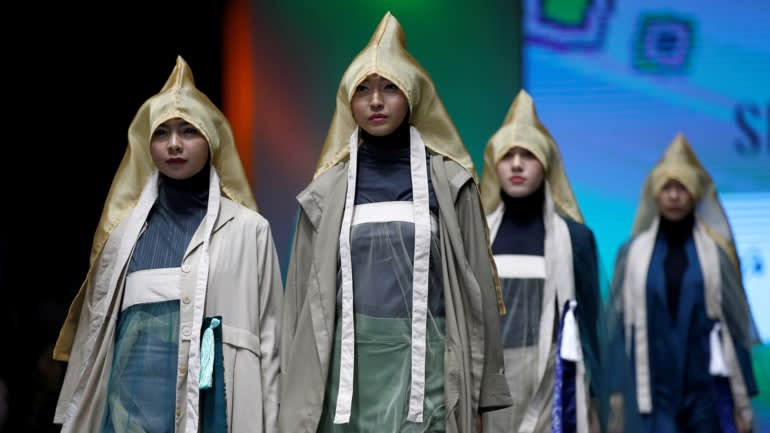 Models present creations by Sayee and Ittaherl during Muslim Fashion Festival in Jakarta on May 4.   © Reuters

2019 was a banner year for Muslim fashion. A participant attends the annual LGBT parade in Hanoi on Sept. 22.    © Reuters

LGBT rights are becoming a prominent issue across Asia, with Taiwan's same-sex marriage law among the most visible signs of progress. In many places, however, awareness is outpacing politics. 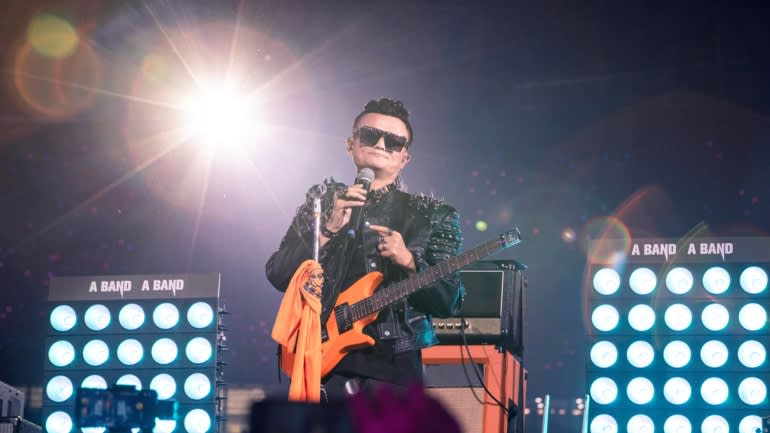 Jack Ma performs during Alibaba's 20th anniversary party at a stadium in Hangzhou, China on Sept. 10. The event also marked Ma's departure as chairman of the company he co-founded.   © Reuters Devotees daub a woman's face with colored powder during celebrations for Holi outside a temple on the outskirts of Kolkata, India, on March 21.   © Reuters

The festival of Holi, which marks the beginning of spring, brings vibrant colors and bright smiles across India.