A first for Japan: Regular jobs for every applicant TOKYO -- Japan had more than one regular full-time job opening for every applicant on average -- the first this has occurred since November 2004 when the government started collecting data.

Japan's ratio of jobs to applicants for regular workers in June rose to 1.01 on seasonally adjusted terms, up 0.02 point from May, according to data released Friday by the Ministry of Health, Labor and Welfare. 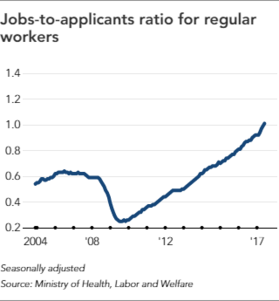 The latest data indicates that companies struggling to fill positions are thinking long-term by offering more regular jobs to secure workers. The world's third-largest economy is close to full employment on the back of an aging and shrinking workforce.

Including non-regular positions, the overall jobs-to-applicants ratio for June rose to 1.51, up 0.02 point and marking the fourth consecutive month it has risen. This was above the median estimate of 1.50 by 19 research institutions compiled by QUICK.

That means there were 151 jobs available for every 100 applicants, the most since February 1974. June's ratio exceeds that of the early 1990s, during Japan's bubble economy.

New job openings for regular workers in June increased 8.7% from the same month last year, higher than the overall 6.3% rise, including temporary workers. Meanwhile, Japan's jobless rate in June was 2.8% on seasonally adjusted terms, down 0.3 point from the previous month, the Ministry of Internal Affairs and Communications announced Friday. The decline was the first in four months.

The latest jobless rate was below the median estimate of 3.0% by 20 research institutions also compiled by QUICK.

The number of workers was 65.83 million, up 610,000 from a year ago, with both regular and non-regular workers increasing. The service sector added 260,000 jobs while accommodations, eating and drinking services added 160,000.