TOKYO -- With 2015 winding down, Hiroshi Watanabe, governor and CEO of the Japan Bank for International Cooperation, has given his forecast for what 2016 will hold. 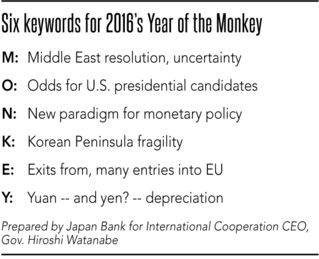 As next year is the Year of the Monkey, Watanabe's predictions come in the form of six keywords whose initials spell out the word "monkey."

M is for the Middle East and its ongoing turmoil, which has seen both resolution and uncertainty. In July, Iran and a group of six nations led by the U.S. reached a historic agreement over Tehran's nuclear program. But more recently, countries have been at odds over how to tackle the Islamic State militant group.

After Paris was hit by simultaneous terrorist attacks in mid-November, Turkey shot down a Russian military jet near the Syrian border, saying the jet had violated its airspace. Russia and France have joined hands to fight against such terrorists, echoing their 19th-century alliance.

At the same time, cheap crude oil prices are threatening the economic and political stability of Saudi Arabia and other oil-producing countries.

O stands for odds, specifically those of the various U.S. presidential candidates. Former U.S. Secretary of State Hillary Clinton is far ahead of her rivals in the Democratic primaries, while it is still unknown if the controversial billionaire businessman Donald Trump will become the Republican nominee.

If Clinton is elected, the U.S. will likely have a divided Congress, with Democrats dominating the Senate and Republicans occupying the majority of the House of Representatives. It is unclear how congressional approval for the Trans-Pacific Partnership and other important issues will be resolved. 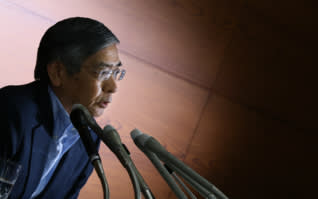 Bank of Japan Gov. Haruhiko Kuroda has indicated he is willing to ease monetary policy further if need be.

N denotes the new paradigm of monetary policy. With the U.S. Federal Reserve ready to hike interest rates in the near future and the European Central Bank heading for additional monetary easing, a major theme in the coming year will be the "great divergence" across the Atlantic. In Japan, Bank of Japan Gov. Haruhiko Kuroda has indicated his willingness to implement additional monetary easing. This would be done to support the government as it attempts to encourage private investment and wage hikes through corporate tax cuts and other measures.

K stands for the unpredictable situation on the Korean Peninsula. The regime of North Korean leader Kim Jong Un is faltering and could collapse as early as next year. The risk of political turmoil is especially unwelcome given that the government of South Korean President Park Geun-hye is not as stable as it could be, either.

E refers to both exits and entries. The risk of a "Grexit" -- Greece's potential exit from the eurozone -- has largely passed, but the question next year will be whether the U.K. stays or goes the European Union. On the entry side is the flood of refugees from Syria. Even German Chancellor Angela Merkel's government is starting to come under pressure as its faces criticism for allowing such an influx of refugees into the country.

Lastly, Y stands for the yuan's devaluation. The International Monetary Fund on Monday decided to include the Chinese currency in its Special Drawing Rights currency basket. But with China's economic slowdown continuing, it is natural to expect the yuan to face downward pressure.

Furthermore, the divergence in economic circumstances and monetary policies between Japan and the U.S. is likely to put downward pressure on the yen, too.

For Japan, the biggest wild card for the Year of the Monkey is the possibility of a double election next July. If elections are called for both houses of the Diet, Prime Minister Shinzo Abe's government could propose further delaying or even scrapping the consumption tax hike scheduled for April 2017.