Oil-rich emirate teams up with Singapore to diversify its economy TOKYO -- The oil-reliant Persian Gulf emirate of Abu Dhabi is taking ambitious steps to tap a different sort of resource: financial technology. The drive stems from a long-held desire to diversify its economy, and connections with Asia could help to ensure the effort pays off.

Richard Teng, CEO of the emirate's Financial Services Regulatory Authority, told the Nikkei Asian Review in May that the Abu Dhabi Global Market had "created a fintech bridge for the first time in the region," linking the Middle East with Asia. The ADGM, a special economic zone that serves as the emirate's financial nerve center, in March signed a cooperation deal with the Monetary Authority of Singapore.

The goal of the arrangement: spur financial entrepreneurship through mutual exchanges of capital and human resources. Teng, the Singaporean authority's former head of corporate finance, played a key role in orchestrating the deal. 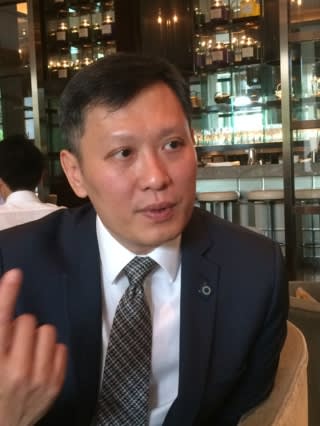 "Both sides will send experts to each other to exchange skills and know-how in fintech," Teng said in the interview. This, he suggested, will make Abu Dhabi a more attractive place for overseas investors to do business.

Gateway to the Middle East

Abu Dhabi is the biggest of the seven emirates that form the United Arab Emirates. It accounts for about 90% of oil production in the UAE federation, and is one of the core members of the Organization of Petroleum Exporting Countries.

For businesses, the perks of putting down roots in the ADGM include an allowance for 100% foreign ownership, no taxes for 50 years and no restrictions on repatriating profits. It accommodates around 340 banks and companies, including ones from outside the financial sector. Teng was appointed to the chief regulator's post in 2015, when the zone was established.

Last November, the ADGM launched what it calls the FinTech Regulatory Laboratory, or RegLab, to provide a platform for foreign players to innovate. The authority has so far cleared five companies and banks out of applicants from the U.S., U.K., Singapore, Egypt, and elsewhere to participate.

Teng noted that the trend toward cultivating sectors besides oil is "clear" in Abu Dhabi, and the cooperation with Singapore is designed to make fintech the driving force of economic diversification. He also said that in the Middle East and North Africa, there is high demand for low-cost financial services, along the lines of London-based money transfer service TransferWise or U.S. automated asset management company Betterment.

Asian financial companies registered in Singapore will have "another big market, MENA, to develop and explore business [opportunities] in wealth management, remittances and other fields," Teng said, using the acronym for the Middle East and North Africa.

Singaporean banks like Oversea-Chinese Banking Corp. and DBS Group Holdings, which are beefing up their wealth management businesses, could conceivably target the oil-rich Gulf states using the cooperation agreement as a gateway.

Teng says the ADGM is unique as an "independent jurisdiction" and as the first financial market in the MENA area to operate under Common Law, like Singapore and Hong Kong. This, he said, should make it easier for banks and other financial companies from Asia to do business.