TOKYO -- If the U.S. decides to introduce what is being called a border adjustment tax system, it could end up pushing down economic growth rates in five Asian nations that the Japan Center for Economic Research studied.

The five countries are China, Indonesia, Thailand, Malaysia and the Philippines.

If U.S. President Donald Trump gets his "border adjustment" policies passed, we see China's growth rate slowing by 0.2 of a percentage point, to 5.8% in 2018, being compared to the baseline scenario. Meanwhile, the policies would take the same 0.2 point bite out of the collective growth rate of the four key Southeast Asian economies, to 4.6% in 2018.

Our latest short-term outlook for these countries also considers a global economy that late last year got a shot in the arm from a number of factors, including a recovery in crude oil and resource prices and a Chinese economic slowdown that seemed to have bottomed out. 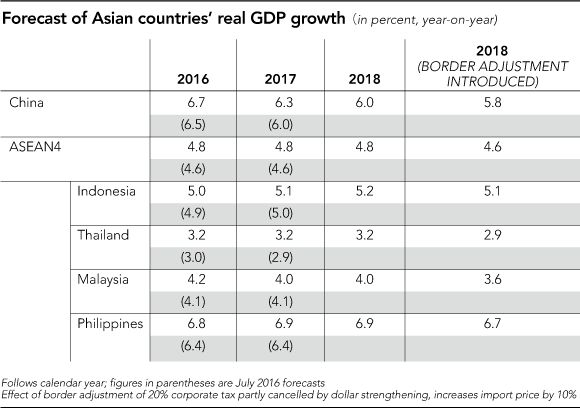 Also toward the end of 2016, stock markets began to soar after Trump won the U.S. presidency. Trump's electoral victory in early November got investors excited about possible corporate tax cuts and increases in public spending on infrastructure and other projects.

As the baseline scenario, we now see China's gross domestic product growing by 0.3 of a point and the four Southeast Asian economies gaining 0.2 of a point in growth in 2017, being compared to our previous forecasts in July.

We see the expansion of public investment as the main factor behind China's expected growth and exports to China as driving the ASEAN4 -- all four countries are members of the Association of Southeast Asian Nations.

Although we see China continuing to grow, we are not changing our view that the pace of growth will decline. This is mostly due to the large piles of corporate debt clogging the country's financial system. We expect China's GDP growth rate to slow to 6.3% in 2017 from 6.7% in 2016 and to continue to slow to barely 6% in 2018.

We see the ASEAN4 growing at a collective 4.8% in 2017 -- maintaining its pace of 2016. We also do not expect any changes in this rate in 2018. The ASEAN4 will struggle to maintain this pace, however, as the grouping gets hit by the slowing pace of China's economic growth and as its industries struggle through structural problems that will make the region's exports less competitive.

As a whole, Asia's main growth driver will shift to consumption-led domestic demand and investment in 2017; last year, exports were the main engine.

Meanwhile, concern is rising that money will flow out of emerging countries to the U.S. now that the Federal Reserve Board has begun raising interest rates in response to the booming U.S. economy.

This will weaken Asian currencies, including the Chinese yuan, against the dollar through 2017 and into 2018. Central banks in most of Asia are expected to change their attitude from a easing bias to neutral or an tightening bias to protect their currencies and curb inflation, rather than to stimulate their economies.

Now about those "border adjustments." To understand this term, it is helpful to think of the value-added tax that some European and Asian countries levy: Only the value added to a material, article, good or service is taxed at each stage of production or distribution. In the end, consumers pay this tax.

Trump's economy-meisters, though, want other countries' exporters to pay up ... in the form of a "border tax." They also want to tax corporations at a 20% rate -- but only on their U.S. revenue (minus U.S. costs). This is far lower than the 35% rate at which U.S. corporations are currently taxed.

Perhaps you have spotted the protectionist streak here: The lower rate only applies to economic activity in the U.S. Essentially, Trump's border adjustments would subsidize exports and tax imports. Looking at the "adjustments" another way, the border taxes would create a revenue stream that would make up for what is effectively a U.S. corporate tax cut.

Asia is understandably anxious. So we wanted to look at how these border adjustments will affect the economic growth rates of the five Asian countries we discussed above. We assumed that Trump's policies will begin affecting Asia in 2018. We then evaluated both the effects on direct exports from Asian countries to the U.S. and those on indirect exports by way of other countries to the U.S.

We see these border adjustments being partially offset by a strengthening dollar. We hypothesized that U.S. imports from Asia will be slapped with a 10% increase of import prices.

Malaysia's growth rate will depreciate by 0.4 of a point and Thailand's by 0.3 of a point. These will be deeper cuts than what we see China suffering because these two countries rely more on exports than does China.

Meanwhile, we see Indonesia's growth rate taking a 0.1 point hit from U.S. border adjustments and the Philippines being knocked back by 0.2 of a point. These two countries depend more on domestic demand than does China.

So Trump's America firsterism will drop China's growth rate below 6%, Malaysia's under 4% and Thailand's beneath 3%.

Tsuyoshi Minami and Hiroyuki Motegi contributed to this article.