TOKYO -- Responding to an acute labor shortage that could choke Japan's economic growth, the government has begun to consider opening the nation's labor market more to foreign workers.

Economic recovery and strong demand for construction workers brought on by a building boom are putting increasing pressure on the government to make a major labor policy shift.

Accepting a large number of unskilled foreign laborers, however, would have enormous social and economic implications. Any move to change Japan's long-standing policy of effectively closing the door on such workers will require lengthy debate that addresses both the short-term needs and the long-term structural challenges facing the nation.

Signs of a serious shortage of hands are already abundant, especially in the construction sector. 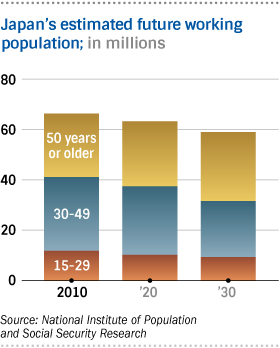 "We can't keep up with surging demand for remodeling and earthquake retrofitting jobs because of a shortage of manpower," said a senior executive of a plastering business in Tokyo.

According to government data, there are currently several job offers for each job seeker in the construction sector. The labor shortage is particularly serious at construction sites, where the type of work makes it difficult to use women or elderly workers.

Ready to open up?

Alarmed by the prospect of a manpower crunch stifling growth, the government has started considering expansion of the Technical Intern Training Program, which allows workers from developing countries to work for up to three years in Japan.

In a Feb. 13 session of the lower house budget committee, Prime Minister Shinzo Abe promised to give serious consideration to expanding the program. Abe has indicated that he wants to make the measure a key component of his new strategy for economic growth, to be unveiled in June.

The training program for foreign workers was launched in 1993 as a way to help developing countries acquire the skilled and trained workforce needed for upgrading their economies. It covers a total of 68 business categories, including those in agriculture, construction and food processing.

There were over 150,000 foreign nationals working in Japan under the program as of the end of June 2013. China was the largest provider of workers, followed by Vietnam.

Workers in the program can be either directly employed by individual companies or referred to firms by local chambers of commerce and industry or cooperatives. The construction industry as a whole accepts some 5,000 foreign workers per year under the program.

Debate on the proposal to expand the program will focus on whether to increase the number of foreigners allowed to work in the industry. But there are also arguments for widening the scope of job categories covered.

The government's Industrial Competitiveness Council, which advises the prime minister, has proposed to add nursing care to the list, as the industry has been plagued by chronic labor shortages. Some policymakers within the administration are arguing for the addition of the transport industry.

The average age of taxi, bus and truck drivers has been rising rapidly. Sixty percent of drivers are now aged 55 or older. If the retirement age is not raised from the current 65, a large number of drivers will be forced to leave the workforce in the next decade.

Proponents introducing foreigners into this sector warn that this mass retirement will disrupt the nation's public transport and distribution networks.

But there is still strong opposition to enlarging the pool of unskilled foreign workers.

Japan has long maintained the policy of restricting the issuance of work visas almost exclusively to foreigners who are highly skilled and educated. The government, in principle, does not allow unskilled foreign workers to work in Japan. The Technical Intern Training Program is not a scheme to accept immigrants. Rather, it is designed to help workers from developing countries acquire skills useful in their home countries through on-the-job training, according to Professor Yoshio Higuchi of Keio University.

The Abe administration is keenly aware that Japan urgently needs more unskilled foreign workers to fill the many vacancies in certain industries if it wants to keep its economy on a growth path.

"We need (foreign) workers who can be immediately effective," a top administration official said in January. But many bureaucrats in the justice and labor ministries are vehemently opposed to the idea out of concerns that the measure could adversely affect public safety and wage levels. "Is it necessary to come to Japan in order to learn how to drive a taxi or a truck?" a senior official at the Ministry of Health, Labor and Welfare said.

In a sense, the labor shortage has been long in the making, stemming from the combination of an aging population and a declining birthrate. The problem remained dormant, however, due to the nation's long deflationary stagnation.

In Japan, debate on the acceptance of immigrants tends to turn into an emotionally charged war of words over the future of the nation. Given the stormy history of the issue, there will likely be many twists and turns before a conclusion on this proposal is reached.