Of course, making big plans is one thing; pulling them off is another challenge entirely. The infrastructure business is notorious for delays and outright failures. And while there may be plenty of money floating around these days, emerging economies will still have to fight for investment dollars.

Yoo Il-ho, South Korea's deputy prime minister, struck an optimistic note at an economic ministers meeting on Feb. 25. The establishment of the AIIB, he said, "will boost demand for new infrastructure investment in the Asian region." Seoul has a plan to capitalize on that demand: The government recently set up a council of state-run banks and a trade insurer to help South Korean companies bid for projects.

M.A. Mannan, Bangladesh's finance minister, also likes what he sees in the AIIB. "We need more capital to carry out the country's development activities," he told lawmakers on Feb. 23. "The AIIB will help us in this regard." Mannan dismissed concerns that joining the China-led institution would compromise Bangladesh's relationships with two other international lenders -- the World Bank and the Asian Development Bank.

Established last December, the AIIB is seen as a game changer for regional infrastructure development. It is not the only newcomer with cash to offer. The $100 billion New Development Bank, also known as the BRICS bank, is setting up shop in Shanghai. K.V. Kamath, chief of the institution, signed documents for the establishment of the bank's headquarters there on Feb. 27 and revealed that funding could start in April.

These multilateral lenders, though, can only do so much. 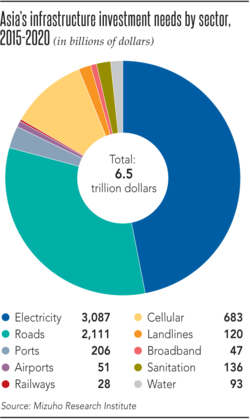 Japan's Mizuho Research Institute says the region will need $6.5 trillion worth of infrastructure investment between 2015 and 2020. Electricity in East and Southeast Asia is estimated to account for about 37% of that. Indonesia, which had roughly 46,000 megawatts of power generation capacity in 2013, wants to add another 35,000MW by 2019.

Transportation improvements will also be expensive. By the 2030s, the length of urban railroads in eight Southeast and South Asian countries is projected to increase by a factor of four. Thailand is mulling bids for four railway projects worth over $8.89 billion; India plans to construct railways in more than 10 cities.

A reality check: Experts say the AIIB, ADB, BRICS bank and other such lenders have the means to fund less than 5% of Asia's infrastructure needs. 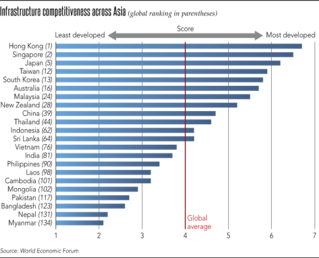 As things stand, several Asian economies are hampered by poor infrastructure. The World Economic Forum's latest global competitiveness index of 140 countries ranks Indonesia's infrastructure at 62nd, the Philippines' at 90th and Myanmar's at 134th. The ADB estimates that traffic congestion shaves up to 5% off Asian countries' gross domestic product every year.

Governments facing budget limitations see public-private partnerships as one answer. ADB President Takehiko Nakao has met with Indian Prime Minister Narendra Modi, Indonesian President Joko Widodo and Chinese Finance Minister Lou Jiwei in the last year or so and got the impression there is "very strong interest" in PPP arrangements.

The Philippines has set up the Public-Private Partnership Center under its National Economic and Development Authority. A small army of government officials, along with legal and finance experts, is responsible for planning projects that draw on private-sector capital and know-how.

But sealing PPP deals can be a challenge. Sure, there is a lot of capital out there. But bankable infrastructure projects -- the kind that give private banks the confidence to lend -- are rare in Asia's emerging markets. "The issue is not funding but a lack of good projects," said Rajeev Kannan, director of the structured finance department at Japan's Sumitomo Mitsui Banking Corp.

Consider the forlorn concrete pillars that stand in the middle of a busy Jakarta thoroughfare. They are remnants of a monorail project that began more than a decade ago. Construction was stalled for years due to financing problems, revived in 2013 and scrapped altogether two years later.

Land acquisition is perhaps the most typical obstacle. This has tripped up a Japanese and Indonesian consortium that aims to build a 2,000MW power plant in the province of Central Java. The project has been delayed for about three years.

Political instability can turn things upside down, too. In Thailand, a 350 billion baht ($9.96 billion) flood prevention project was halted shortly after the military ousted the elected government in May 2014. The new administration justified the decision by saying the bidding process had lacked transparency, but industry watchers were shocked. After all, the winner was chosen through an international tender.

A similar stoppage could lie ahead in Myanmar. Last year, parliament gave the green light for a port and industrial park in the western state of Rakhine. A consortium led by China's Citic Group is behind the project. But Myanmar's new government, led by Aung San Suu Kyi's National League for Democracy, has pledged to evaluate the impact of large-scale construction on surrounding areas. Many citizens oppose what they see as China's dominance over the domestic economy, so there is a chance the government will rethink the project.

Yet another impediment for project financing is exchange rate volatility. This is a serious concern for banks. Dollar-denominated loans can help to reduce the risk, but they require governments to provide guarantees in a foreign currency -- something countries with tight budgets and limited foreign reserves cannot afford.

"If more deals start happening in Asia," one banker said, "tighter regulations will be a big constraint."

On the flip side, a PPP project in Singapore shows how clear regulations and low political risk can go a long way toward attracting foreign businesses.

Construction of the Singapore Sports Hub, an athletic complex that includes a 55,000-seat stadium with a retractable roof, was handled by France's Bouygues. "The Singapore government provided payment based on completion and availability of the stadium," SMBC's Kannan said. "Although sponsors and lenders had to take some risk on noncontracted revenue, a majority of the risk was mitigated by payment from the government of Singapore." Prime Minister Lee Hsien Loong declared Sports Hub open in July 2015; a successful refinancing was carried out in December. 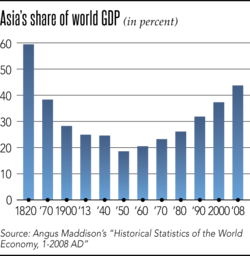 "If you don't reform your system and provide more transparency and risk mitigation, then the money will go to somebody who does," said Julian Critchlow, a partner at Bain & Co.

Asia has a prime opportunity to become the world's economic powerhouse. The region accounted for more than half of global GDP in 1820, according to estimates by the late economic historian Angus Maddison. The figure was down to 18% in the 1950s, at the peak of colonization, but by 2008 it had rebounded to 43%.

To make the most of that opportunity, however, Asian countries will need to remove the bottlenecks that are hindering infrastructure investment.