With economic growth in the first half of 2017 exceeding the previous forecast in February, the outlook for gross domestic product for all of 2017 for China was revised up to 6.7%, and 5.0% for the four ASEAN countries.

The forecast for China is 0.4 points higher than the previous one, with the four ASEAN countries up 0.2 points. In particular, the forecast for Malaysia and Thailand increased 1.3 points and 0.4 points, respectively, to 5.3% and 3.6%, thanks to strong export growth. As for domestic demand-led Indonesia, the 5.1% forecast has not changed. Exports performed well in the Philippines, but public investment in January-March 2016 did not grow as expected, lowering the country's forecast 0.3 points to 6.6%.

Unexpectedly sound economic growth in ASEAN is mainly due to rising exports, which are expanding in response to the global economic recovery that is boosting Japan, the U.S., E.U. and other countries.

Key contributors to export growth have been smartphones, the manufacture of which has contributed to expanding demand for electronics parts produced in Asia. Meanwhile, exports of primary products in Southeast Asia, such as agricultural goods, are also strong. 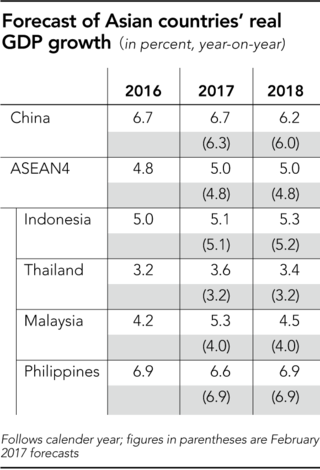 The strong export industry seems to have led to rising incomes and fuller employment, supporting the trend of steady consumption. Gross fixed capital formation is also growing due to infrastructure investment.

Concern over protectionism is receding as the administration of U.S. President Donald Trump abandoned its corporate tax border adjustments. However, from the second half of 2017, the smartphone economy is expected to cool, so export growth cannot be expected to be as high as in the first half of the year.

The Chinese economy still holds huge corporate debt, and slowing growth is inevitable as investments and other factors are adjusted. JCER expects China's GDP will slow to 6.2% in 2018. Thailand and Malaysia, both highly dependent on exports to China, will see growth weaken to 3.4% and 4.5% respectively.

Meanwhile, Indonesia and the Philippines, which are less dependent on exports, will grow at 5.3% and 6.9% respectively, due to rising domestic demand, such as private consumption and infrastructure investment.

Global monetary policy is swinging markedly towards normalization. In the second half of 2017, the Federal Reserve will start reducing its balance sheet, while the European Central Bank (ECB) will announce the tapering of quantitative easing.

Some feel that the Fed's asset reduction will have only a minor impact on long-term interest rates. However, if U.S. long-term interest rates suddenly spike and funds flow from emerging markets, including those in Asia, to the U.S., the region may see another currency crisis like the one in 1997. It may be a relief that Asia's currency vulnerability -- measured by the current account surplus, foreign exchange reserves and so on -- has lessened substantially compared to 1996, a year before the crisis hit.

Meanwhile, risk of war between North Korea and the U.S. has suddenly increased this month. War involving South Korea, Japan and even China would greatly impact Southeast Asian supply chains. Furthermore, high-ranking officials in the Trump administration have been steadily resigning, indicating that the confusion in U.S politics is expected to worsen. The political risk of the U.S. itself is also on the rise.

Hiroyuki Motegi and Kazuya Manabe contributed to this article.