TOKYO -- Asia's central bankers are about to have their mettle tested, and they know it.

"Stay calm on the weakening of the Hong Kong dollar," Norman Chan, chief executive of the Hong Kong Monetary Authority, said in a message posted on the central bank's website last Thursday. The currency had slipped close to the lower limit of its trading band of HK$7.7500-HK$7.8500 to the U.S. dollar. It had been declining since November, alongside a rise in American interest rates and a widening gap between Hong Kong and U.S. yields.

A little over a week earlier, on Feb. 26, the new chief of Taiwan's central bank was frank when he spoke at his inauguration. "Looking ahead, it will be a great challenge for Taiwan's central bank to adjust monetary policies, including currency and interest rates, within such a dynamic environment," said Yang Chin-long, an experienced hand but still the island's first new central bank governor in 20 years.

U.S. long-term interest rates jumped in February, and Jerome Powell, the new chairman of the U.S. Federal Reserve, sounds like a hawk. As the Fed and the European Central Bank unwind their quantitative easing policies and shift to full-on tightening, it is likely to create a vacuum effect, sucking money out of emerging countries in Asia and elsewhere. There are already signs of this.

Chan, Yang and their peers will have to steer the region's economies through.

The pivotal moment comes 10 years after the collapse of Lehman Brothers. Central banks, the lenders of last resort, staved off a full meltdown and today have a much greater presence in the financial markets.

The moment also comes as a number of Asian central bankers wrap up their terms in the first half of the year. Some will stay on, as in Japan, where Haruhiko Kuroda has been reappointed by the government. In other cases, like China, the reins will be passed to new governors.

South Korea is leaving those reins with Lee Ju-yeol, a decision that underscores President Moon Jae-in's desire to avoid sudden policy changes in these tense times. Over the last four decades, no Bank of Korea governor has held office for more than a single four-year term. Not only is Moon breaking an unwritten rule, he is embracing a central banker chosen by his rival and impeached predecessor, Park Geun-hye.

After his reappointment was decided in early March, Lee alluded to the risk of global market upheaval in the near future. "I feel more responsibility than four years ago, when I was first called," he said.

Indonesia, meanwhile, is poised to turn things over to Perry Warjiyo, a central bank deputy selected by President Joko Widodo as the sole candidate to replace incumbent Gov. Agus Martowardojo. Warjiyo still needs parliament's blessing, but this is considered a fait accompli, since Widodo's coalition holds a majority.

"Warjiyo's hawkish credentials fit with [Widodo's] emphasis on price stability ahead of the 2019 [elections]," Eurasia Group said in a report on Feb. 26.

In another worrying sign, the MSCI Emerging Markets Asia Index retreated by about 5% in February after soaring more than 40% from the end of 2016 to late January. 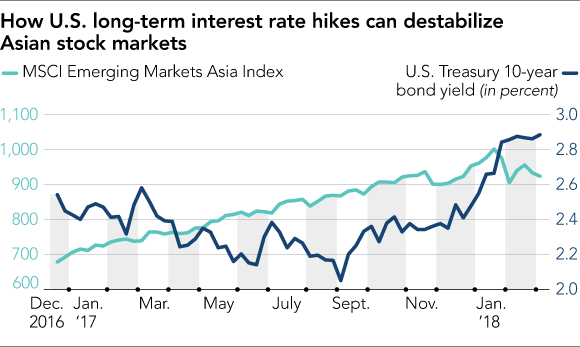 Last year, when U.S. long-term rates were low and stable, Asian stocks kept climbing. The reversal in February coincided with a flare-up in U.S. inflation concerns, with the 10-year Treasury yield jumping to 2.8% at one point.

The conditions were ripe for an outflow of funds from Asian markets -- the dreaded vacuum effect. The Institute of International Finance reported that a net $4.5 billion streamed out of Asian and other emerging economies' securities markets in February. This was the first net outflow on a monthly basis since November 2016.

You can almost hear the echoes of the Asian financial crisis that battered emerging economies 20 years ago. In July 1997, Thailand's currency and stock prices tumbled on heavy short-selling by hedge funds. The crisis spilled over into Indonesia, South Korea and other Asian countries, and spread to Russia in 1998 and Brazil in 1999.

For now, few economists say Asia is on the verge of another crisis.

At a conference hosted by Mizuho Research Institute in Tokyo in late February, participants concluded that the chances of 1997-like chaos are slim. The reasoning? It is now harder for speculators to target Asian currencies, thanks to the widespread adoption of floating exchange rates. Macroeconomic policy now emphasizes stability in current accounts. Countries have amassed big forex reserves. And several currency-sharing arrangements are in place for emergencies, such as the Chiang Mai Initiative. The normalization of Western monetary policy will apply "tremendous pressure" for a "huge capital reversal" from Asian economies, conceded J. Soedradjad Djiwandono, governor of Indonesia's central bank during the Asian crisis and a professor at the S. Rajaratnam School of International Studies in Singapore. "However, I still believe that Asian economies could weather these pressures to avoid the catastrophe of 20 years ago."

Are there blind spots?

Bank of Thailand Gov. Veerathai Santiprabhob, speaking with the Bangkok Post, issued a warning to overly optimistic market players. "The correction is a wake-up call for all parties, including operators, investors and risk appraisers, to not be complacent when they see low volatility or risk in the market," he was quoted as saying in a report published in February.

The lack of volatility and apparent risk is the result of the U.S., European and Japanese central banks running huge monetary easing programs in sync. Now that the Fed and ECB have turned toward normalization, it may not take much to spark turmoil with consequences for the real economy.

Money supplied by the Fed, ECB and Bank of Japan through quantitative easing will drop to zero on a net basis in October 2018, according to the estimates of Ayako Fujita, senior economist at Nomura Asset Management. She cautioned that the "market will likely become overly susceptible" to triggers as a result. 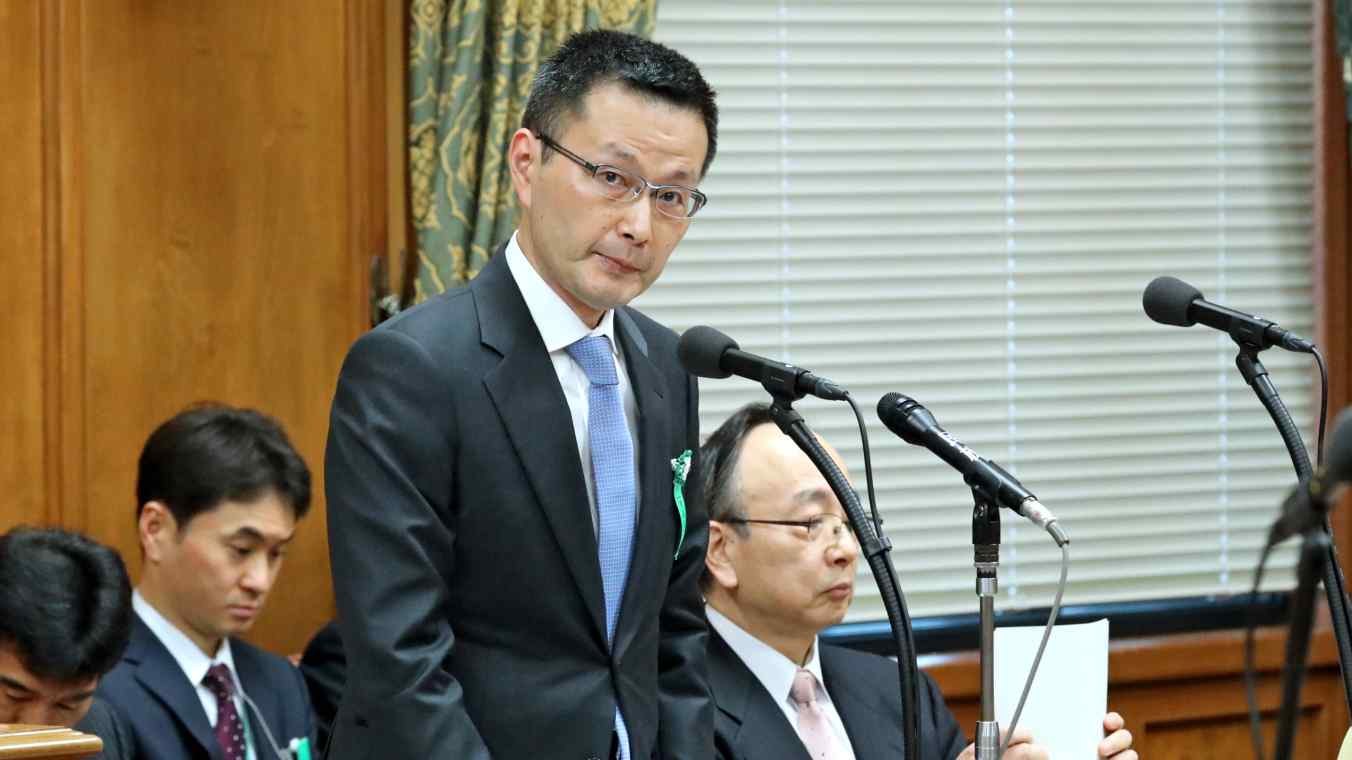 Many experts say investors have a tendency to ignore fundamentals and overshoot. To an extent, the plunge in the value of the Thai baht in 1997 can be blamed on an initial overreaction to a flurry of sell orders by hedge funds.

Even if the region is not destined for another crisis, the monetary shift in the U.S. and Europe is pushing interest rates higher in Asia, clouding the economic outlook. China, not surprisingly, warrants particularly close attention.

Consider a Japan Center for Economic Research report published in late February. Concerns about higher U.S. long-term rates pulling money out of Asia, JCER argues, could force China to raise interest rates to prevent the yuan from weakening against the dollar. This presents a major challenge for the People's Bank of China, which is on the cusp of a leadership change after about 15 years under Gov. Zhou Xiaochuan. 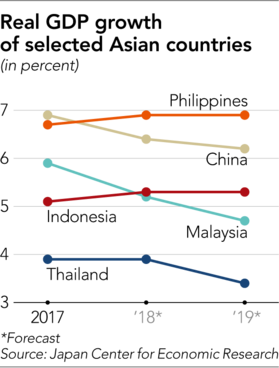 Chinese corporate debt hit 167% of gross domestic product at the end of June 2016, up from 97% at the end of 2007, prompting the International Monetary Fund to sound the alarm. A rate hike would compound the debt problem, with higher interest payments potentially causing a wave of company failures, damaging the economy.

Economic woes in China, in turn, would hurt Southeast Asian economies that rely on exports to their huge neighbor.

"We can control economic and financial risks," Chinese Premier Li Keqiang assured the National People's Congress, which convened on March 5. But while Beijing keeps up appearances, the JCER report suggests conditions in the region are becoming harsher.

Reflecting China's deceleration, the growth of four core Southeast Asian economies -- Indonesia, Thailand, Malaysia and the Philippines -- is expected to level off. The four nations' real rates are projected to average 5.2% in 2018 and fall to 5% in 2019. Thailand and Malaysia, which heavily depend on China, face more abrupt slowdowns than the other two. Trucks at Laem Chabang Port in Thailand: The country depends heavily on exports to China. (Photo by Takaki Kashiwabara)

As the clouds gather, individual investors voice a mix of optimism and anxiety.

Rommel Songcou, a 45-year-old retail investor in the Philippines, is telling friends that the market decline presents an opportunity to find bargains.

Another Filipino investor, 28-year-old Miguel Ricalde, is not so sure. He began buying stocks four years ago and holds shares in two midsize companies. "I believe our economic fundamentals are great," he said. Yet he is "thinking about selling all of [his shares] in exchange for cash."

Much will depend on what the Fed does next.

In his remarks to Congress, Chairman Powell struck a more hawkish note than the market had anticipated. Most Fed watchers had been expecting three rate increases this year, but now many are predicting four. The next two-day Federal Open Market Committee meeting is scheduled for March 20.

For Asia's veteran and new central bank governors, the stakes are as high as they come. A misstep could cause the regional economy -- the world's growth engine -- to falter.