DHAKA -- Until recently, outward investment was something corporate Bangladesh could only dream about. But a loosening of government controls has prompted a raft of proposals for overseas expansion as companies seek to diversify earnings.

In October, Bangladesh's cabinet gave permission to Akij Group, a conglomerate, to buy Robin Resources, a Malaysian fiberboard and composites maker, for $80 million. Akij, which has interests in those sectors as well as in food and beverage, tobacco, cement, jute and textiles, was allowed to transfer $20 million to Malaysia to part-finance the acquisition, with the balance to be paid through offshore borrowings.

"We're experienced in Bangladesh," said Shamsuddin Ahmed, chief financial officer of Akij Group."Now we want to further extend to the foreign land. We want to project Bangladesh on foreign soil." Approval was conditional on continued employment requirements in Bangladesh, and the repatriation of overseas profits.

Until 2015, Bangladeshi companies were all but forbidden from making investments overseas because of government controls intended to focus available capital investment on domestic development. However, controls have been relaxed since the South Asian nation of 160 million was accorded Lower Middle Income status by the World Bank in July 2015, indicating that average annual income per capita had reached $1,026, measured by the bank's gross national income formula at 2011 values. 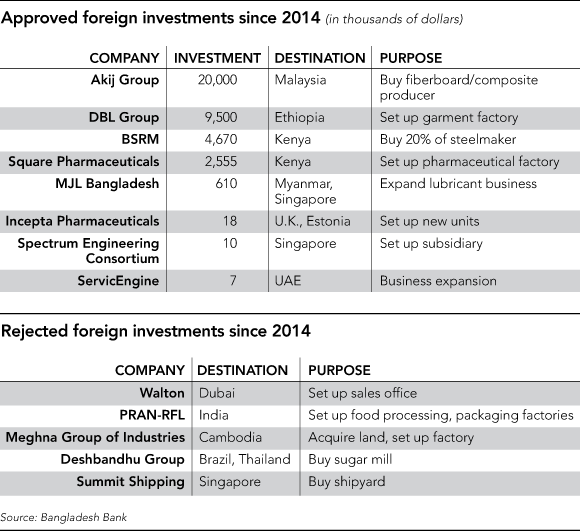 The government amended the country's 1947 foreign exchange regulations in 2015, paving the way for capital account transactions, and offshore investment applications have since been considered on a case-by-case basis. Up to half have been rejected, and even the largest Bangladeshi companies remain little known outside the country. However, that could start to change as they begin spreading their wings abroad.

Central bank officials say they have drafted an "overseas investment policy" that will be finalized soon with the objective of formalizing the outward investment regime, replacing the current ad hoc approach. In the meantime, a cabinet committee on economic affairs will consider outward investment proposals based on central bank recommendations, according to Eunusur Rahman, secretary of the government's Financial Institutions Division. Apparel producer DBL Group is opening a factory in Ethiopia to take advantage of that country’s preferential access to export markets. (Photo by A.Z.M. Anas)

Companies that have recently gained approval for overseas investment include DBL Group, a textile and clothing producer, which is spending $9.5 million to set up an apparel factory in Ethiopia that will become operational in April 2018. DBL employs 30,000 people in Bangladesh and 1,700 in Ethiopia.

Mohammed Abdul Jabbar, managing director, said that although labor was still cheaper in Bangladesh, DBL had been lured to Ethiopia by its preferential market access to the U.S. -- Ethiopian goods are eligible for duty-free access under the U.S. African Growth and Opportunity Act. "We're global," Jabbar said. "We can now have same kind of competition with international suppliers and claim 'global' price. Buyers can't give us any price they want."

Other companies that have received official approval to begin operations outside Bangladesh include BSRM Group, a Chittagong-based steelmaker, which applied in 2016 to invest $4.67 million to buy a 10% stake in a Kenyan steel company. However, the group, the country's largest steelmaker, has not yet deployed the funds. "Studies are still going on, and when everything is clear we will invest," said Aameir Alihussain, managing director.

Bangladesh has made significant economic progress in recent years, averaging annual growth in gross domestic product of 6.2% between 2007 and 2016. Moody's, a ratings agency, praised the country's economic performance in a review in April, noting its "robust and stable growth performance" and "relatively low government debt burden."

Ajit Kumar Paul, a senior official of the Bangladesh Investment Development Authority, the state investment promotion agency, said Bangladeshi companies were ready to expand outward. "Outbound investment is a need of the hour. We're now mature," he said. Paul said that priority should be given to companies that have foreign currency income.

However, years of heavy-handed government controls have crushed the global ambitions of many Bangladeshi companies. PRAN-RFL, a diversified conglomerate, applied repeatedly for permission to build several food processing and packaging plants in India, but the central bank blocked the proposals.

Deshbandhu Group, a commodities company, sought permission in 2011 to set up a sugar mill in Brazil or Thailand, but was also blocked by the central bank. A number of other companies, including Summit Group, Meghna and Walton, have also failed to secure approval to invest overseas. In each case, the central bank said the proposals lacked detail, ruling that the desire to invest overseas was not sufficient.

Two major applications currently before the central bank will provide a strong indication of how far the state authorities are prepared to liberalize. Nitol Niloy Group, a vehicle producer, is seeking permission to invest $7 million in Gambia's banking sector, while Ha-Meem Group, a textiles producer, wants to spend $10.44 million to establish an apparel factory in Haiti. Both deals are awaiting approval. Nitol Niloy is also planning a further application for a $50 million investment in the Indian textiles industry.

Business leaders are pushing the government to liberalize further. Hafizur Rahman Khan, president of the International Business Forum of Bangladesh, said the government should allow more companies to invest overseas, perhaps with conditions such as those imposed on Akij.

"Remittances from wage-earners alone are not enough," Khan said, referring to Bangladesh's significant inward flow of funds from citizens who have migrated to work overseas. "We need to boost foreign exchange income through outbound investment, as this will help bring in dollars."

Some critics oppose widespread liberalization, arguing that domestic private investment remains sluggish. Mirza Azizul Islam, a former finance minister, said that private investment has hovered between 21% and 22% of GDP in the past eight to nine years, which equates to roughly $47 billion a year.

"Outbound investment is not desirable," said Islam, who teaches economics at BRAC University in Dhaka. He said that if investment outflows increased, foreign exchange reserves would be drained, which could expose the country to exchange rate problems.

"[The] open capital regime had a role in the Asian [financial] crisis of 1997-98," Islam said. However, he added that outward investment should be allowed in certain sectors on a "limited scale."

Sadiq Ahmed, vice chairman of the Policy Research Institute of Bangladesh, a think tank in Dhaka, said that "genuine" investors should be allowed to invest overseas, but that the government should monitor deals closely.

"You can't halt capital flight with regulations. If companies can't make profits in Bangladesh, they will find a way out," said Ahmed, a former South Asia regional director of the World Bank. The best way to fight capital flight is to improve the investment climate by simplifying local regulations, he said.

Bangladesh is one of the world's worst places to do business, having slipped by one rank to 177th of 190 economies in the World Bank's latest global ease of doing business rankings.

However, beneficiaries of the recent liberalization remain bullish about future overseas prospects. DBL is considering building a factory in America to make garments such as sweaters. Jabbar, who was educated in the U.S., said he was excited by the prospect of labeling clothes with a "made-in-America" tag.