HONG KONG -- The economies of China, India and Indonesia are digitizing fast, but their populations may not be well equipped to reap the benefits of a world experiencing rapid globalization, urbanization and technological innovation, according to a survey that rates how well countries prepare their future workforce.

The Economist Intelligence Unit examined 35 economies, including 12 in the Asia-Pacific region, for its Worldwide Educating for the Future Index launched Tuesday. The London-based research firm ranked New Zealand, Singapore, Japan, Australia, South Korea and Hong Kong as above average -- most of them wealthier areas with smaller populations. The lower half of the index included Taiwan, the Philippines, Vietnam, India, Indonesia and mainland China.

The index covers countries and territories that combine for over 77% of the world's population and 88% of gross domestic product. It highlights creative, analytical, Trisha Suresh, senior consultant at the Economist Intelligence Unit, discusses the Worldwide Educating for the Future Index in Hong Kong on Sept. 19. (Photo by Joyce Ho)

entrepreneurial, leadership, interdisciplinary, digital and technical skills as well as global civic awareness as the core competencies for fulfilling future demands of work and life.

The preparedness gauge, which targets input into youth education rather than output such as test scores, carries a 50% weighting for the teaching environment, 30% for policy environment and 20% for socioeconomic environment. 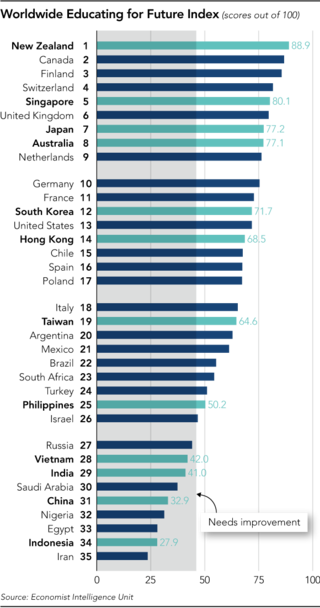 "Some of the larger, more populous countries in Asia-Pacific like India and China and Indonesia are in the bottom half of the countries of the index. That is a real big call to action," Trisha Suresh, Hong Kong-based senior consultant at the Economist Intelligence Unit, told reporters Tuesday. "These are large workforces that can potentially be not competitive, and not ready for what is to come tomorrow."

By contrast, New Zealand topped the global survey with 88.9 points, while Singapore was second among Asia-Pacific economies and fifth overall at 80.1.

Suresh, who designed the index and oversaw its data compilation, said many of the Asia-Pacific underperformers fell short of "the right policies" for education development. Though their policies might "make some mention" of skills for the future, she said, they were "not comprehensive" and often lacked milestones, action plans or proper execution.

Many of these lower-income countries also are still playing catch-up in providing basic education, which inhibits them from emphasizing future-oriented skills.

"They are still trying to develop education programs that are focused on good reading, writing and math skills. That's important to first get right before you start thinking about developing some of these future skills," Suresh said. But she noted that these countries have late-mover advantages in identifying best practices that work in other environments despite resource constraints. democratic political system generally fared better, whereas authoritarian regimes such as China were weighed down by poor performance in the socioeconomic categories, which draw from a society's openness and level of press freedom.

This year's Yidan Prize for Education Research went to professor Carol Dweck at Stanford University in California for her work on the "growth mindset," which has become a widely adopted concept in the classroom to help children realize their full potential.

The Yidan Prize for Education Development was awarded to Vicky Colbert, founder and director of the Colombian organization Fundacion Escuela Nueva, for her project using the "learner-centered" model to deliver cost-effective education, which has shown to be effective in providing high-quality schooling in rural areas.