YANGON -- The World Bank's forecast on Jan. 30 that Myanmar's economy will grow by more than 7% annually for the next three years might appear to be overly optimistic.

In the latest issue of its Myanmar Economic Monitor, the World Bank said that while growth would most likely be around 6.5% for fiscal year 2017 (ending March 31), it would then accelerate on increased investment in infrastructure and sectors such as hospitality. The adverse effects of floods in 2015 would wear off, particularly in the agricultural sector, which accounts for about 60% of the workforce and nearly 40% of the economy.

In 2015/16, the final year of the previous administration headed by President Thein Sein, Myanmar's annual growth was 7.3% -- a significant increase from the 5.5% reached in 2011/12, the first year of Thein Sein's presidency. "The World Bank forecast is somewhat at odds with the mood in the local business community," said Stuart Larkin, a Yangon-based economic consultant. A prominent Myanmar economist, who asked not to be identified, said that while the World Bank's growth estimate would be achievable if local and global economic conditions were favorable, a slightly lower growth rate is more likely.

Sean Turnell, an adviser to the ruling National League for Democracy party and an economist at Australia's Macquarie University, said that slowing global growth, particularly in China and Thailand, would likely affect economic prospects in Myanmar.

"Global growth is slowing, but even more so amongst Myanmar's principal trading and investment partners," Turnell said.

China and Thailand accounted for 63% of Myanmar's exports and 60% of its imports in 2015. China was the biggest foreign investor in Myanmar, while Thailand came third after Singapore, according to data published by the Directorate of Investment and Company Administration, a Myanmar government agency.

But Thailand's economic growth slowed from nearly 7% in 2012 to less than 1% in 2014, when the army seized power, before recovering to 2.8% in 2015. Chinese growth was the lowest in 26 years in 2016 at 6.7%. Economists frequently question the veracity of China's economic data, but this figure still represents a colossal expansion in absolute terms, as the mainland is the world's second biggest economy after the U.S.

Uncertainty about Myanmar's growth prospects has increased with U.S. President Donald Trump's criticism of globalization and free trade, and his demands for U.S. companies to invest and produce at home.

Lower growth in Myanmar will likely lead to an increased focus on the efficacy of government economic policy. A growing number of critics have taken aim at the NLD for its apparent reluctance to disclose detailed economic policies. The NLD issued a brief economic manifesto before its landslide victory in the November 2015 elections, and then published a 12-point plan in June 2016, three months after it took office.

But the government has more recently triggered international concern over security policies, particularly over an army crackdown against the minority Rohingya Muslim population in northern Rakhine state, close to the border with Bangladesh, and the escalation of conflict in ethnic areas, particularly in northern Shan and Kachin states.

The World Bank skirted such political strife in its latest report, including the recent "clearance operations" against suspected Islamic militants in Rakhine state. It said the government had to navigate "a difficult economic and security environment in its first six months in office," but added that policy-making needed to improve. "As investors remain cautious... Myanmar's new government [should] take steps to improve the clarity, communication and credibility of its economic policies," it stated.

Vicky Bowman, director of the Myanmar Center for Responsible Business, said that the country's prospects of growing by more than 7% from 2017/18 "will require clearer policies, better regulation and more transparent and faster government decision-making than we have so far seen."

Even if Myanmar fails to achieve the World Bank's growth estimate, it would still compare favourably with the performance of most other economies, including those in the rest of Asia. Myanmar has room to make up for time lost during five decades of military dictatorship, when the economy was dominated by the sale of natural resources and cosy ties between big businessmen and military-run companies. 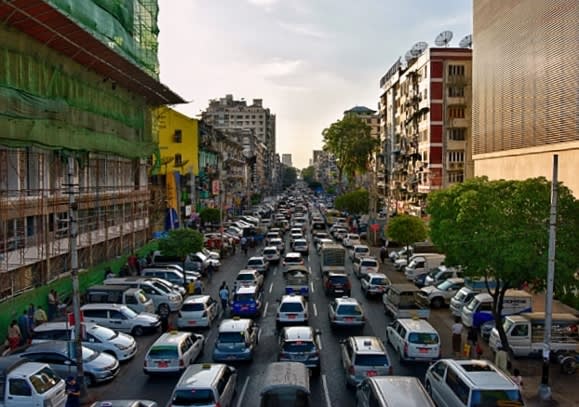 "Myanmar is still among the fastest growing economies in the world, and this is likely to continue regardless, with the country still exploiting 'catch up' growth across a range of sectors," Turnell said.

Another potential source of growth is the huge but backward agricultural economy, by far the country's biggest employer. But productivity is low, according to the World Bank. In a Myanmar rice farm, for example, "one day of work generates only 23kg of paddy in Myanmar, compared to 62kg in Cambodia, 429kg in Vietnam, and 547kg in Thailand," the report noted.

Boosting productivity "could significantly raise rural incomes and reduce overall poverty and malnutrition," wrote Adam Kennedy of the International Food Policy Research Institute. But Kennedy added, "doing that will require large amounts of investment by government and private agro-enterprises of all sizes."

If Myanmar's economic growth falls short of expectations, it would most likely be due to reduced foreign investment, which amounted to $6 billion during the first eight months of the NLD government that began on April 1, according to official data released on Jan. 23. If those investments are realized, that could put Myanmar close to the record $9.4 billion foreign investment received in fiscal year 2016 under Thein Sein.

"Downside risks to the growth outlook mainly stem from the possibility that actual FDI [foreign direct investment] inflows could be lower than originally anticipated," said Chaipat Poonpatpibul, lead economist at the ASEAN+3 Macroeconomic Research Office, who in January led a consultation visit to Myanmar.

Following the merger of the foreign and domestic investment codes in late 2016, the next expected policy reform would be revision of the companies law to possibly allow foreign investment in local businesses. This could be approved in the first half of this year after Myanmar's parliament reconvened in January.

But some analysts believe that the latest investment figures seem to include deals concluded before the NLD took office, or could represent an investment surge to get deals done before the NLD government enacted new policies.

"The investors knew that we were also drawing up the new investment law that does not favor tax holidays, and most investors decided just before the NLD takeover to capture these benefits. Then, we got what was left after the early rush and the newly released investment law just confirmed the scrapping of tax holidays," said the Myanmar economist.

The $6 billion FDI figure referred "to committed/approved amounts and are not yet the actual inflow of foreign direct investment," said Chaipat.

Foreign businesses opening offices in Myanmar or bringing in foreign staff may have to contend with onerous and complicated work-permit application requirements exceeding those of red tape-heavy neighbors such as Indonesia. Proposed requirements include a rule that a foreigner working in Myanmar must seek official permission to travel around the country for more than 24 hours.

The proposed rules have been widely criticized by foreigners, but the government seems set on defending them, ahead of their consideration in parliament.

"The government wants to attract skilled workers in white-collar sectors. We are trying to promote a balanced policy between the foreign worker and the local worker," said Zaw Htay.

Investment prospects could also prove problematic because some of the more lucrative sectors have already been tapped. Foreign banks and telecommunications companies were granted access to Myanmar after economic reforms were introduced by the Thein Sein administration from 2011.

But the "catch up" and "low base" factors remain relevant for businesses looking for niches in Myanmar.

"Myanmar's market is in its infancy in many ways, and opportunity exists in a wide range of sectors," said Nelson, who cautioned that Myanmar's "frontier" status means that American businesses "are likely to move slowly" despite the U.S. decision to remove its remaining economic sanctions on Myanmar in September 2016. The sanctions imposed against Myanmar's military rule were gradually eased after a quasi-civilian government took office in 2011.

Macquarie University's Turnell believes that upcoming policy changes will encourage additional foreign investment. "With a few signature economic reforms to come -- electricity generation, foreign insurance -- and the lagged effects of the sanctions easing, I would expect a bit of a boost to FDI in the second half [of 2017]," he said.

"We expect Myanmar's growth to recover and continue to be one of the fastest in the region, with medium-term growth boosted by manufacturing in special economic zones," said Chaipat, referring to recently opened zones such as Thilawa, a Japanese-backed factory hub outside Yangon that drew about one-sixth of the $6 billion FDI into Myanmar during the lifetime of the current government, according to DICA.