Signs advertise an ATM machine that trades currency for bitcoins, a digital currency, in a coffeehouse in Vancouver.   © Reuters
March 18, 2016 15:00 JST | China
CopyCopied

TOKYO -- Digital currencies are beginning to make their way into the traditional territory of central banks.

"Will there be a Chinacoin?" was a question excited bitcoin fans were asking after hearing that the People's Bank of China, the country's central bank, said in January it would consider issuing a digital currency.

But the Bank for International Settlements does not think so. In a paper published in November, it noted that one option for central banks is to issue digital currencies in response to the growing use of them.

The key technology underpinning bitcoin is the blockchain, which allows all participants in the bitcoin community to share transaction records and approve each other online. Bitcoin, therefore, does not have an administrator, such as central or commercial banks in the conventional sense, that keeps transaction records and approves their authenticity.

The blockchain technology is creeping into the traditional banking system in various ways. Honduras and Estonia are 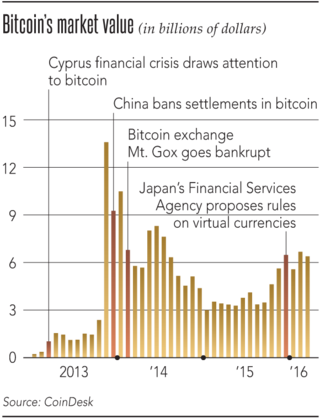 now considering using the technology for registration and settling securities transactions. "The world of financial settlements may undergo something similar to overseas calls being overtaken by voice transmission over the Internet," said Nobuyuki Kinoshita, a former Bank of Japan executive director.

Changes are also happening in developed countries. Last year, the Monetary Authority of Singapore announced a plan to use 225 million Singapore dollars ($165 million) for studying a record-keeping system based on the blockchain technology, among other things. Meanwhile, the Bank of England has asked for public comments about how to make positive use of the technology.

On Wednesday, the BOJ made its belated move. In a report on payment and settlement systems, the bank mentioned, for the first time ever, the rise of fintech, or financial technology, saying it is "in principle a welcoming trend" as long as it helps to enhance existing financial systems.

On Thursday, the BOJ took up the issue of digital currencies and the blockchain at a forum on settlement systems. Startups such as bitFlyer, a bitcoin exchange operator, and CurrencyPort, which offers mobile settlements, participated.

Settling is not the only area where digital currencies are having a profound impact. In a November report, the Bank for International Settlements warned that if the shift from the existing banking system toward digital currencies accelerates and makes the connection between sovereign currencies and their digital cousins weaker, "monetary policy may lose efficacy."

With the BOJ, a rapid spread of digital currencies that cannot be exchanged for the yen may make it difficult to keep track of the monetary base and other indicators that it uses for policymaking.

"If the line between reality and virtual gets blurred, it will become hard to understand the actual condition of the economy," said a BOJ executive.