HONG KONG -- China may have become more cautious on its mounting corporate debts, but it has no intention of slowing its investments in the Belt and Road Initiative, with the country's biggest foreign investment bank committing $250 billion in loans to the trade plan -- an amount larger than the annual gross domestic product of Greece or Finland in 2016.

On Monday, Hu Huaibang, chairman of China Development Bank, told a panel at the Asian Financial Forum in Hong Kong that the bank had extended $110 billion in loans to projects along the ancient trade route by the end of 2017.

The Chinese bank, which has assets of $2.4 trillion, was set up to provide medium-to long-term loans to the country's major economic and social development projects.

It is also the world's largest development finance institution. The bank falls under the direct leadership of the country's State Council and is financially backed by the Ministry of Finance and Central Huijin Investment, China's largest investment company. "China is at the center of global supply chain. Many countries want to take advantage of the [Belt and Road] Initiative," Hu said.

Proposed by President Xi Jinping in 2013, the trade initiative spreads across more than 60 countries in Asia, Europe and Africa, and is dubbed "China's Marshall plan," in reference to the American aid project to help Western Europe rebuild after World War II. 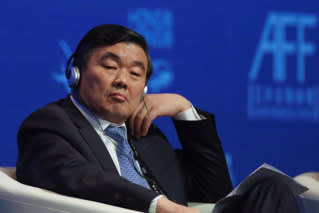 Between 2014 and 2016, China invested $50 billion in countries that are involved in the initiative, with trade volumes reaching $3 trillion, he revealed. Hu estimated that China would invest another $150 billion in the next five years and import products worth $2 trillion from these countries.

While China seems to be holding to its grand trade plan, however, the chairman of another Beijing-led policy bank emphasized that profitability was the first criterion of his institution when it selected projects to fund.

"We are not going to do loss-making business," Jin Liqun, chairman of the Asian Infrastructure Investment Bank, said on the same panel.

The bank, which was set up in 2016, is tasked with offering finance for infrastructure projects in Asia as part of the BRI. "We want to make sure the projects are good ones and they would be able to generate revenues," he said.