In China, corporations have floated bonds to raise money for infrastructure projects including railway construction.   © Reuters

SHANGHAI -- Chinese companies have issued just 980 billion yuan ($143 billion) in bonds so far this year, less than half the 2.2 trillion yuan during the January-June period last year, as monetary tightening needed to relax a housing bubble brings unpleasant financial side effects.

The 2017 figure, based on data from Chinese research firm Shanghai DZH, excludes short-term commercial papers. State-owned businesses contribute more than half of China's corporate bond issuances, typically using them for infrastructure projects such as building railways. The total of 2 trillion yuan expected for all of 2017 stands far below 2016's figure of 4.2 trillion yuan.

Interest rates have risen as China's central bank has shifted to a "prudent and neutral" monetary policy from the previous "prudent," embarking on moves such as hiking interest rates for open-market operations, through which the bank manages the money supply.

One-year interbank interest rates stand at 4.4%, nearly 50% higher than the 3% rate seen a year ago. When interest rates rise, prices of bonds already issued decline. More than a few investors have taken on paper losses from rising interest rates, and this also has contributed to lackluster investment in bonds.

The average interest rate on a one-year corporate bond has risen to 5.5%, topping last year's 4.6%. Tianjin Hi-Tech Holding Group, a state enterprise affiliated with the city of Tianjin, issued one-year bonds in early June with a rate of 7% -- a major increase over the 5.5% rate on five-year bonds it issued in October 2015, despite the more recent bonds having shorter maturities and adding up to a lower value. 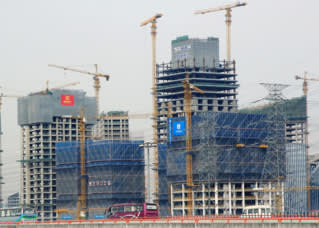 Lending rates also are rising at banks, an important resource for companies that have put off floating bonds. One major bank this month loaned to a business at nearly 10% over the basis rate decided by the central bank, despite the company's high credit rating, a source said.

The basis one-year lending rate is 4.35%, meaning that loan would have carried a price tag of around 4.7%. Until last year, loans typically carried rates below the basis rate. But businesses face a new procurement environment. Depending on the borrower, interest rates on some loans apparently reach as much as 20% above the basis rate.

Beijing's monetary tightening is intended not only to defuse the real estate bubble, but also to suppress so-called shadow banking. In China, regional banks receive funds in interbank markets. Opaque loans are seen as fairly common at banks with loose internal governance. The government thinks raising interest rates will put pressure on regional banks, reducing off-book lending and other such practices.

China's present economic strength allows such tightening tendencies. The country's real gross domestic product grew 6.9% on the year in January-March, surpassing the government's full-year goal of 6.5% growth. Healthy exports in April and May supported the economy. Beijing appears to have prioritized staving off risk through monetary tightening, even at the cost of some deceleration.

But the supply of funds is weakening rapidly, as shown in part by the growth in China's M2 -- a measure of money supply including cash and deposits, plus highly liquid noncash assets -- falling in May to the lowest since 1997. Concerns are building over the economy's health for the second half of 2017, but Beijing's hands are tied: Should the government ease up now, this effectively would let the real estate bubble and shadow banking continue.