Crisis is just around the corner: Trichet 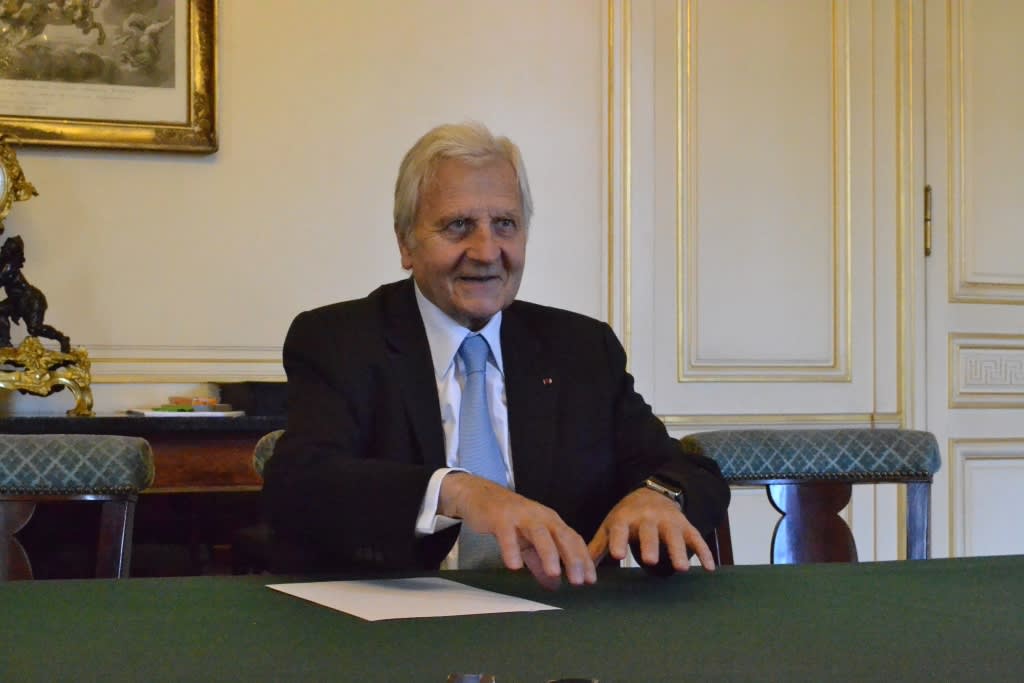 Paris -- Jean-Claude Trichet, former president of the European Central Bank, warned of ballooning global debt in a recent interview with the Nikkei, saying: "Be very careful. A new crisis can occur." The debt-to-GDP ratio, which has been rising primarily in emerging markets, is sending such signals, he said.

"I consider that an important indicator of economic and financial vulnerability, at the level of the global economy, would be the proportion between the overall outstanding global public and private debt as a proportion of the overall GDP," he said. The ratio increased as much as 25 percentage points between 2000 and 2007, from 250% to 275%. The jump was partly responsible for the global financial crisis. After the crisis, the figure is still rising, rather than falling, reaching 300% today.

The ratio rose not just because the world's major economies increased fiscal spending. As the central banks of Japan, the U.S. and Europe kept monetary policy at an unprecedentedly accommodative level, vast amounts of idle money flooded into private companies in emerging countries. "[T]his indicator is suggesting, at a global level, that we are at least in the same situation of systemic global vulnerability that we had in [2007 and 2008], perhaps even more because the indicator has augmented," Trichet said.

In many rich countries like Japan, public-sector debt is a serious problem. But Trichet is more focused on emerging countries such as China. "Now in the emerging economies in general, a jump of the indebtedness of the private sector is observed," he said. As for China, "the state-owned enterprises and the size of the outstanding loans for state-owned enterprises is an important problem, taken seriously by the Chinese government, but a lot has to be done. Also to be noted is a phenomenon quite impressive, which is the augmentation of the issuance [of] corporate bonds in China. This calls for very attentive monitoring," he said. Trichet emphasizes a point during the interview.

It appears that the current precarious situation was brought about by the Japanese, American and European central banks with their prolonged ultra-loose monetary policies flooding the world with extra money. But, Trichet said: "[T]here is no doubt that whatever decision you take, and this is true in monetary policy as well as in all decision making processes, you have the positives and the negatives of the decisions. [W]e have to be conscious of the counterproductive consequences of the ultra-accommodating policies. They are there, it is undeniable, even if again the central banks were right to do what they did and are right to do what they do."

That makes it all the more necessary to exit the unprecedentedly loose monetary policy as soon as possible. And to do that, "the importance of the other partners, governments and parliaments, entrepreneurs and unions should not be forgotten or underestimated," Trichet said. He also warned about the persistent reliance on easy money policy: "I cannot consider that the central banks are alone. A good deal of the questions which are asked are formulated as if the central banks were alone. But if the central banks were really alone, they would never win."

Trichet offered three explanations for why economic recovery has not translated into inflation in Japan, the U.S. and Europe. First is that rich countries constantly face competition from the emerging world thanks to globalization. Second, technological innovation has spread to all corners of the world, and production lines are under constant pressure to re-adapt, which is causing employees to "see that what is much more important than pay increases is to keep their jobs," Trichet said. Third, and related to the first two points, is that workers' negotiating power has weakened significantly. These are not one-off factors stemming from the financial crisis but should rather be treated as long-term issues. It will take an all-out war, including structural reform at the government, to beat these problems.

"What is absolutely sure is that the ultra-accommodative policies cannot last forever," Trichet said. Central banks' balance sheets have been growing continuously, and the effect of easy money policy is getting closer to its limit. Someday, easy money policy and accumulation of debt must end. The U.S. Federal Reserve has already ended its quantitative easing, or QE, program and began raising interest rates as well as shrinking its overblown balance sheet. The ECB is expected to taper its QE program in January.

Many fear a sudden reversal of money flows can cause a shock. Trichet, however, is optimistic: "I expect all central banks to be cautious and prudent when getting out of the exceptionally accommodating policies." He thinks that investors are prepared, given the U.S. efforts to exit the QE program, and believe that there is no reason to fear.

"I would say that all central banks in the world have done a very good job," Trichet said. Central banks have long fought not just persistently low prices but also the myth that monetary policy can solve everything. As their policy reaches its limit and comes to a crossroads, perhaps it is time governments and entrepreneurs looked at the reality. Trichet's calls for not letting central banks be isolated are likely the reflection of his own lonely struggle.