A cashier stacks bank notes at a bank in Chandigarh, India. The rupee is at a two-year high, posing a threat to manufacturing.   © Reuters
TAKASHI NAKANO and AKIRA HAYAKAWA, Nikkei staff writersSeptember 19, 2017 12:05 JST | China
CopyCopied

SINGAPORE/MUMBAI -- Pasir Panjang, a port in southern Singapore, is bustling with activity. Total container throughput in August rose 9.9% on the year to 2.94 million TEUs (twenty-foot equivalent units), according to the Maritime and Port Authority of Singapore. This puts the city-state on track for its highest annual container-handling volume since 2014. Exports still underpin many Asian economies. The Japan Center for Economic Research has revised upward its 2017 real growth projections for China to 6.7% and to 5.0% for Malaysia, Thailand, the Philippines and Indonesia, citing expanding exports of such items as electronics parts for smartphones.

Growing exports, however, are generating a concern for governments and central banks: currency appreciation.

When companies are paid in dollars for their exports and then convert that cash into local currencies, the values of those currencies rise. The Malaysian ringgit has climbed around 5% against the greenback, while the Thai baht and Singaporean dollar have appreciated nearly 4% since April.

India is also enjoying an investment boom. Foreign direct investment in the April-June quarter came to $10.4 billion, a 37% increase on the year that far outpaces the 8% growth in fiscal 2016. Foreign investors were net buyers on the Indian equity and debt markets for seven straight months from February to August, and the trend is continuing in September, keeping the benchmark SENSEX index above 32,000. Global money looking for high returns is flowing into the faster-growing Asian markets.

Looking at the global picture, the U.S. Federal Reserve is gradually raising its key interest rate, while the European Central Bank is preparing to scale back the massive monetary easing it introduced in the wake of the 2008 global financial crisis. Under such conditions, money would normally flow out of emerging economies, and their currencies would fall against the dollar. So why are Asian currencies still so strong? "While it's natural for the U.S. and Europe to tighten monetary policies as their economies are expanding, the Fed's slower-than-forecast pace of tightening is posing less of an impact on the currencies of emerging economies," explained NLI Research Institute economist Makoto Saito, an expert on emerging Asian markets.

For Asian economies, stronger currencies make imported goods cheaper and help stabilize prices. But if a currency becomes too strong against the dollar, it can erode exporters' earnings and drag down economic growth.

Foreign reserves are a useful gauge of Asian countries' concerns. Reserves increase when a country sells its currency to buy the dollar, and fall when the reverse operation is carried out. Although central banks usually do not announce their market interventions, the rising volume of foreign reserves in major Southeast Asian nations and India suggests frequent interventions aimed at curbing currency appreciation.

Earlier this month, Indian ratings agency Crisil downgraded its projection of India's real-term growth for fiscal 2017, which runs through next March, from 7.4% to 7%. The agency sees the rupee, which is at a two-year high, acting as a drag on growth in the manufacturing sector. High currency volatility, including sharp rupee appreciation against the dollar, resulted in a 6.5 billion rupee ($100 million) loss in reported revenues for the April-June period, said V. Ramakrishnan, chief financial officer of Tata Consultancy Services, India's largest IT service provider.

According to a senior official at the Mumbai branch of a major Japanese bank, the Reserve Bank of India has been selling the rupee to prevent its appreciation from hurting the economy.

China burned through a large chunk of its foreign reserves supporting the yuan until last year, but its reserves increased for six straight months through July. The trend is expected to continue until the Communist Party holds its twice-a-decade National Congress in October. 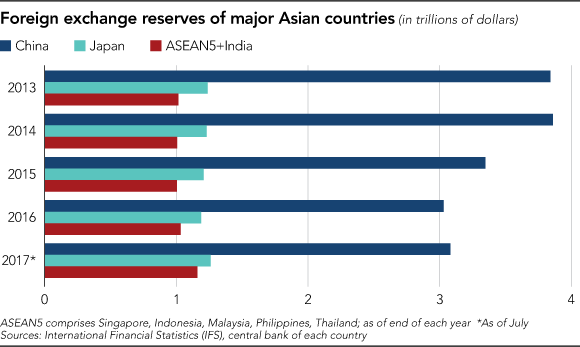 Volatility in the wings

But there is no guarantee that Asian currencies will remain strong. The Philippines, for example, is seeing its currency fall despite annual economic growth of more than 6%. The peso is at an 11-year low against the dollar, mainly because of the prolonged and sweeping operation against Islamic militants on the southern island of Mindanao. Indonesia also faces the risk of Islamist attacks. If persecution of Myanmar's minority Rohingya Muslims in the western part of the country continues, the fallout could spread to all of Southeast Asia. These and other geopolitical risks, including the situation involving North Korea, could throw the currency market into turmoil.

The central banks and governments of some countries are apparently trying to mitigate currency volatility. China's direct investment abroad in the first half of this year dropped 46% on the year to $48.1 billion as authorities imposed restrictions on acquisitions of overseas companies to curb capital outflows and combat the yuan's depreciation. The country's banking regulator has asked lenders to scrutinize loans for foreign acquisitions by five groups active in overseas M&As, including property developer Dalian Wanda Group and investment company HNA Group.

To stem its own falling currency, Malaysia's central bank introduced a regulation last December requiring exporters to convert at least 75% of their proceeds earned in foreign currencies into ringgit. The measure is raising concerns of higher operating costs among foreign businesses operating in the country. Although the ringgit has stopped falling, the central bank has shown no signs it intends to review the regulation.

In August, Indonesia and India decided on their first rate cut since October last year.

Forecasting currency moves is difficult because they reflect not only economic realities but also political and other factors. While current strength in Asian currencies is a reflection of stable economic growth, the next crisis may already be on its way.