POIPET, Cambodia -- Once ravaged by war, the city of Poipet on Cambodia's western border with Thailand is reinventing itself as a manufacturing center, leveraging its cheap labor costs and strategic location in the regional supply chain.

"Many companies will come here, and this is where you will work when you're older," Sok Chenda, secretary-general of the Council for the Development of Cambodia, told a group of 50 high school students during the opening ceremony.

Sok also played up his version of the "Thailand-Plus-One" business strategy, which envisions corporations operating in Thailand setting up additional production facilities in neighboring countries. "We want them to come to Cambodia, not to Myanmar or Laos," he said. 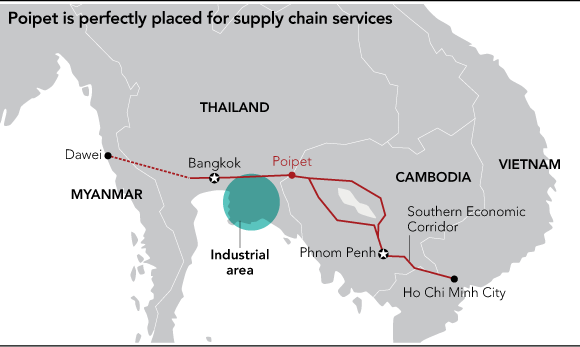 All five tenants run plants in Thailand and are shifting labor-intensive processes to Techno Park. For example, Sanko Electronics, which makes wire harnesses for automobiles, handles the primary processing of wires at its automated facilities in Prachinburi, a province in eastern Thailand.

The company then sends the semi-manufactured goods to Poipet for final processing -- which can only be done by human hands -- such as covering the wires with thin plastic tubes. Thanks to the cheaper labor, even with transport costs, production expenses shrank 20%.

Sumitronics, an electronic component affiliate of trading house Sumitomo Corp., manufactures parts for household electronic appliances in Poipet using material procured from Thailand, and then ships the finished products back to its Thai plant for inspection.

"By manufacturing on the border, we can utilize the road infrastructure of Thailand, which has matured as an industrial hot spot, and cut costs at the same time," said Noriya Mifune, managing director of Sumitronics Manufacturing (Cambodia).

As part of the Mekong region's southern economic corridor running from Vietnam to Cambodia and Thailand, Poipet is especially well positioned as a secondary production hub for companies already operating in Thailand. It takes only two to five hours to drive from Thailand's eastern industrial areas to the Cambodian city.

Cambodia's factory wages are a mere 60% of those in Thailand. With a general election approaching, the Cambodian government decided to raise the minimum monthly wage 11% to $170 starting next year. Even at that level, Cambodian labor is still cheaper than that in Thailand, where finding workers willing to work minimum wage is a challenge. Cambodia will likely maintain its labor cost edge for decades, predicts Toyota Tsusho.

Furthermore, tariffs in Cambodia will be abolished across the board starting in 2018 as the Association of Southeast Asian Nations integrates its economy. Outside the Techno Park, autoparts maker NHK Spring and hard-disk components manufacturer Nidec, both of Japan, also have plants in Poipet.

From minefields to boomtown

The economic activity has quickly transformed the city's landscape. Roads made of clay have been paved, creating more truck traffic. Popular restaurants from neighboring Thailand such as Cafe Amazon and Pizza Company dot the scenery. Japanese restaurants and hotels catering to foreigners are also increasingly setting up shop here. Poipet's population has doubled to over 100,000 in the past decade. Not only are Cambodians streaming into the city to find jobs, migrant workers who crossed the border to Thailand are coming back, said Poipet's Acting Mayor Kan Nara.

Poipet has served as a historical trading hub, but the civil war during the Khmer Rouge era left the place devastated at one point. After Pol Pot's regime collapsed, he and his remnants engaged in prolonged guerrilla warfare here. Land mines lay hidden on the outskirts of Poipet even to this day.

After the civil strife ceased, Poipet entered into a renaissance by becoming a casino town for visiting Thais. The gambling houses created jobs and drew tourists. But what Poipet needs to do next is attract manufacturers that can offer sustainable employment and nurture technical expertise, says Nara.

The government has been busy advancing infrastructure projects, which are vital to pulling in companies. A new, truck-only customs gate is scheduled to open on the border entering Thailand near to the current gate, which has only one lane and is getting more and more congested. A cross-border rail line linking the Cambodian capital of Phnom Penh with Bangkok is due to begin operations as soon as 2018 after a missing 1.5km link through Poipet is built.

Poipet's fledgling industrial area also has its share of problems. For one, Cambodia's electricity bills are about double that in Thailand, and power outages are frequent. Steady power supplies are a matter of life and death to precision parts manufacturers.

Because of the Khmer Rouge massacre, people aged 35 to 45 are few in number compared with other age groups. This is the demographic that normally fills the middle-management ranks.

At any rate, the bulk of Cambodians come from agricultural backgrounds, with little to no business experience. Many companies operating on both sides of the border dispatch skilled staff from Thai factories. Toyota Tsusho is taking advantage of this demand by training local talent and hiring them out to tenant factories.

Trade in the Mekong region around Poipet has become increasingly active. Thailand's imports from Cambodia, Laos and Myanmar have jumped in the past few years. With the evolving international division of labor, goods have been flowing both in and out of Thailand.

According to customs data from Thailand's north and northeast, areas that border the three neighboring countries, the value of exports came to 426.6 billion baht ($13 billion) last year, while imports stood at 168.7 billion baht. Exports were up 40% from 2012, and imports nearly tripled.

Labor-intensive manufacturing jobs are being outsourced to surrounding countries, mainly due to Thailand's rising labor costs. Many Japanese companies also set up factories in Poipet that make components to be assembled in Thailand.

Meanwhile, Thailand is pouring resources into improving productivity through digital means, as well as into attracting new industries such as aircraft and robotics. But those efforts suffer from a lack of highly skilled workers, among other issues.