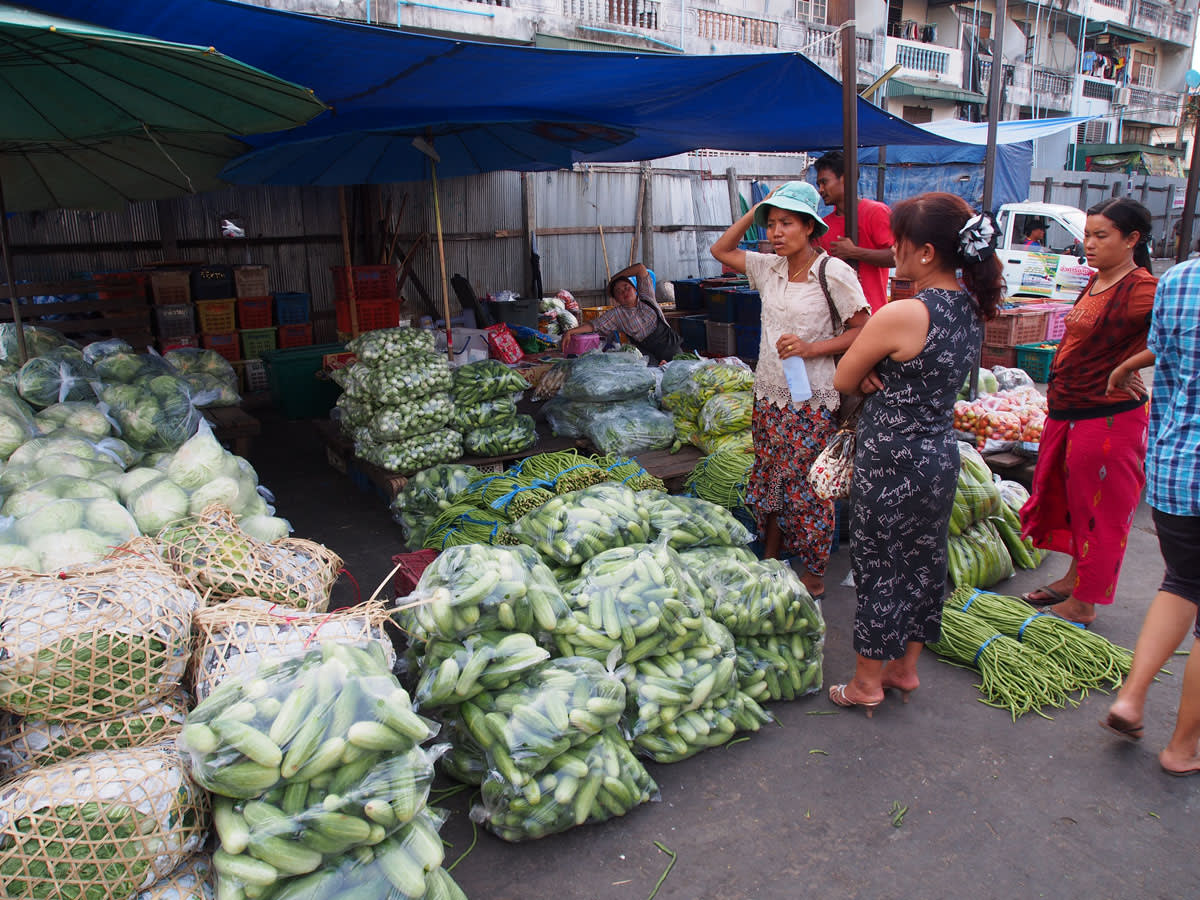 MAE SOT, Thailand -- Periodic gunfire has been replaced by the incessant judder of jackhammers, and businessmen now far outnumber the smugglers and spies who not that long ago plied Mae Sot's streets.

This once remote and wild frontier town is being rapidly transformed into Thailand's premier gateway to neighboring Myanmar and the site of a pioneering economic venture.

In this bustling atmosphere, you would never guess that Thailand, following a military coup last year, is struggling to keep its economy from a downward spiral. "There is no sign of recession in Mae Sot," said Philip Thornton, an Australian author who has lived in the town for more than a decade.

Homes and office blocks are sprouting, a second huge department store, Robinson, is under construction and the number of hotels and guesthouses has soared to nearly 100 as land prices skyrocket. A 1.6-hectare plot of land outside the city center which went for 750,000 baht ($23,000) five years ago was recently sold for 8 million baht.

The first taxis have just appeared on the streets, and the once virtually abandoned airport is being upgraded to international status, although Mae Sot is unlikely to become a major air hub. But it is Mae Sot's location -- together with political and economic shifts within Myanmar and more broadly in the Association of Southeast Asian Nations -- that explains the changes to a once-sleepy and distinctly unglobalized town nestled in a verdant valley between two mountain ranges.

Mae Sot is strategically positioned about halfway between Bangkok and Myanmar's commercial hub and former capital, Yangon. The town will be a perfect trading point once road improvements are completed on the Myanmar end, sitting astride the four-nation East-West Economic Corridor, which seeks to link the Vietnamese coast to Myanmar through Laos and Thailand.

It is also a key way station in plans by various regional governments to create an Asian highway network that would allow road travel across the continent.

Cross-border smuggling around Mae Sot was rife for decades. It was not until the end of Myanmar's half century of military dictatorship in 2011 that legitimate cross-border economic activity took off, sparking Mae Sot's boom. Adding momentum in recent years has been the forging of peace agreements with ethnic minority insurgencies, which had previously turned the Thai-Myanmar frontier into a war zone.

In 2012, the value of border trade through the Mae Sot checkpoint surged 80% to about 39 billion baht. That figure is expected to rise further with the Dec. 31 launch of the ASEAN Economic Community, with its stress on connectivity and freer movement of goods and workers across the borders of its 10 member countries. According to Thai government estimates, cross-border trade through Mae Sot rose to about 56 billion baht in 2014. 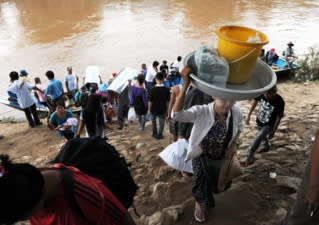 Myanmar and Thai nationals conduct a brisk but illegal trade in people and products across the Moei River at Mae Sot. (photo by Steve Tickner)

An even greater leap forward may come with the government's plans to establish a special economic zone, one of five such pilot projects along Thailand's frontiers aimed at attracting foreign direct investment, generating employment, enhancing Thailand's competitiveness within ASEAN and stopping the smuggling of goods and migrant laborers.

The Mae Sot special economic zone, approved by the Thai cabinet in January 2013, is to be linked to a special trade zone in Myawaddy, the town across Moei River in Myanmar. Already the stream of workers and traders crossing the river is swelling by the month. Kalin Sarasin, secretary general of the Thai Chamber of Commerce, said the economic zone should be open for business sometime this year, although construction on a 900-hectare area north of the town along the river has yet to begin.

"You have to utilize the advantages of both countries -- the excess, cheap labor of Myanmar and the higher value-chain manufacturing in Thailand. I think this will benefit both sides," he told the Nikkei Asian Review in Bangkok. "The Thais will be able to teach Myanmar workers, whose skills are still low."

Small and medium-size businesses are likely to be the major tenants of the new zone, with most investors engaged in food processing; making agricultural machinery, construction material, and automotive parts; and textile production. Mae Sot already has some 300 textile factories.

But Kalin said leading Thai companies have also expressed interest in investing, and that he expected Chinese, Japanese and other foreign enterprises to move manufacturing bases from other parts of Thailand and neighboring countries to Mae Sot and other border areas. But it is still early, and few companies have registered.

The Thai government is offering a range of investment incentives to set up in the zone, including exemption from corporate income tax for up to eight years, duty-free imports of machinery, and approval of foreign ownership of land and employment of foreign experts. Myanmar is offering similar enticements.

Projects to foster growth in the zone and trade generally are already in place or on the drawing board. A potholed 56km stretch of road from Myawaddy to Kawkareik in Myanmar's Karen State has finally been re-engineered, cutting travel time to Yangon and the port of Mawlamyine. On the Thai side, a four-lane highway from the provincial capital of Tak and Mae Sot opened some time ago, while a feasibility study for a tunnel through the mountains between these two points has been completed. A second bridge across the Moei is in progress, with an approach road now under construction.

Despite these efforts, big infrastructure bottlenecks are anticipated, given the speed of Mae Sot's growth. With the large numbers of unregistered residents, accurate population figures are not available, but most sources agree the town and surrounding area have a population well over 200,000.

"Mae Sot today is a trading center and the rural sector still dominates. In the future, it will become an industrial center," Thornton said. "They will have to try to balance the environment and tourism, and there are serious potential problems. Right now it's all mad capitalism, slash and burn. At the moment it's a shortsighted approach."

Both physically and in human terms, the character of Mae Sot has already been greatly altered and more changes are on the horizon.

Given its proximity to the decades-old Karen ethnic insurgency in Myanmar, Mae Sot became a town of refugees and aid workers, exiles and rebels from across the border, undercover operatives from both countries, illegal migrant workers and gangs exploiting them. The town's dark underside has withered considerably, but has yet to disappear.

More than 123,000 refugees from Myanmar still inhabit a string of camps along the frontier, awaiting the day of true peace and reconciliation in their homeland. The closest camp to Mae Sot, Mae La, is home to nearly 50,000 people, with some able to filter out to find work and even settle in the town.

Mae Sot remains the de facto border headquarters of the international aid community, although it has shrunk in recent years by about one-third, according to Thornton. Amid Myanmar's rapid opening, the major nongovernmental organizations have cut funding earmarked for the border and downsized or moved their operations to Yangon.

But for the time being, young volunteers from around the world, long attracted to Mae Sot, remain a part of the scene along with a bewildering melange of townsfolk -- Karen, Shan, Lisu and Hmong ethnic minorities. But it is people from the Myanmar side, not Thais, and especially those from Myanmar's majority Bamar population, who have come to dominate a place often dubbed "Little Myanmar." The vast open air market brims with vendors and goods from Myanmar, and the gems market, probably the largest in Thailand, is run by Myanmar Muslims. Buddhist monasteries replicate those across the border.

Harmony has prevailed among these disparate groups, but with the influx of outsiders, and the intensified economic competition and other tensions that will follow, Mae Sot natives are weighing the pros and cons of the boom.

Many expect improvements in education, health facilities and labor conditions in the factories. Conditions for workers in factories around town have already gotten better in recent years compared with the past, when many migrant workers were subjected to near slave labor, death threats and sometimes murder. Now minimum wage rates are the rule, and sometimes more given the shortage of skilled labor, especially in the construction industry. Employers are more likely to negotiate with workers associations, particularly as NGOs are still around to spotlight abuses.

But a number of people in Mae Sot, both foreign and local, are nostalgic for the days when one could barely make out the now all-but-vanished two-story wooden houses under their covers of thick green foliage, and when you knew just about everyone in town.

Tip Ruchaitrakul, a 59-year-old administrator for a malaria research project, fondly remembers the lush, cool forests nearby and being able to swim in and drink the water of the Moei, sadly noting its present coffee color and the widespread felling of trees. Lamenting the constant noise from construction sites, the polluting trucks and the increase in petty crime, he said: ''Every aspect of Mae Sot has changed.''