From elderly to 'superelderly': Japan wrestles with demography

From nursing care to the economy, big challenges lie ahead 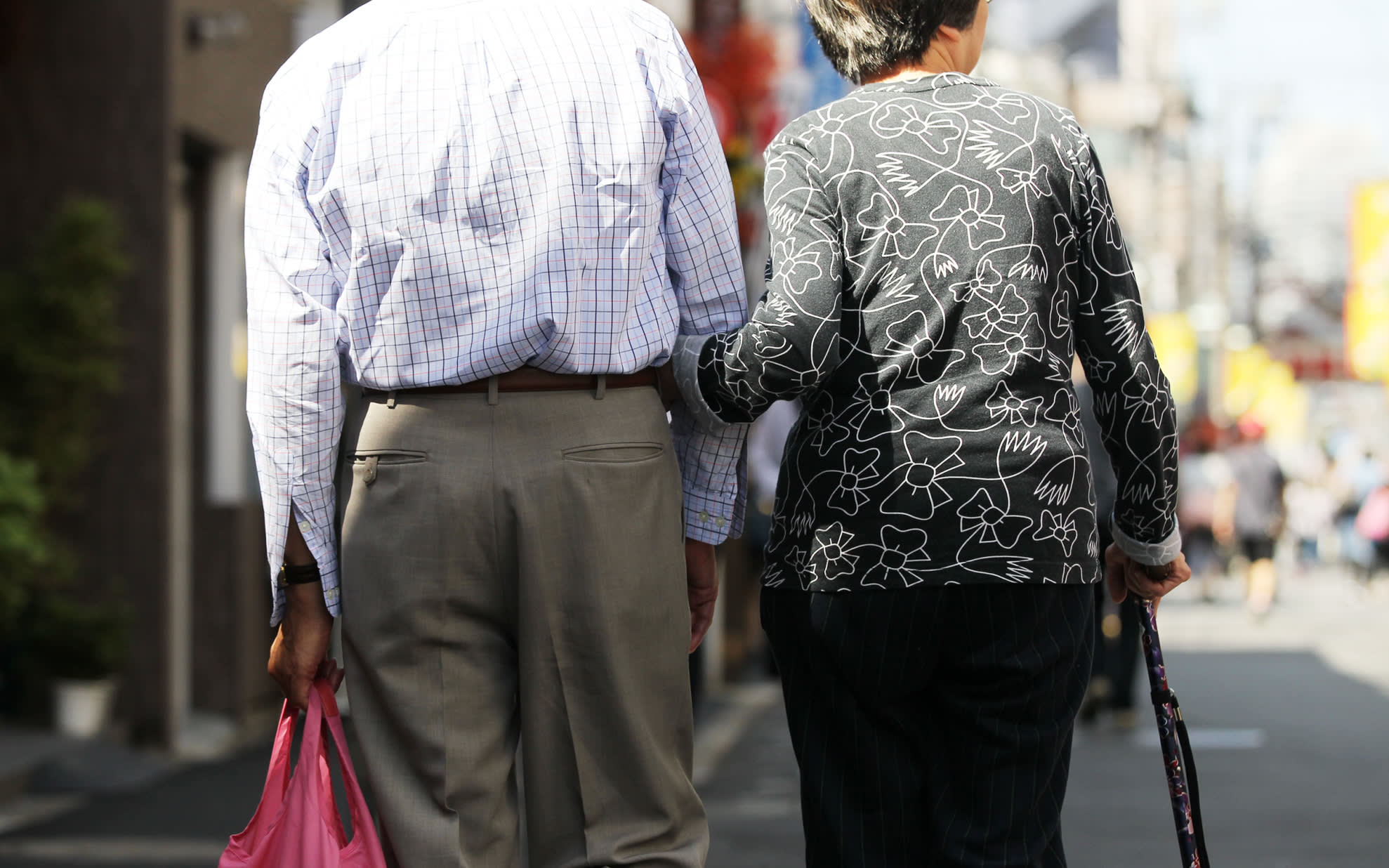 Japan's population of elderly senior citizens, those 75 and older, is rising by an average of 30,000 every month.
ERIKO FUKUYAMA, Nikkei staff writerMarch 25, 2018 19:00 JST | Japan
CopyCopied

TOKYO -- For decades demographers have warned of the challenges Japan faces in caring for its swelling elderly population. Now the country is entering a new phase, in which the "superelderly," those 75 years old and up, outnumber senior citizens aged between 65 and 74.

Many of these older elderly are frail, suffer from dementia or are bedridden. Unlike the Japan of today, in which many retirees are in good health and lead active lives, the future points to a "heavily burdened aged society" in the words of Keio University economist Keiichiro Kobayashi. The rapid graying of Japan is likely to be a permanent drag on the economy as consumption slows and more of the government's budget goes to pay for things like nursing care.

According to the Ministry of Internal Affairs and Communications, the number of Japanese aged 75 or older stood at 17.70 million as of March 1, while those between the ages of 65 and 74 numbered 17.64 million. Because people are living longer, the number of older senior citizens is growing by an average 30,000 every month. On current trends, by 2025 Japan's first wave of baby boomers will all be 75 or older, outnumbering their 65- to 74-year-old counterparts by 50%.

Japan's "aging rate," the proportion of people aged 65 or older as a share of the total, began rising rapidly in 2012, when the oldest baby boomers, born in 1947, reached their 65th birthday. The World Health Organization defines a society with an aging rate of more than 7% as "aging," one over 14% as "aged," and one over 21% as "super-aged." By this definition, Japan, with an aging rate of 27%, is already well into super-aged territory.

So far the economic effects have been mild. Advances in medicine and healthier lifestyles mean many over 65s in Japan remain active. And they have money to spend: People 60 and older account for roughly half Japan's personal consumption. 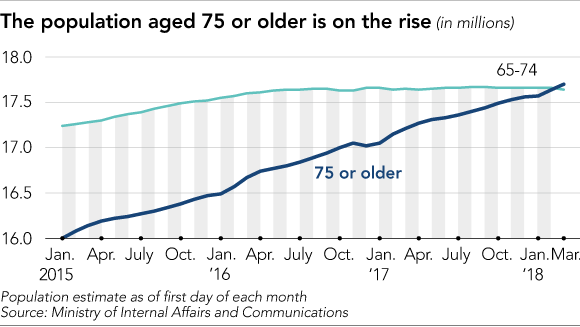 Greater Tokyo faces a particularly tough challenge. The population of older senior citizens in the capital is forecast to rise by 200,000 to 300,000 every five years. Last year, the Tokyo Metropolitan Government set up a panel to study issues relating to aging, such as seniors providing nursing care and abandoned homes.

And as Japan's elderly slow down, the economy is likely to slow with them. Hajime Takata, chief economist at Mizuho Research Institute, worries that "people with dementia, rather than the Bank of Japan or pension funds, could become the largest holders of securities."

A study funded by the Ministry of Health, Labor and Welfare shows that about 2% of people in their late 60s and about 5% of those in their early 70s suffer from dementia. But among those in their late 70s, the proportion is around 10%. Over-70s hold many securities and those with dementia will probably have their assets frozen.

Takata estimates that by 2035 up to 150 trillion yen ($1.42 trillion) of securities will be in the hands of people with dementia. "If money stops flowing, the financial side of the economy stops growing," he said.

Financial institutions are responding by creating services that make it easier for elderly clients to hand over their financial assets to family members. But many issues remain unaddressed, such as making it easier for people to assume legal guardianship over adults with dementia.

Japan's social security system also has problems. The government is considering allowing people to delay receiving pensions until after age 70, but change will take time.

"In many cases pension payments to elderly people with dementia are made to their children. [Japan] needs to consider [adjusting] benefits across the health care, nursing care and pension frameworks, such as reducing payments to those in public nursing homes. Otherwise, it will not be able to stop social security costs from ballooning," said Noriyuki Takayama of the Research Institute for Policies on Pension and Aging.

Keio University's Kobayashi said Japan will soon reach a stage where the burden of supporting the elderly will require "innovations to tackle social problems in fields such as finance, fiscal policy and working style."

The government is trying to make the best of the situation by making Japan a global leader in issues related to aging, while maintaining economic growth. But the clock is ticking -- faster.