Government to spend $436B on infrastructure Cars are held up in a traffic jam on a main street in Jakarta on Wednesday while construction of Indonesia's first subway is underway on the left.
SADACHIKA WATANABE, Nikkei staff writerJanuary 15, 2015 19:00 JST | ASEAN
CopyCopied

JAKARTA -- The Indonesian government will soon release a five-year infrastructure improvement plan worth over $400 billion aimed at stimulating economic growth. 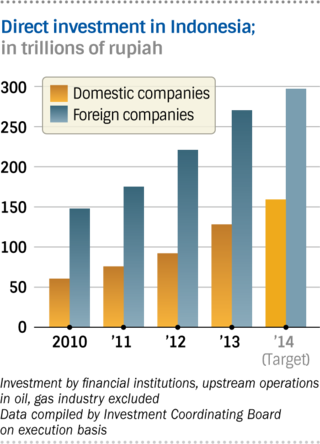 While fiscal reforms will help fund the project, Indonesian President Joko "Jokowi" Widodo is to centralize authorization procedures to encourage private sector investment and speed up administration of the projects. The government hopes to help its economy return to high growth following a recent slowdown by increasing jobs and consumption.

The National Development Planning Agency is putting the final touches on the plan so that Widodo can make it an executive order, possibly as early as Friday. The project outline will cover a broad array of works with total costs estimated to reach 5,500 trillion rupiah ($436 billion). Projects will include improving 24 ports as well as construction of roads and water treatment facilities.

The central government is expected to pay about 40% of the total cost. Indonesia's budget remained stable from 2010 to 2014, but now the Widodo administration, which assumed power last October, will prioritize national development which stagnated under the previous leadership of Susilo Bambang Yudhoyono.

The national budget for fiscal 2015 presented to the Indonesian parliament for approval last Friday features a steep reduction in fuel subsidies to 81 trillion rupiah from an initially estimated 276 trillion rupiah. It has also boosted funding for infrastructure improvement by 1.5 times to 290 trillion rupiah.

At present, a number of government offices are authorized to approve infrastructure projects. The new administration will centralize this work to fall within the Investment Coordinating Board to encourage private sector investment, expected to account for about 30% of total infrastructure improvement costs.

Widodo is trying to create a "one-stop service" system, Industry Minister Saleh Husin said, explaining why he decided to transfer all of his ministry's licensing power to the board.

The board is currently only responsible for initial approval procedures for projects and soliciting offshore investment. Under the current system, investors need to obtain approval from separate government authorities concerned with specific industrial sectors as well as those for tax and use of land.

The Energy and Mineral Resources Ministry along with 17 other ministries will transfer certain authorization rights to the board. While there are 1,250 different authorization categories, the board will take control of around 600 of them, according to government officials.

Widodo is due to officially announce the launch of the "one-stop service" program by the end of January. He also plans to standardize authorization procedures at the local government level in 2016, bringing them in line with those of the central government.

The drastic reform of investment procedures planned by the new administration are needed because the time-consuming process of starting infrastructure construction and other projects has been working against Indonesia's economic growth.

Delays have caused a shortage of electricity and transportation infrastructure. While Indonesia is faced with a power supply problem, the nation's logistics efficiency ranks 53rd in the world, below Malaysia and Thailand which rank 25th and 35th, respectively, according to the World Bank.

At a meeting with governors and other top local government officials held in a Jakarta suburb last year, Widodo asked all present to work closely with the central government, noting the successful case of China's centralized system.

The new leader has transferred the National Development Planning Agency from the supervision of the coordinating economic minister to direct presidential control.

The Indonesian economy's growth rate is at a five-year low of just over 5% and its outlook is uncertain as the rupiah plunged last December to the same level as August 1998 during the wake of the Asian currency crisis.

Following the reform of investment procedures, attention will shift to whether market environments will improve and hopes for smoother coordination between central and local governments.