HONG KONG -- Hong Kong International Airport, for many the gateway to Asia, is investing heavily to expand capacity and handle surging passenger traffic.

Having started construction of a third runway in August 2016, the airport has unveiled plans for a large commercial complex with around 200,000 sq. meters of floor space on adjacent land. Hong Kong's bid to overtake Dubai and London and become the world's leading international air traffic hub. 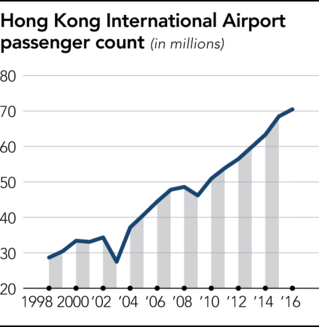 Last year, the number of passengers passing through the airport surpassed 70 million for the first time.

In announcing the figure in mid-January, Fred Lam Tin-fuk, the chief executive of Airport Authority Hong Kong, stressed the need to increase capacity. The airport needs large-scale expansion to respond to long-term demand growth, he said.

Located on Lantau Island, Hong Kong International opened in 1998, replacing the old Kai Tak Airport, which had a reputation for being the world's most difficult airport to land at.

China's economic growth in the past two decades has seen the new airport thrive. In 2016, some 70.5 million people used the airport, up 3% from the previous year.

The airport may reach its takeoff and landing capacity -- 68 slots per hour -- by the end of this year.

The 3,800-meter third runway is the centerpiece of the airport's expansion master plan. Some 650 hectares of land will be reclaimed north of the airport for its construction, along with a new passenger terminal with a total floor space of over 280,000 square meters.

The reclaimed land will be half the size of the current airport, meaning the project is more like the construction of an entirely new airport, said an official of the Airport Authority.

According to the financing plan, about 20% of the total cost of will come from facility usage charges on passengers, while the rest will be covered through loans and cash reserves.

The plan to raise passenger fees provoked strong protests from airlines. But a deal was reached after the airport agreed on varied cuts in the fees depending on seat classes and routes.

On completion in 2024, the new runway will enable the airport to handle 30 million more passengers annually.

Dubbed "SkyCity," the new commercial complex will be built on 25 hectares of land adjacent to the airport and will comprise a shopping mall, a hotel and entertainment facilities.

In the first stage of the project, more than 195,000 sq. meters will be developed for scheduled completion in 2021.

Some 300 companies were present at a meeting to explain the project held by the Airport Authority in October and the process of selecting contractors through separate bidding for each facility is already underway.

Hong Kong's Regal Hotels Group has won the contract to build the 1,000-room hotel, on which it will spend HK$2.2 billion.

In 2016, Dubai International Airport, where the United Arab Emirates' flagship airline Emirates is based, topped the list of the world's busiest airports by international passenger numbers, handling 83.6 million passengers. It was followed by London's Heathrow Airport, used by 71 million and having fallen from top spot in 2014.

Other main international airports, in Singapore and Thailand are also racing to expand capacity to meet growing demand and become stronger competitors in the global market.

The number of airline passengers in the world is expected to reach 7.2 billion in 2035, double the number in 2016, according to International Air Transport Association forecasts.

The growth will be led by China, where demand will be driven by increasing numbers of middle-income consumers and the emergence of low-cost carriers.

However, China is already home to a number of large airports, including several on Hong Kong's doorstep in Guangdong Province and Macau. Some analysts predict an oversupply in the future.