Indian economy in for trouble as consumer spending cools

Rising US interest rates an added headache for Modi, RBI

MUMBAI -- Robust consumer spending has helped the Indian economy hold up in the face of sluggish corporate spending, increasingly risk-averse investors and even a potential U.S. rate hike.

But consumers have been keeping a tight grip on their wallets since early November, when Prime Minister Narendra Modi's government announced a shock demonetization of 500- and 1,000- rupee bank notes. Now, as domestic spending falters and external pressures continue to mount, the economic outlook is rapidly darkening.

Shubhangi Ghade, who lives in Mumbai and works in the accounting department of a pharmaceutical company, has done little shopping since Nov. 8, the day the government announced its demonetization move. Ghade now buys only daily necessities, and she has had to abandon her idea of using the 50,000 rupees ($741) she had saved in cash to make a down payment on a Honda motorcycle as a present for her husband.

She instead deposited that money at a bank, exchanging some of the old notes for new ones. But she is still short on cash and has to carefully ration what little she does have.

One side effect of the demonetization has been long lines at banks as people rush to swap old notes for new. Getting away from work is not easy for most people. "It isn't good for my work status to take a leave just to withdraw cash," Ghade said. Moreover, there are limits on withdrawal amounts, meaning she could not take out a lot of money at once, even if she could get to the bank.

The sudden scrapping of high-denomination notes has had an undeniable impact on consumer spending, which has been led by middle-income earners like Ghade. Total new car sales in November, including both passenger and commercial vehicles, fell 1% on the year, the first year-on-year decline in 25 months. Motorcycle sales were hit harder, down 6% on the year, as more than half of those who buy a two-wheeler in India reportedly pay in cash.

"Retail sales volume has declined nearly 40% from a year earlier," said Keita Muramatsu, the president of Honda Motorcycle and Scooter India, a wholly owned local subsidiary of Honda Motor. In India, Honda makes about 500,000 motorcycles a month, but the company cut production by 20% in November and December.

There is no accurate data available for recent trends in the restaurant, retail and real estate businesses, but consumer spending has almost certainly weakened considerably in these sectors, too. The scrapped notes were worth a combined 14 trillion rupees, or 86% of the total value of bank notes in circulation in India. People have to deposit old notes or exchange them for valid notes at a post office or bank. An estimated 12.4 trillion rupees in old notes have been collected at banks, but only 4 trillion rupees in new notes have been issued. This means that more than 60% of the bank notes previously in circulation have disappeared. A number of banks and ATMs have run out of cash. For now, those short on cash are getting by on credit or other means.

Doing away with the old bank notes is part of the government's battle against "black money," cash held secretly -- mostly by the wealthy -- to evade taxation. The country's poor, apparently angrier about the growing income gap than about any inconvenience caused by the demonetization, have so far refrained from protesting against the government's surprise move.

Prime Minister Narendra Modi, meanwhile, seems to be hoping this dramatic attack on black money impresses voters ahead of regional elections scheduled for next year and beyond.

Whether it was wise to go ahead with the action at this particular time, however, is another question entirely, given the numerous negative factors coming to bear on the Indian economy.

One of those factors is Donald Trump's unexpected victory in the U.S. presidential election, which sent shock waves around the world the day after Modi announced his government's bank note bonfire.

Long-term U.S. interest rates are rising on expectations that Trump will deliver on his campaign promises of hefty infrastructure investment and tax cuts. These measures are also expected to stimulate the domestic economy in the short term, pushing up stock prices. Money invested in emerging economies when interest rates were low is already starting to flow rapidly back to the U.S. The Reserve Bank of India is one of the many parties watching this trend with a frown.

Given the possibility for economic upheaval, 80% of market participants had forecast that India's central bank would lower key interest rates at its Dec. 7 policy board meeting, but the rates remained unchanged.

"Globally, the imminent tightening of monetary policy in the U.S. is triggering bouts of high volatility in [the] financial markets, with the possibility of large spillovers that could have macroeconomic implications" for emerging economies, the RBI said in its post-meeting statement. The bank was caught between a rock and a hard place: Though it was surely aware that the drop in consumer spending poses a serious problem, it was unable to lower key interest rates due to fears of accelerating capital outflows from the country.

Investment data for November validates such concerns. According to the Institute of International Finance, $24.2 billion of nonresidential funds flowed out of emerging economies in November. "There have only been four months with bigger outflows since 2005: Three occurred in the heart of the global financial crisis and one immediately following the 2013 'taper tantrum,'" the IIF said. "Taper tantrum" refers to the outflow of investment money from emerging economies triggered when the U.S. Federal Reserve indicated in May 2013 that it would begin scaling back its quantitative easing program. 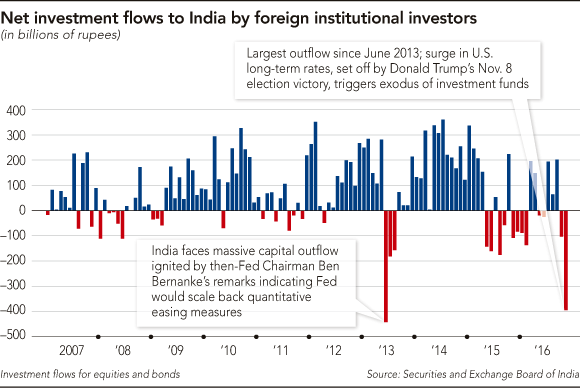 India is no exception to the recent investment trend. In November, foreign institutional investors net sold 393.9 billion rupees in stocks and bonds, the largest amount since the taper tantrum, which led to a sharp depreciation of the rupee. On Nov. 24, the currency hit an all-time low, prompting an immediate market intervention by the RBI.

India was included in the "fragile five," a grouping of emerging economies considered particularly vulnerable when the value of their currencies plummeted in the summer of 2013. But India has since reduced its current-account deficit and built up foreign currency reserves so that they are now equivalent to about 10 months of monthly imports, strengthening its ability to pay external debt, which had been a major concern.

But while India is more resilient to an outflow of funds than it was before, concerns remain. "We have to admit that globally it is a different world now than in October," said Anubhuti Sahay, an economist at Standard Chartered Bank. "There are lot more uncertainties around global growth."

Another concern for the Indian economy is crude oil prices. Cheap crude over the past several years has contributed much to the country's economic stability, including decreasing the current-account deficit and helping curb inflation.

But oil prices are starting to rise gradually. On Dec. 10, OPEC and non-OPEC members, including Russia, agreed to cut their production to boost oil prices. If their efforts bear fruit, India could be in trouble, given that it imports 80% of the crude oil it uses. After hovering around $40-49 per barrel for a long time, prices have risen to the $50 level. Market observers predict serious pain for India if oil prices reach $60 or more. At the Dec. 7 policy board meeting, the RBI lowered its growth forecast of gross value added from 7.6% to 7.1% for the year ending March 2017. The revision apparently factors in the slowdown in consumer spending, which accounts for 60% of India's gross domestic product, but many market observers think the impact will be greater. "[The forecast] is optimistic on the near-term growth impact," said an official at Nomura.

Unfortunately for India, this may be just the beginning of its economic woes.

"It's not just consumption demand. Investment has also suffered, because the entire banking sector is busy meeting the needs of people for cash," said Sunil Kumar Sinha, an economist at credit ratings agency India Ratings and Research. "As a result, other banking operations have come to standstill."

A further delay in the recovery of investment would deal a heavy blow to the Indian economy. Banks have been redoubling their efforts to finish writing off bad loans by the end of March in hopes of kick-starting corporate investment in the medium term. The government's demonetization move may push back those plans.

"Investment will be a bigger casualty than consumption because as circulation picks up, maybe demand returns shortly. But if investment gets postponed, that will have a more serious long-term impact on the economy and growth," Sinha said.

As the headwinds continue to blow harder, Modi and the RBI will have a tough time steering the Indian economy through a near-perfect storm.