JAKARTA -- A call in Indonesia's parliament for a blanket ban on alcohol sales in the country has alarmed some of the world's biggest beverage companies and highlighted growing conservatism among some Islamic lawmakers. The latest push against alcohol consumption follows a recent ban on beer sales in convenience stores and has seen calls by politicians for more alcohol restrictions.

A new law came into effect on April 16 barring Indonesia's 55,000 convenience stores, minimarts and small retailers from selling drinks containing alcohol. The move extends an earlier ban on drinks containing more than 5% alcohol to include all alcoholic beverages, such as low-alcohol beer and shandy, although sales are still allowed in supermarkets and restaurants.

Indonesia's 560 parliamentarians will soon debate a wider ban that could see drinkers jailed for up to two years and wipe out the growing alcoholic drinks market in the world's fourth most populous country of 250 million people.

Indonesia has ambitions to boost the number of international visitors from between 9 million and 10 million to 20 million or more a year as achieved by Thailand and Malaysia. But a wider alcohol ban is certain to reduce the country's attractiveness to holidaymakers.

The effect on the tourism industry would be "quite substantial" according to the Indonesian Brewers Association, which said the proposed prohibition would also cause 190,000 job losses and "give a negative message to the international market."

Brewers say that the ban on convenience store beer purchases could have a serious impact on overall national sales volumes, which rose by 11% last year, according to research by Euromonitor International, a U.K. market research company. The total size of the beer market in Indonesia is approximately 250 million liters, according to IWSR, a U.S. company that researches worldwide alcohol sales. 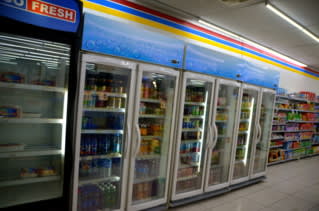 One of the Jakarta convenience stores where beer sales are now banned under a recent law. Photo by Simon Roughneen

"The ban extends ... to all retail [outlets] except supermarkets and hypermarkets, so could affect up to 50% of sales outlets," said Mark Cavanagh, a senior official at Heineken Asia Pacific. Heineken, based in Amsterdam, accounts for about 70% of beer sales in Indonesia through its local subsidiary, Multi Bintang, which also brews Guinness sold in Indonesia, under licence from Diageo, a U.K. drinks company.

Heineken said it had helped to train about 15,000 retail staff across Indonesia to sell alcohol only to those above the minimum legal age, and claimed that the convenience store restrictions would lead to an increase in the consumption of illicit alcohol, which can be dangerous.

Regrettably this ban will lead to greater problems of bootleg liquor with detrimental effects for the country," Cavanagh told the Nikkei Asian Review.

Two tourists -- one British and one Australian -- died in Indonesia in 2013 after drinking home-brewed liquor, while 10 Indonesians died and dozens were hospitalized in December 2014 after drinking a mix of water, energy drinks and methanol. Another 14 people died from drinking a similar potion earlier in the year in Surabaya, Indonesia's second biggest city.

Diageo, which also sells well-known brands of spirits such as Baileys, Johnnie Walker whisky and Smirnoff vodka, had called for the beer restrictions to be postponed for a year. The delay would have helped "achieve the government's objectives such as tackling underage drinking while ensuring the viability of local jobs, tourism, and mitigating further risk to illicit alcohol," John Galvin, Diageo's Indonesia general manager, told the NAR.

Young Indonesians often meet outside Indonesia's convenience stores, some of which provide free Wi-Fi. Before the ban young people could sometimes be seen, beer in hand, outside the stores. Sitting outside an Indomaret store in central Jakarta, a table of teenagers and young adults typing on laptops downed soft drinks and coffee. "I don't drink alcohol," said one, giving his name as Dewa, "so this ban is no big deal to me."

With restrictions on small retailers now in place, a wider ban is now being pushed by two of the four Islamic parties represented in Indonesia's parliament, the United Development Party (known by its Indonesian initials as the PPP) and the Prosperous Justice Party (PKS).

The proposed law seeks to ban the production, distribution, sale and consumption of beverages containing more than 1% alcohol. Offenders found distributing or producing alcohol could face between two and 10 years in prison, or a fine of up to 1 billion rupiah ($77,205). Anyone caught drinking alcohol could face a prison term of between three months and two years.

The PPP says the restrictions are needed to curb alcohol abuse by young people. However, per capita alcohol consumption in Indonesia is only one-sixth of the regional average, according to the World Health Organization. Heineken and Diageo concede that underage drinking is rising in Indonesia, but a survey by Nielsen, a market research company, suggested that only 2.2% of Indonesians over 20 had consumed alcohol in 2013.

The attempt to impose a total ban on alcohol could be an attempt by some of Indonesia's Islamic parties to raise their profile and influence. The country's five Islamic parties won a combined 31.86% of the votes in Indonesia's 2014 parliamentary election, up from 25.9% in the 2009 election, but below a 35% high reached in 2004.

"This is the type of issue that these parties promote to try raise their profile with the public," said Bonar Tigor Naisposos, vice-chair of the Setara Institute, a Jakarta-based political research organization.

Typically, however, these parties have worked closely with Indonesia's bigger, non-religious parties, and have not promoted policies that could be described as "hard line." Moreover, Indonesia's Islamic parties have typically failed to agree on a common agenda, and often disagree as they compete for votes. Last year, one Islamic party, the National Awakening Party (PKB) supported Joko Widodo, the eventual winner of the 2014 presidential election, while the PPP, PKS and National Mandate Party (PAN) backed Prabowo Subianto, the losing candidate.

Since the election the PPP has been riven by a leadership tussle, in which erstwhile party leader Surydharma Ali, a former religious affairs minister, has been charged with misuse of pilgrimage funds by Indonesia's Corruption Eradication Commission (KPK). He subsequently lost control of the party to a faction that prefers to align with Widodo.

The PKS, the other party pushing for an alcohol ban, has also seen its share of scandal, and is sometimes mocked as the "Partai Kotor Sekali," or "Very Dirty Party." Former chairman Luthfi Hasan Ishaaq was convicted of money laundering in 2013.

"This is a way for the parties to try improve their image by appealing to an issue which is sensitive for many Muslims," said Djayadi Hanan, executive director of Saiful Mujani Research and Consulting, a polling organization.

Indonesia has a secular constitution and is usually seen as practicing a relatively liberal brand of Islam, although Aceh, the westernmost province has implemented a form of Islamic law.

The beer restrictions and the looming vote on a wider alcohol ban come as Lukman Hakin Saifuddin, a PPP member and Widodo's Religious Affairs Minister, prepares a draft law on religious harmony, which will be made public in the coming weeks. About 208 million Indonesians are Muslims, the largest Muslim population in any single country. Most of the remainder are Buddhists, Christians or Hindus.

Last year an Islamist group called the Islamic Defenders Front (FPI) protested against Basuki Tjahaja Purnama, governor of Jakarta, on the grounds that he is of Chinese descent and is Christian. In 2014, the FPI joined Subianto's campaign in alleging that Widodo, a Javanese Muslim, was a Christian of Chinese origin. In what some local observers see as a new sign of Islamist militancy, several hundred Indonesians are estimated to have traveled to the Middle East to fight with the extremist group Islamic State.

"This type of debate, about whether Indonesia could become more strictly Islamic, comes up all the time," said Hanan. "But I don't think these restrictions will be part of anything like that, and I think that whatever comes out of the parliament discussions, it will be less strict than what the PPP and PKS wants. Nobody will go to jail for drinking alcohol," Hanan predicted.

Sofyan Djalil, Indonesia's coordinating minister for economic affairs told a World Economic Forum meeting in Jakarta on April 20 that the government does not support widespread prohibition.

But the ban on beer sales at convenience stores has already stoked anger in Bali, a Hindu majority resort island, where legions of backpackers wander the streets nursing bottles of store-bought Bintang lager.

Trade Minister Rachmat Gobel was harangued by irate shop-owners while on a recent walkabout in Bali, and the government has since said it will propose exemptions to cover Bali and other tourist destinations. Bali tourism office head A.A. Gede Yuniartha Putra told Bloomberg in March that "we want to be exempted from this, otherwise we won't obey it."