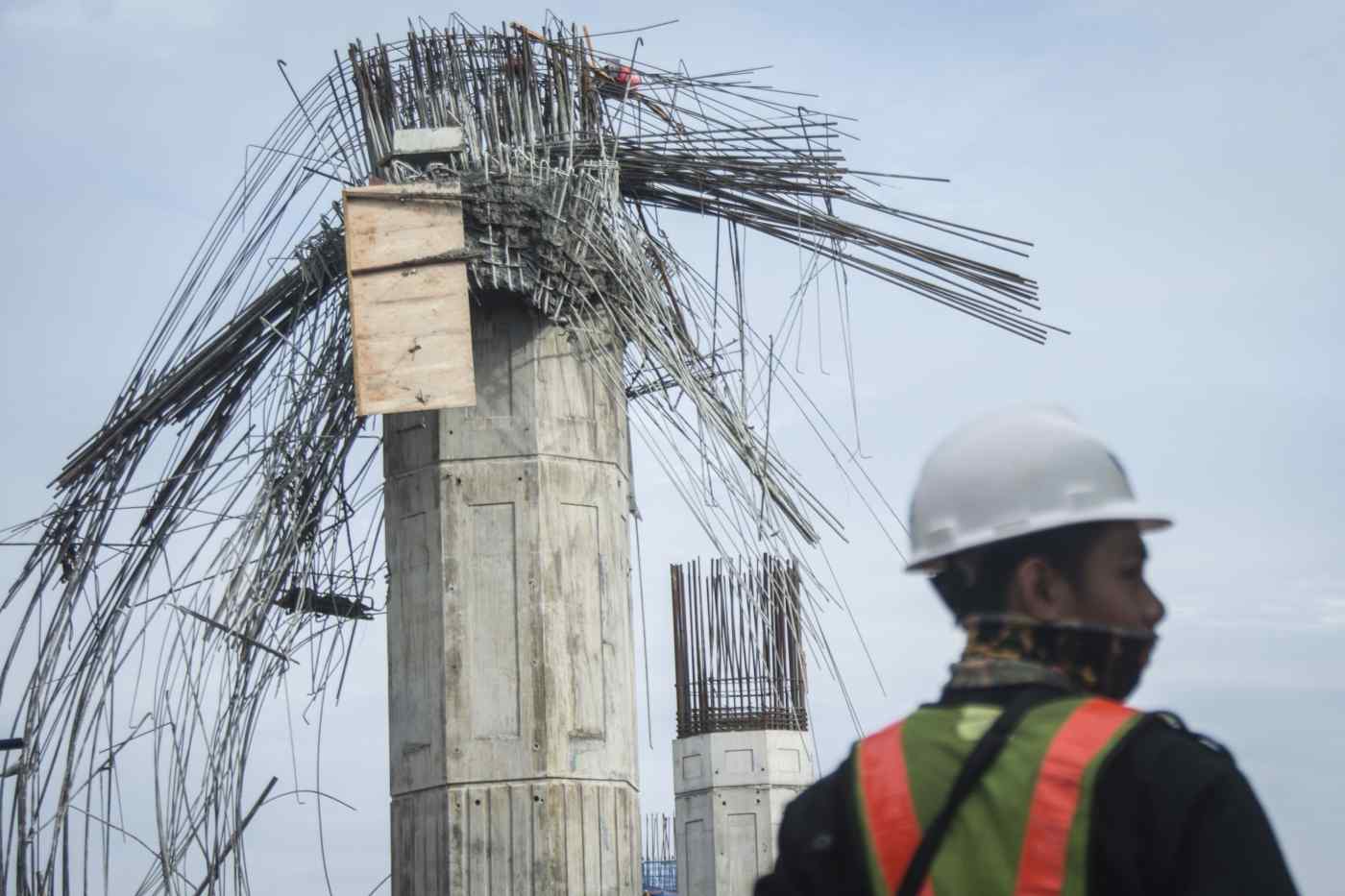 JAKARTA -- The Indonesian government on Tuesday said it will temporarily halt the construction of elevated toll roads and railway tracks while probing a string of recent construction accidents.

The announcement represents a major setback for President Joko Widodo, who launched an aggressive infrastructure drive in October 2014.

The decision follows an accident early Tuesday morning at a toll road construction site in East Jakarta, where the formwork of a pier head fell and injured seven people. It was the latest in more than a dozen of accidents at infrastructure construction sites handled by state-owned builders over the past six months. In all, nine people have been killed and many others injured, raising concerns over the quality of construction.

"We temporarily halt heavy construction work above the ground -- [for] flyovers, long bridges, LRT ... and MRT," Public Works Minister Basuki Hadimuljono said, referring to the ongoing light rail transit and mass rapid transit networks in Jakarta and Palembang, South Sumatra Province. He said that over the next few weeks, a newly established committee under the Public Works Ministry, as well as state builders and independent consultants, will investigate the causes and evaluate construction activities for infrastructure projects in general.

The MRT is backed by the Japanese government. It was set to start operating in March 2019 -- a month before the next presidential election. A spokesperson for MRT Jakarta said it has not received an official notice from the government regarding the halt.

"I told the public works minister to tighten supervision ... because it is not happening in just one place, but in so many other places," Widodo told reporters earlier on Tuesday. "Regular and tight supervision is necessary. We hope it will address negligence and other components in construction."

A reprimand has been issued for Waskita Karya, the state-owned contractor for nearly half of the accident-hit projects, including the latest one on Tuesday. Hadimuljono said his office has recommended a heavier sanction for Waskita, but the final decision will be made by the Ministry of State-Owned Enterprises. Waskita's shares fell 1.9% on Tuesday, before Hadimuljono and other ministers officially announced the move at the presidential palace. The stock rose 7.2% on Monday. Shares of Jasa Marga, the dominant state-owned toll road operator, fell 2.2%.

The moratorium is a rare step back for Widodo, who launched his ambitious infrastructure program after winning the 2014 presidential election. Widodo has promised to build some $350 billion worth of roads, railways, airports and other structures that help people get around. The president has been counting on these projects to improve economic equality across the archipelago and make businesses more competitive.

His aggressive approach, which caused funding schemes in some projects to be renegotiated while construction was already underway, has stirred debate over whether the projects were well planned and designed. Nevertheless, there has been notable progress on toll roads, in which state-owned contractors took over many stalled projects previously awarded to private companies.

A prolonged delay in the projects may pressure these companies' finances. Waskita and Jasa Marga have seen a surge in debt levels after raising funds from banks as well as capital markets. A delay could also undermine Widodo's credibility ahead of the April 2019 presidential election.

Widodo, who is widely expected to run for a second term, told the Nikkei Asian Review in December that he will continue to "fix" Indonesia regardless of rising political heat.