Is Cambodia a 'Japanese beef-laundering' hub? A ban on the import of Japanese beef in China may have created unofficial routes for the product into the country.   © Reuters
ATSUSHI TOMIYAMA, Nikkei staff writerFebruary 18, 2018 16:30 JST | Japan
CopyCopied

PHNOM PENH -- Cambodia's imports of beef from Japan, widely known as "wagyu," have shot up, yet you will struggle to find it on a menu in even the most exclusive restaurants in Phnom Penh.

Many now believe the country has become a staging post on a "beef laundering" route set up to satisfy the palates of affluent Chinese.

"Japanese beef? No way!" said Heang Channy, a butcher at a traditional market in the Cambodian capital. "That can't be true," she laughed on hearing that her country is now the world's largest importer of frozen Japanese beef.

Japanese Finance Ministry statistics show that exports of frozen beef to Cambodia in 2017 surged 50% on the year to 544 tons, making the Southeast Asian country the top importer for seven straight years. But there is little sign of growing, or indeed any, wagyu consumption.

A handful of high-end Japanese restaurants and Western steakhouses serve it, but at $40-50 for a 100 gram portion, nearly 40 times the price of local beef, it is hard to see the delicacy being a staple in most Cambodian households.

According to Ly Lavil, chairman of the Cambodia Livestock Raisers Association, average annual beef consumption per person is 3kg, and he was surprised to learn about the volume being imported from Japan.

So where does it all go after passing through Cambodian customs?

Some 7.35 million Chinese visited Japan in 2017, up 15% year-on-year, and like all tourists, they like to indulge in a bit of local fare while on vacation. Marbled wagyu has become highly sought after all over the world, a phenomenon fueled by stories of cattle being fed beer and massaged to produce tender cuts.

But in China, where top-quality meat can fetch several hundred dollars per kilogram, importing Japanese beef has been banned since 2001, after an outbreak of bovine spongiform encephalopathy, or BSE. 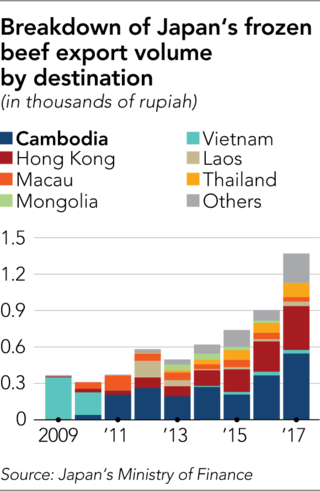 That does not stop restaurants serving it if asked, according to a Japanese businessperson who used to live in China, meaning unofficial routes must have been set up to bring it in to the country.

In January, Chinese news website fjsen.com reported that customs officials had seized 178.5kg of black wagyu that were being smuggled from Japan through an airport in Fuzhou, Fujian Province. On average, between 30kg and 40kg of the frozen meat have been seized at the airport every year since 2015.

Packs that are small enough to hide in a suitcase, though, will only feed so many. To bring in large volumes, it is easier to falsify the country of origin by moving it through a third country.

Cambodia has close political and economic ties with both Japan and China, and is "almost certainly" where the beef passes through, said an official of a Japanese meat trading company.

The Chinese Communist Party's official newspaper, the People's Daily, reported that in June 2015, a group of smugglers was caught by Shanghai authorities and officials had seized 13 tons of beef.

The group had exported beef from Japan to Cambodia, before replacing the labels and transporting it to a freezer warehouse in Chiang Rai in northern Thailand. The meat was then packed together with jackfruit and mangosteen, labeled "fruit" and shipped to China's Yunnan Province. From Kunming Airport, the cargo, now labeled "ham," was delivered to major cities like Shanghai, Guangdong and Hangzhou.

Up until 2010, the top export destination for Japanese beef was Vietnam. But after Hanoi also suspended beef imports in the Spring of 2010 in response to the BSE outbreak, Cambodia shot up the rankings, despite having previously imported negligible amounts of frozen beef.

Laos followed suit and Mongolia's imports also surged in 2013. All three countries provide easy access to and have business links with China. Vietnam resumed imports in 2014, but with a supply route seemingly well established, Cambodia's imports continue to grow.

The administration of Cambodian Prime Minister Hun Sen relies heavily on China for economic growth and has accepted investment and loans from Chinese state-run banks and enterprises to implement real estate, infrastructure and casino projects.

In return, Hun Sen has kept his counsel when Beijing has riled other governments in the region.

The Cambodia National Rescue Party, the country's largest opposition group, was dissolved in November, clearing the path for Hun Sen as he prepares for general elections later this year. With China's backing, the prime minister appears to be intent on reinforcing his rule.

The Chinese government may nominally be trying to crack down on Japanese beef smuggling, but eliminating it completely will not be easy as customers are said to include senior government officials and high-profile businesspeople.

The illicit trade in prime beef that few Cambodians know about may also be a sign of weakening rule of law under an increasingly autocratic regime.