Wages may rise in the short term, but the economy could sustain long-term damage TOKYO -- Corporate Japan is in the grips of a labor shortage so serious that it threatens to derail the country's push to escape 20 years of stagnation.

The March tankan survey of corporate sentiment, released on Monday by the Bank of Japan, revealed a striking fact: Businesses are running out of people to hire.

This owes partly to a shrinking working-age population, which peaked at 86.99 million in 1997 and had fallen to 76.2 million in February. That works out to an average loss of roughly 500,000 workers a year over two decades -- the fastest drop among developed countries.

Companies have taken various measures to address the labor squeeze.

In the restaurant industry, one of the hardest-hit players, chain operator Royal Host -- a Royal Holdings group company -- ended round-the-clock service in February, while Skylark, another chain operator, plans to make 2 a.m. closing time at 70% of its 24-hour eateries. Fast-food operator Yoshinoya Holdings will offer scholarships to college students working part time at any of its beef bowl restaurants, in a bid to entice more part-timers.

The labor drain has been severely disruptive in the logistics industry, which is scrambling to cope with the surge in business created by the rise of e-commerce. This has forced couriers such as Yamato Holdings subsidiary Yamato Transport to rework its services and rates, a rare move for a company that has expanded by continuously making efforts to accommodate its clients' needs. 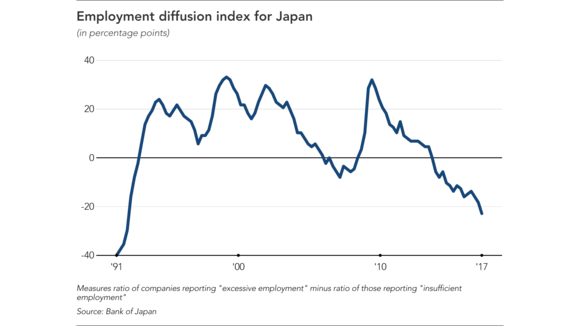 Tokyo Disney Resort may be known among its Japanese fans as the "land of dreams," but the reality is becoming closer to a nightmare for operator Oriental Land, which is struggling to secure workers for the theme park. In March, it announced plans to turn its 20,000 non-full-time employees into union members, which will raise their wages and improve labor conditions.

For the BOJ, the labor shortage is a boon -- at least in the short term. Tighter labor markets typically push wages higher, which in turn increases private consumption, something the central bank sees as vital to achieving its target of 2% inflation. But economists warn that if the shortage is not dealt with properly, it could weigh heavily not only on corporate earnings, but the economy as a whole.

"If companies cannot raise the price of their products or services to cover the increase in labor costs, it may shrink their overall earnings, placing a drag on the economy," said Mari Iwashita, chief market economist at SMBC Friend Securities.

Some ways that companies are coping, Iwashita said, are through factory automation or the use of such advanced technologies as artificial intelligence.

The latest tankan survey showed that companies expect to boost investment in software by 3.1% on the year. But Iwashita pointed out that "in labor-intensive industries like construction, distribution, retail and medical, AI cannot completely replace humans" because tasks in the service-related sector are more complex.