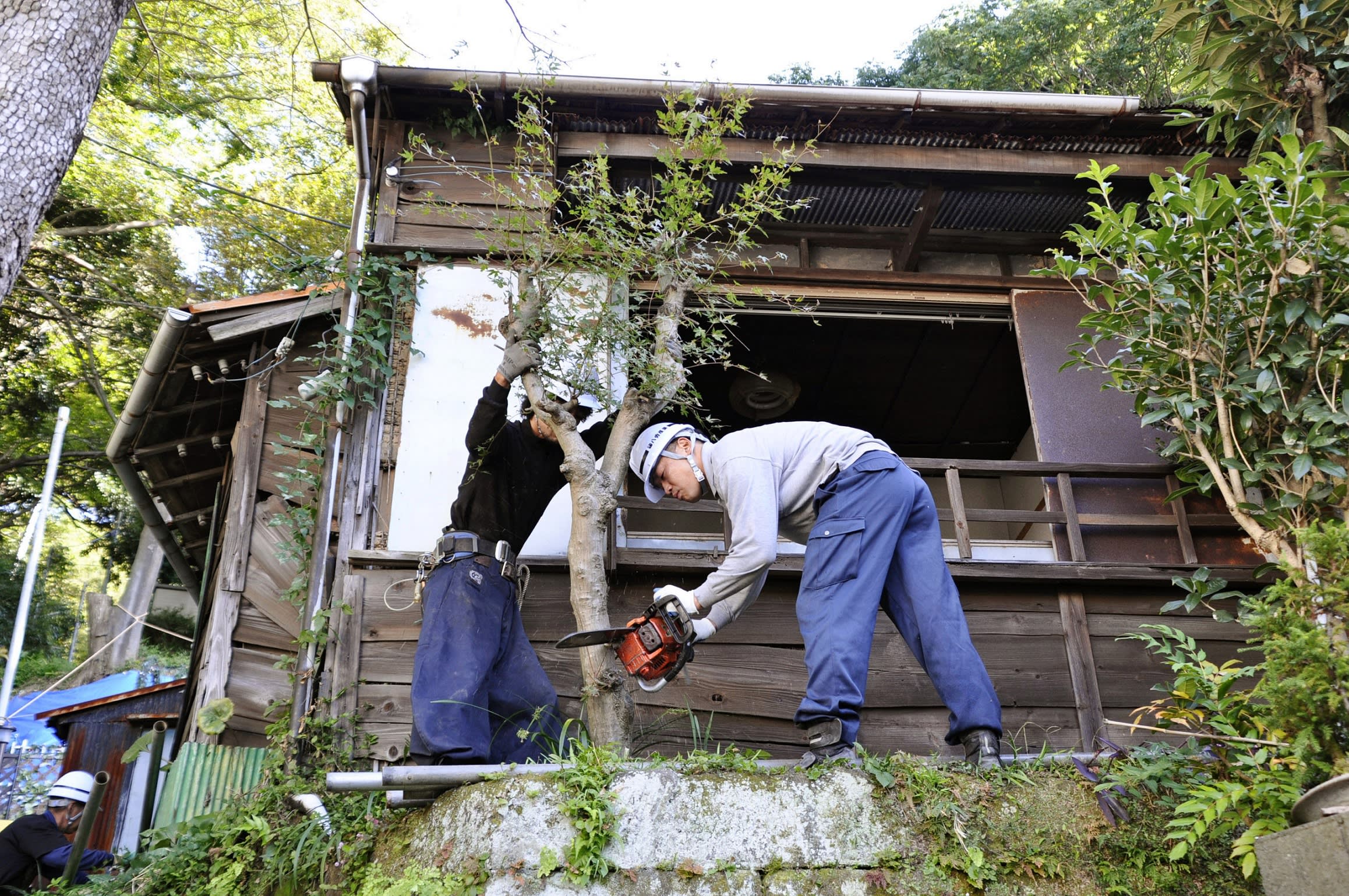 TOKYO -- Around 11% of Japan's land is "unclaimed" -- plots that cannot be traced back to their owners. The figure is expected to jump to 19% by 2040, according to an expert study group. 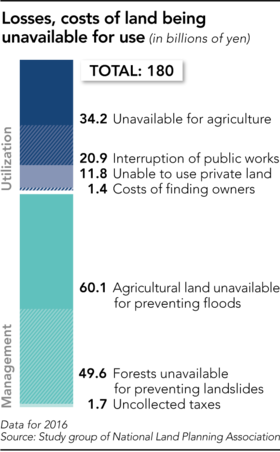 As the younger generation moves from rural areas to cities, the hometown family plot is often left unattended when the parents die. Many forget to re-register the land in the next generation's name. Some avoid registering to avoid taxes. This mass neglect of land is yet another side of the shrinking population, along with businesses unable to find successors and piles of cash left at garbage collection points as elderly people die alone with nobody to pass the money to.

Accumulated economic losses due to unclaimed land will reach 6 trillion yen ($52.5 billion) by 2040, according to the private-sector study group. Chaired by former Internal Affairs Minister Hiroya Masuda, the group predicts that the amount of unclaimed land will only grow as Japan enters an era of higher death rates. 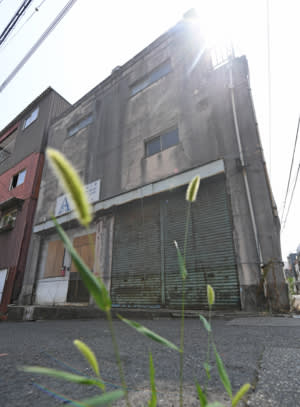 This building in Kobe, west Japan, has a sign saying that it is a security company but there are no sign of activity and the owner cannot be located. (Photo by Naoki Morikawa)

The estimate is based on a survey conducted by the study group of people expected to inherit land from their parents in the coming years.

Some 27-29% of land expected to be inherited between the years of 2020 and 2040 could go unregistered, the survey results showed.

The presence of unclaimed land could hinder development projects. Many smaller municipalities with dwindling populations are taking steps to improve administrative efficiency by concentrating residents in urban areas. However, as such land use requires the consent of all land owners, unclaimed land often stands in the way. 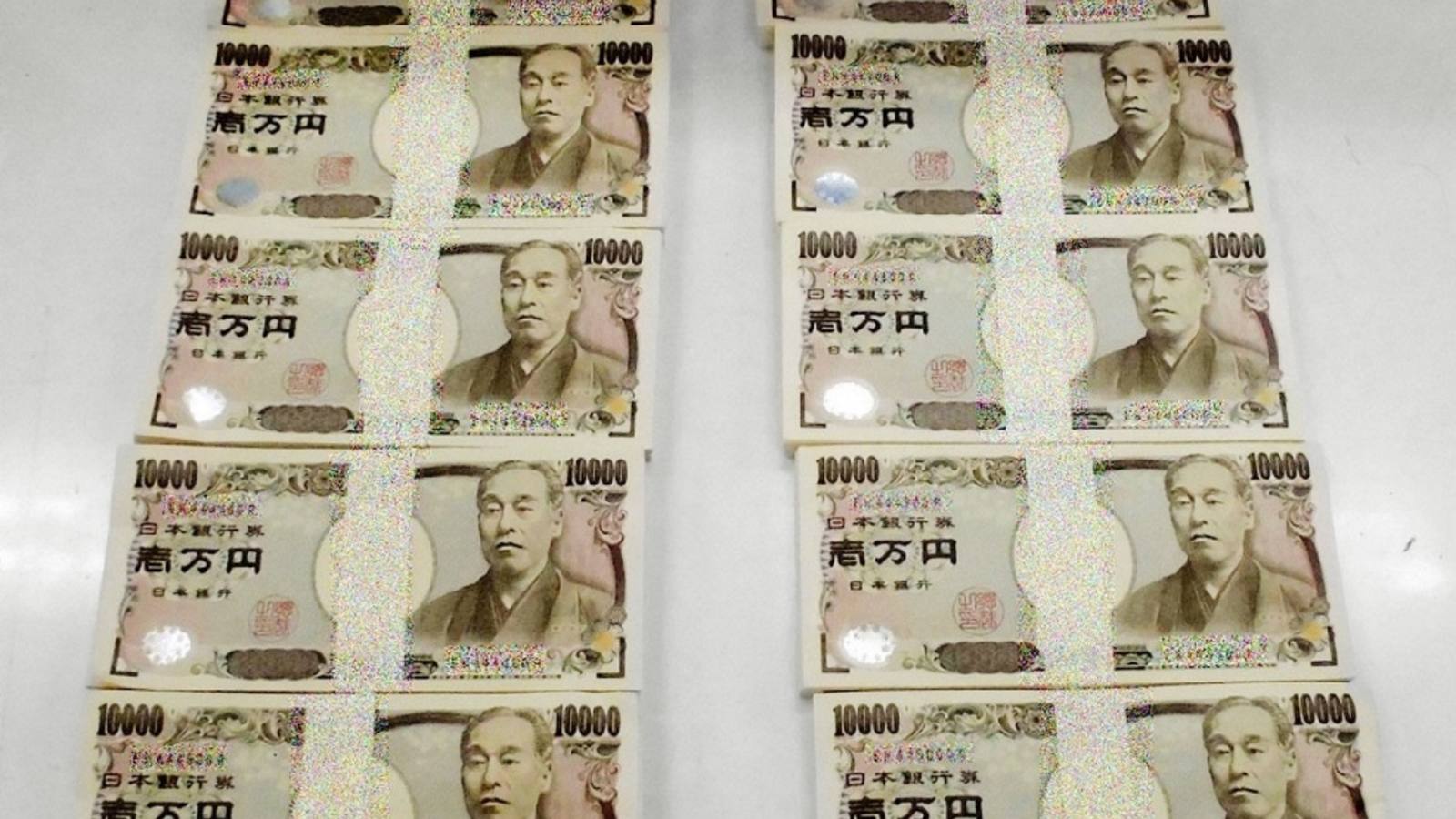 Cash in trash turning up all around Japan

Unclaimed land in Japan equivalent to size of Taiwan

In one example, it took nearly three years to acquire land to build a new national road in Ibaraki Prefecture, north of Tokyo. The plot -- which was first registered by a woman born in the Meiji era (1868-1912) -- had at least 148 legal heirs as ownership passed down through successive generations, including some who died after moving overseas.

The developers managed to acquire consent from around 130 of the successors, but could not reach the rest. In the end, the government used a special measure for expropriation to acquire the unclaimed land.

The study group estimates that delays in redevelopment and consolidation of farmland due to unclaimed land led to the loss of some 68 billion yen last year. Total losses are expected to swell to 2.2 trillion yen by 2040. Total costs of water damage caused by devastation of forests and agricultural land without ownership are estimated at 3.6 trillion yen.

One solution could be for the government to relax rules on sharing information among ministries. For instance, the information recorded in property tax ledgers is not allowed to be used for any purpose other than taxation. The information could help in locating the rightful owners of the property, but it would take an amendment to the law to enable that to happen.

The Ministry of Land, Infrastructure, Transport and Tourism plans to create a system that would allow for public use of unclaimed land, turning them into parks and playgrounds, without having to change the ownership.