TOKYO -- Brisk construction demand is pushing up construction costs in Japan amid a continuing labor shortage for the industry and rising materials prices. The higher construction costs could affect private housing investments and companies' willingness to open stores, weighing on economic growth. 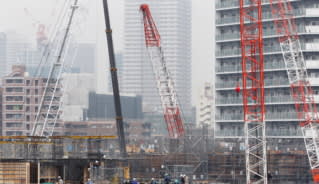 The construction cost per square meter of floor space in May was up 9% compared to a year earlier, at 187,000 yen ($1,820). It is the 16th consecutive month of year-on-year increases for the industry, and the highest since January 1993, immediately after the bubble burst.

By region, costs were up 11% in the Tokyo region, 13% in the western Kinki region and 2% in the central Chubu region.

Reconstruction after Japan's March 2011 earthquake and tsunami, measures to combat aging infrastructure and facility development for Tokyo's hosting of the 2020 Olympic Games sharply increased construction demand in the past couple of years. 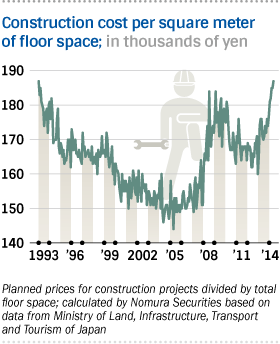 That resulted in a record shortage of skilled workers and is driving up labor costs. The Ministry of Land, Infrastructure, Transport and Tourism in February raised the labor unit price, used by the government and local municipalities to estimate the price of public works projects, by more than 7% nationally.

Expanding construction demand is also increasing building materials costs. Iron frames used for building trade at more than 80,000 yen per ton, up 14% on the year. Steel reinforcing bars used in condominium construction stand at about 67,000 yen, up 9%.

Heavy cost burden has made many companies reluctant to invest in construction. According to a survey on condo market trends released Tuesday by the Real Estate Economic Institute, the condo supply in Tokyo decreased by 20% on the year to 19,394 units in the January to June period. Rising construction costs as well as a consumption tax hike in April were in part behind the decline. The average price of a condo was up nearly 6% at 50.1 million yen.

Higher construction costs are also affecting companies' plans to open stores. Japanese retail giant Aeon initially planned to open 10 large shopping malls in the fiscal year through February 2015. But it reduced the number to seven, a year-on-year increase of 40%.

The Tokyo Metropolitan Government in November last year called for bids for the construction of major facilities of the new fish market in Toyosu, Koto Ward, for the relocation of the famous Tsukiji location. But companies failed to show up. The metropolitan government was able to conclude the bid in February by raising planned construction prices by as much as 60%.

The first bids for the demolition work of the national stadium in Tokyo's Shinjuku Ward, which will be soon reconstructed, also failed. The second bids open Thursday.