Production shifts to Southeast Asia as wages rise in China The price of imported clothing fell by 1.7%, the sharpest drop since a 2.1% decline in 2002, Bank of Japan statistics show. Toys sank by 7.5%, the largest decline since records began in 1991, and sporting goods shed 2.2%, underscoring a broad decline in import prices for general merchandise. All figures are on a contract currency basis, such as dollars, to eliminate-foreign exchange effects.

The downward trend began in 2016 -- when prices for apparel and sports products fell for the first time in 13 years and six years, respectively -- and accelerated in 2017. Prices for plastic products used in kitchens and bathrooms have continued to decrease since their peak in 2013.

The average price of all imported goods, meanwhile, climbed 10%. Food products have increased across the board, while oil and natural gas -- a particularly large share of imports -- are soaring. Although apparel accounts for just a small portion of all Japanese imports at about 4%, lower prices for nondurable imports such as clothing and daily goods have stood out as other goods rise.

Garment manufacturing and light industries are generally labor-intensive, with wages accounting for a large portion of the production costs. Monthly salaries for factory hands in China's major cities gained 20% to 30% in the last five years, and Japanese import prices have grown as companies pass on such rising costs. 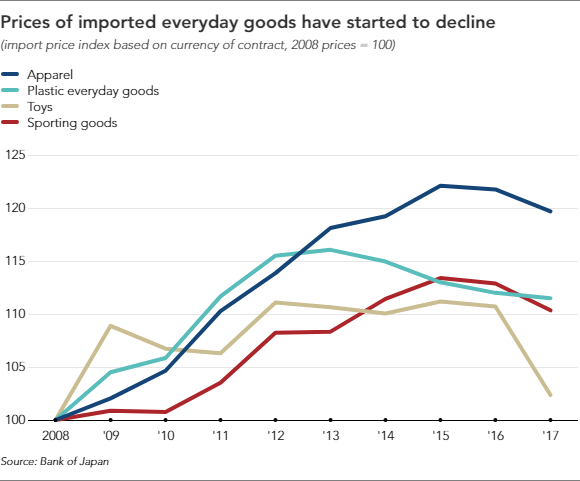 The monthly pay for a general factory worker in Beijing, Shanghai or Guangzhou is around $450 to $650, according to the Japan External Trade Organization. Southeast Asian countries are considerably cheaper, with monthly wages of $338 in Bangkok, $320 in Jakarta and $191 in Hanoi.

Japanese clothing makers have moved toward a "China Plus One" strategy -- where manufacturing is shared between China and another country -- to control costs. Menswear manufacturer Aoyama Trading opened its first directly run factory outside of China in Indonesia in 2015, and currently produces more goods there than in China. Women's apparel retailer Honeys made 90% of its clothes in China at one point, but shifted production to a directly run plant in Myanmar. China now represents about 30% of output.

What happens when Asia's low labor cost model is disrupted?

China's share of Japanese apparel imports has declined to 62% in 2017 from 80% 10 years earlier, Ministry of Finance trade data shows. Meanwhile, the Association of Southeast Asian Nations' portion has jumped to 25% from 6% over the same time period.

"Even in plastic products, automation in Chinese production is accelerating and may keep down prices as a result," said the Japan Plastics Industry Federation. Import prices could decrease further, should investment for labor-saving technology advance in China.

Investment by Japanese companies in ASEAN's four major members -- Indonesia, Malaysia, the Philippines and Thailand -- has outpaced that toward China since 2013, according to JETRO.

Import prices of semi-durable goods like plastic products dropped 5% last year. If companies pass those savings on to consumers, that could save Japanese households about 13,000 yen ($122) per year, calculates the Daiwa Institute of Research.

In contrast to the early 2000s, when Japanese companies shifted production to China for cheap labor, the current trend "will greatly help lower import prices without hollowing out domestic industry," according to Satoshi Osanai, senior economist at the institute.