Figure is at a 24-year low and could lead to higher wages, consumer sentiment 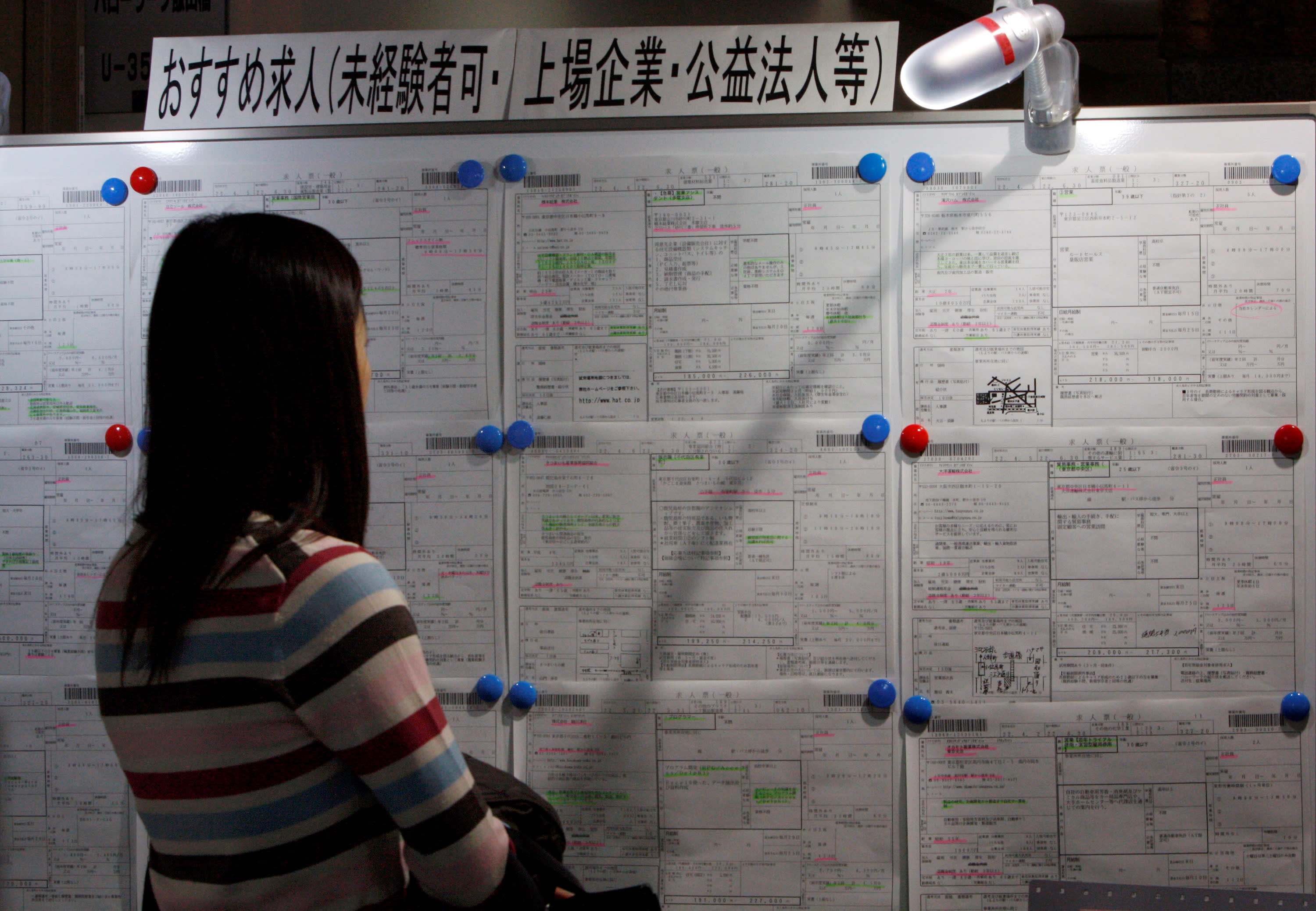 TOKYO -- A tighter job market may be setting the stage for Japan to finally climb out of its two decades of deflation.

The seasonally adjusted unemployment rate released Tuesday by the Ministry of Internal Affairs and Communications fell to 2.7% in November, a 24-year low. The jobs-to-applicants ratio hit a 44-year high, according to the Ministry of Health, Labor and Welfare. Stable payrolls moderately pushed up consumption and inflation in Japan.

The unemployment rate edged lower from 2.6% in October, its first fall in five months. The actual unemployment rate, taking employment mismatches into account, is believed to be around 3%. A reading lower than 3% signifies that the Japanese economy is at full employment.

"The deflationary mindset of corporations and consumers has eased as the job market has gotten tighter and tighter for a considerable period of time," said Atsushi Ito, head of the Financial Research Department at Shinsei Bank. "With the recovered mindset, we started seeing the tight labor market finally push up wages, consumption and inflation -- the mechanism we've wanted to see, but couldn't make happen."

The number of jobless is decreasing in Japan. There were 1.78 million wholly unemployed workers in November, a 190,000 decrease year on year. The figure was the lowest since December 1994.

The jobs-to-applicants ratio, which shows jobs offered per job seeker, was at 1.56 in November. It improved slightly by 0.01 point from October, the highest since January 1974, when Japan was in its high economic growth period.

Corporations moved to hire permanent workers in anticipation of a labor shortage in the future. The jobs-to-applicants ratio for permanent jobs hit an all-time high of 1.05.

Consumer sentiment continued its recovery, supported by the increase of higher-paid permanent workers. According to the household expenditure survey conducted by the Ministry of Internal Affairs and Communications, a typical household with more than two members consumed 277,361 yen ($2,400) worth of goods and services in November. Without price fluctuation, it increased by 1.7% year on year, the first rise in three months.

Households spent 30% more on durable goods as they replaced refrigerators and washing machines. They spent 5.6% more on dining out at sushi and Korean barbecue chain restaurants.

As a result, inflation showed a gradual pickup. The consumer price index excluding fresh food was at 100.7 in November, rising 0.9% year on year. The inflation rate disregarding the effect of the consumption tax hike was the largest since October 2014.

Finance Minister Taro Aso said on Tuesday the country's economy was making "small but steady progress" in beating deflation. The Japanese government depends on four indexes such as the gross domestic product deflator to judge whether the country is finally free from its long bout of deflation. In the quarter through September, all four indexes turned positive, which prompted the government to reach the conclusion that the Japanese economy is now in a "shifting phase."

Bank of Japan Gov. Haruhiko Kuroda agrees. "Japan's economy is no longer in deflation, which is generally defined as a sustained decline in prices," he said in his speech at the meeting of councilors of Keidanren, the Japan Business Federation. However, he warned, "price developments in Japan have remained relatively sluggish compared to the economic expansion and the labor market tightening."

Kuroda then gave corporate Japan a push to complete the full circle. "In order for firms to further raise their growth potential, they also need to secure talented human capital by paying appropriate wages," he said. "When more firms follow suit, this will give rise to a virtuous cycle in the economy as a whole, with prices rising moderately as wages and productivity increase, leading to sustainable economic growth."