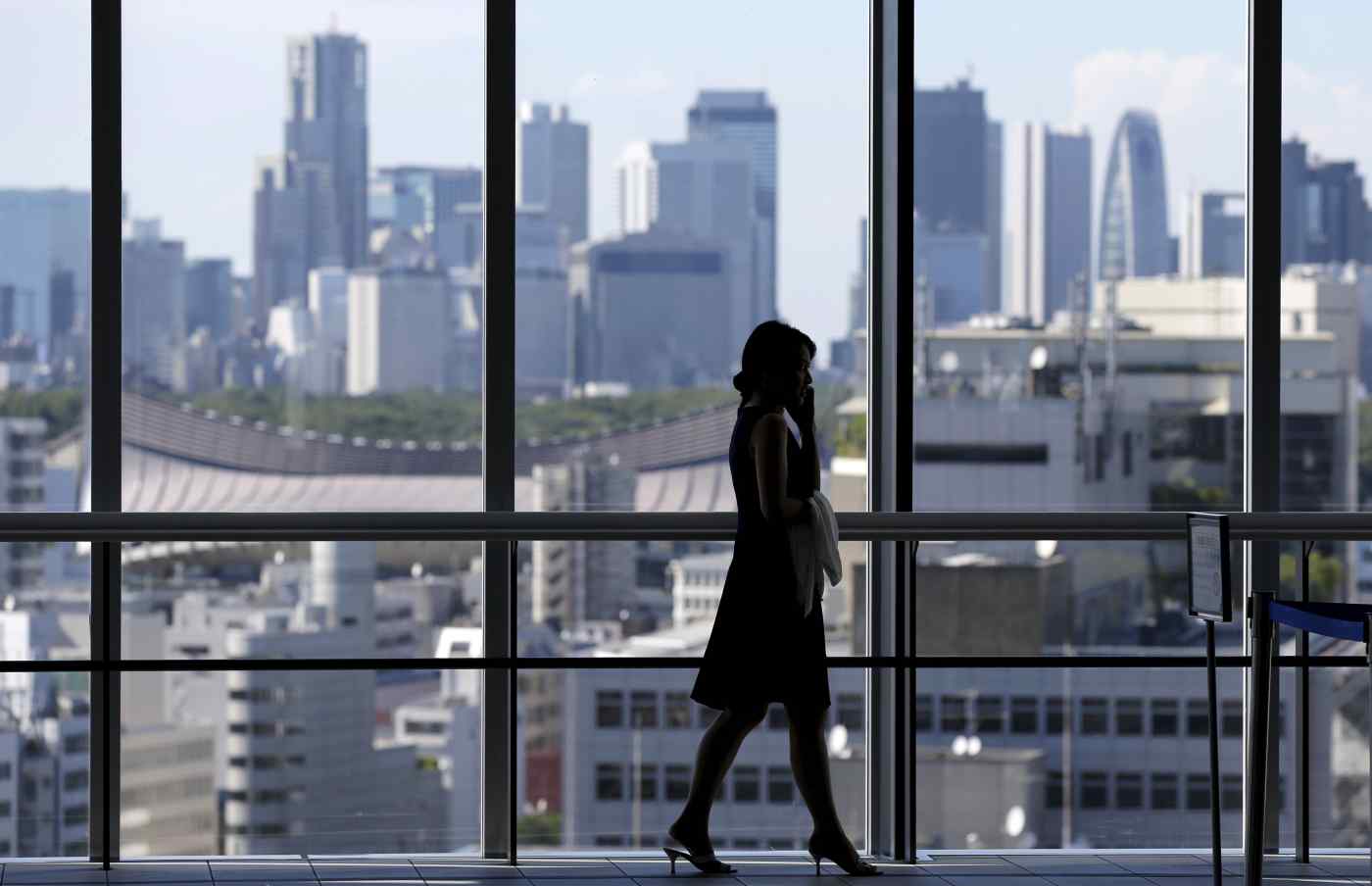 TOKYO -- More Japanese women are staying in work after childbirth as government policy to keep young mothers in the workforce begins to pay off.

A tight labor market due to the shrinking population and the ongoing economic recovery are also factors, flattening Japan's M-shaped curve, a graph showing that female participation in the workforce dips when women marry and have children.

The curve, formerly cited as a sign of the country's poor work environment for women, has recently begun to level. The rate of working women aged 30 to 34 rose to 75.2% in 2017, up from about 50% three decades ago.

The rise in the number of women in their 30s in employment has pushed up overall figures. The rate of workforce participation for women aged 15 to 64 rose to a record 69.4% in 2017, according to the latest survey by the Ministry of Internal Affairs and Communications.

The rate accelerated when the current economic expansion began in 2012, climbing 6 points in five years, and is now higher than those in the U.S. and France, which both stood at 67%, in 2016. A rise of such speed is rare for any part of the world. 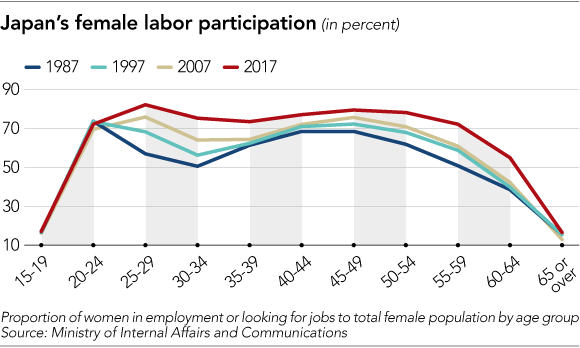 The government's work-style reform policy and corporate efforts to retain female employees have made it easier for young mothers to keep working.

The number of full-time female employees aged 25 to 34 increased by 40,000 in 2017 from the previous year, while the ranks of their non-regular counterparts shrank by 30,000.

In October 2017, legally mandated child care leave was extended to when a child becomes two years old, making it possible for more mothers to return to work.

The rigors of childbirth and child care, however, can still keep many from working. Some 890,000 women are resigned to being jobless because of this, according to the ministry's survey.

"There is still much room for growth in women's labor-force participation," says Hitoshi Sasaki, chief forecaster at Japan Center for Economic Research. Sasaki predicts that the participation rate will continue rising until fiscal 2019, which starts in April 2019.

Japan's recovering economy is facing a labor crunch, which is particularly serious for small and midsize companies, as well as service industries like retail, restaurants and transport, which are pinning their hopes on female and older workers.

Meanwhile, as companies expand payrolls, wages are beginning to rise, especially for part-time workers. "The economy is approaching the phase of pronounced pay growth" for both part- and full-time workers, said Ryutaro Kono, chief economist at BNP Paribas Securities (Japan).

Career earnings of women with college degrees can exceed 200 million yen ($1.87 million) if they return to full-time jobs after taking up to two leaves of absence, even if they work reduced hours while bringing up their children, according to Naoko Kuga, senior researcher at NLI Research Institute. But lifetime earnings will reach only 60 million yen if they leave the workforce after the birth of their first child and return as part-time workers after rearing their second.

Hence, better working conditions for women with young children would contribute significantly to putting the economy into a cycle of healthy, sustained growth.

But the government needs to do more for working mothers. For example, many have difficulty finding day care centers, with 26,000 children on waitlists for facilities as of April 2017, the third straight year the number increased.

It is not for lack of trying: The Ministry of Health, Labor and Welfare increased day care center capacity by about 600,000 children during the five years to March 2018, with plans to expand it another 320,000 by fiscal 2020.

But demand for day care is already growing faster than expected as more women stay in the workforce, a problem exacerbated by a shortage of day nurseries for 1- to 2-year-olds.

Fathers also factor into the equation, with more needed to help with child rearing if more women want to continue to work. But only 3.16% of eligible male workers took child care leave in fiscal 2016.

The large gender gap in working terms and conditions is another problem for professional women. Among female workers aged 25 to 44, 46.3% work on a non-regular basis, compared with 11.9% for men, according to the internal affairs ministry's survey.

The labor ministry's wage survey shows that women earn 27% less than men on average, with many compelled to work as non-regular employees. Let's get real about female equality in corporate Japan

The long hours required of regular employees also keep women from working full time, according to Mika Ikemoto, senior researcher at Japan Research Institute. Even many highly educated women have to settle for part-time work due to the difficulty of juggling jobs and raising kids.

Experts are calling for additional policies to put more women to work, with a focus on those aged 25 to 29, of which 80% are working compared with more than 90% for men.

Efforts are needed to make it easier for women to find jobs, and to promote flexible work styles, such as working from home.

Growth in the number of working women that is flattening the M-shaped curve will not continue past 2030, predicts Koya Miyamae, senior analyst at SMBC Nikko Securities.

With the country's workforce continuing to shrink, government must push additional reforms to make it easier for people to work while rearing children.