Li Keqiang running out of time to lift China's economy Representatives gather on the stages at the Great Hall of the People as the National People's Congress opens on March 5. in 2016 (Photo by Akira Kodaka)
KEN MORIYASU, Nikkei staff writerMarch 5, 2016 21:25 JST | China
CopyCopied

BEIJING -- As the global economy shivers from China's economic slowdown, perhaps the annual gathering of the National People's Congress has never been so closely watched.

True, it is mostly a rubber stamp parliament; not a single word of the Government Work Report will be altered during the 12-day session. Yet the eyes of the world were focused on Beijing's Great Hall of the People on Saturday, trying to read between the lines of the report, which Premier Li Keqiang read aloud.

China is tasked with striking a balance between drawing a healthier road map to tomorrow and preventing today's economy from falling too fast. 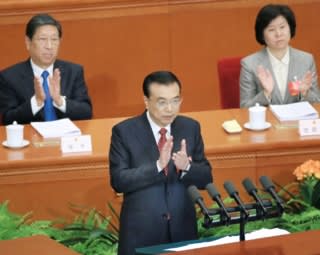 Li himself described it best. "Pursuing development is like sailing against the current," he said. "You either forge ahead or drift downstream."

The figures Li laid out already indicate heavy headwinds. Li said China will create "at least 10 million new urban jobs" this year. Xiao Minjie, a senior economist at SMBC Nikko Securities, said he was surprised at the feeble target. "There will be 7.65 million new college graduates and around the same number of high school and middle school graduates looking for jobs," he said. "That's 15 million already."

On top of that, China is set to eliminate "zombie companies," loss-making, mainly state-owned enterprises kept afloat by government support. Some 5 million to 6 million jobs could be lost in the process.

This is the real test -- whether Li can put these zombies "under the knife," as he said he would in December.

In the past, as China's gross domestic product soared, job creation almost took care of itself. In a recent China Daily piece, Liu Xiaoming, China's ambassador to the U.K., said, "Of course, China's growth rate [during the recent slowdown] could easily have exceeded 7% if the energy- and pollution-intensive industries had been given free rein, or if massive stimulus measures had been applied."

Liu also warned that China will have to exercise some will power as it tries to lose some weight. It "won't be without its discomforts or pain," the ambassador said. "But just as perseverance will see one through a diet -- to less fat, stronger muscles and a healthier body -- so it is with the Chinese economy."

The Government Work Report contains both a health-conscious menu and plenty of deep-fried appetizers. In the first group count innovation-driven development and measures to ensure Chinese cities have blue skies 80% of the year. Among the side orders are promises to invest 800 billion yuan ($122 billion) on new railways and 1.65 trillion yuan on road construction.

SMBC's Xiao said he gives "full marks" to China's decision to allow the government deficit to increase to 3% of GDP, up from last year's 2.3%. "I was worried that they would only raise it to maybe 2.8% of GDP," he said. "This shows they are committed to expanding fiscal measures to shore up the economy."

According to the official Xinhua News Agency, the 0.7 of a percentage point increase translates into 470 billion yuan, based on the size of China's economy last year. Li promised to use this money "primarily to cover tax and fee reductions for enterprises."

Meanwhile, during his hour-plus speech, Li made almost no mention of how to deal with future stock market fluctuations, an omission that hints of a party leadership struggling with the issue.

After months of turbulent stock market swings and a bungled attempt to stop them, Beijing in February abruptly fired the government's chief securities regulator.

Those zombies, however, represent an even thornier challenge. "Some [of the state-owned enterprises] will be developed through innovation," Li said, "others will be reorganized or merged, and still others will exit the market."

One way China hopes to rise to the challenge, Li said, is by experimenting with a competitive selection process in hiring executives and managers to reform these enterprises.

"This is hardly enough" said Kunihiko Miyake, research director at the Canon Institute for Global Studies. "Bringing in a bunch of outside professionals is not going to change the Chinese economy. They have to start privatizing these SOEs."

Painful reforms will involve political risks, especially as the Chinese Communist Party heads to a reshuffle of its leadership at the Party Congress, to be held in the autumn of 2017. Beijing will be rife with factions vying to secure spots on the Standing Committee of the powerful Politburo.

As for that current, Li himself could be sailing against it. Rumors are echoing through the chambers of the Great Hall that President Xi Jinping may be thinking about replacing Li.