One symbol of the country's public-sector-driven economic growth is the monotonous landscape along the bus route linking Kuala Lumpur, the capital, with the southern state of Johor. Passengers in expressway buses traveling along the route get bored soon after the four-hour ride begins as they watch endless wayside stretches of man-made palm forests.

Palm trees have always been grown all over the country for palm oil, which is widely used for cooking, but the fast-growing scale of palm monoculture in Malaysia is a product of the government's economic policy. 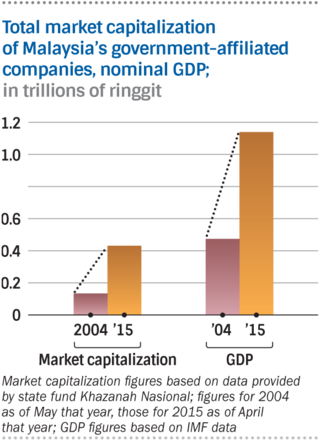 Under state efforts to promote export industries, huge tracts of jungles have been cleared to make space for palm growing. The total area of palm farms in the country increased by more than 150% from 1990, to 5.2 million hectares in 2013. They now cover 15% of the country.

But global demand for palm oil has sagged due mainly to China's sharp economic slowdown. Malaysia's exports of the product during the first six months of 2015 fell by more than 10% from the year-earlier period. Yet, government-affiliated palm oil businesses have continued buying land for palm forests. Their stocks are consequently trending down.

Since its independence in 1957, Malaysia has been continuously governed by ruling coalitions led by the United Malays National Organization, the country's largest political party.

Capitalizing on its solid political power base, the United Malays National Organization-led government has been monopolizing the industrial policymaking process. Government-affiliated companies have been acting as agents to execute the strategies developed by the state.

This formula, conceived and actualized by former Prime Minister Mahathir Mohamad, who ruled the nation for 22 years, has been criticized as a typical example of the Asian-style "development dictatorship." But there is no denying the approach served as the driving force for the country to rise beyond a developing nation.

Stifling the next phase

The problem is that the government's dominant presence in the economy has continued even though the country's economy needs to mature further and enter a new phase of evolution.

Government-affiliated businesses reign supreme in almost all industries. The total market capitalization of Malaysia's 17 leading companies has been rising far faster than growth of the nation's gross domestic product.

The government's excessive control of the economy is now threatening to choke the country's future growth.

Epitomizing this structural problem is the state investment fund 1Malaysia Development Berhad, referred to as 1MDB. The fund, founded by Prime Minister Najib Razak, has been snapping up all the properties and power generation plants it can lay its hands on, running up debt of more than 1 trillion yen ($8.3 billion) in the process.

The fund has been teetering dangerously on the brink of failing to repay its debts. In addition, Najib, who heads 1MBD's board of advisers, has been implicated in a money scandal involving the fund. This situation has violently rocked the country's political community and caused the country's currency, the ringgit, to sink to a 17-year low.

The biggest problem with the nation's economic governance is the lack of transparency, exemplified by 1MDB being reluctant to disclose its financial information. The government has lost the trust of the public.

The investigation into the allegations against Najib is still in process. But it will be difficult for the leader to regain the trust of both the public at home and the international community, says Wan Saiful Wan Jan, chief executive of the Institute for Democracy and Economic Affairs.

Malaysia's economy has been growing at brisk annual rates of around 5% through the April-June quarter. It also quickly emerged from the global recession triggered by the failure of Lehman Brothers in 2008. The government fueled growth with state-backed development, but it also engineered, to a large extent, another main driver: strong consumer spending.

Shortly before 4 p.m. one recent day, the parking lot for employees at a government office complex in central Kuala Lumpur suddenly came to life. The parking lot was thronged with people going home after a day's work. There are rumors that many government employees leave before the end of their working hours.

It is estimated that the share of government employees in the nation's overall working population is twice as large as that in neighboring countries. The Malaysian government is apparently trying to prop up consumer spending by splurging on its payrolls.

End of the line?

But this largesse is financed by public borrowing. The total government debt load is now equivalent to 55% of GDP, and credit rating agencies are threatening to downgrade the country's sovereign debt. Alarmed by this, the government introduced a 6% sales tax in April, causing the consumer confidence index to plunge to a record low.

This episode underscores the limitations of the government's debt-financed efforts to boost consumer spending, and the Malaysian economy is now beginning to falter after years of brisk growth.

The nation's government-led expansion strategy, which worked well during its high-growth era, is now failing to provide the momentum needed for the country to achieve its main policy goal of joining the ranks of industrial nations by 2020.