MALE, Maldives -- On Addu Atoll, at the southern tip of the Maldivian chain, a 29-year-old bonito fisherman has been advised "not to make political comments." But Iyaas can't help talking about what looks like a bright future.

"The FTA with China will be good, at least for us," Iyaas said about himself and other fishermen. "We'll be able to sell more skipjack tuna."

But Iyaas says he doesn't know how the free trade agreement will play out for his fellow countrymen.

Even before China and the Maldives last month signed the FTA in question, the paradisaic archipelago's increasing economic dependence on China was raising red flags.

The Maldives' imports from China now exceed those from neighboring India. Beijing has also become the islands' biggest lender. And debt owed to China is surging at a worrisome rate.

Iyaas sees success ahead because fish account for 97% of the Maldives' exported goods. The percentage rises to 99.7% for exports to China.

The FTA "will enable the exemption of duties on fisheries products exported to the world's largest consumer market," Economic Development Minister Mohamed Saeed said during a briefing at the end of November after the government decided to sign the FTA. 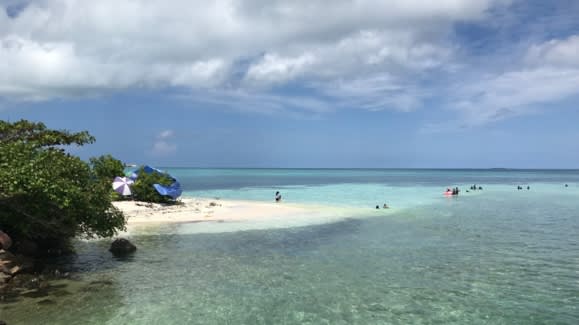 This beach on Addu Atoll, in the Maldives' south, is for locals. (Photo by Yuji Kuronuma)

But the overall trade balance tells another tale. Since the Maldives has to import so much, its trade of goods is chronically in the red, and it runs a heavy deficit with China.

In 2016, imports from the Chinese mainland and Hong Kong were nearly 200 times those of exports. "There should be beneficiaries around President [Abdulla] Yameen from this FTA," said Aminath Nadira, a former council member of the ruling party who now opposes the government. "But the normal people -- those at medium and small businesses, wholesalers and retailers -- they will suffer the most damage."

The Maldives used to maintain a trade surplus due to the resort islands' strong service sector. But the country swung into a trade deficit in 2016. The main reason is infrastructure projects promoted by President Yameen that require machinery, cement and other materials from China. The dependency ratio on Chinese imports reached 16% in 2016, exceeding the 13% on imports from India. A signboard that reads "a project to build a world-class bridge" can be seen along the coast in Male. It is in Chinese. The 2km China-Maldives Friendship Bridge will link the capital and an airport island. The project is funded by the Chinese government and is being undertaken by a Chinese company.

On the reclaimed island of Hulhumale, north of the airport island, another Chinese company is constructing 7,000 homes. The contractor has taken out a loan from the Industrial and Commercial Bank of China.

China-funded projects are also underway elsewhere, like a housing complex surrounded by a forest on Addu Atoll. The complex, said to have 260 apartments, is painted red and pink. "It's almost completed," said a person in charge of the site who was playing mahjong in a prefabricated hut on New Year's Day. "We are waiting" for the Chinese company to hand it over to the Maldivian government.

Finding out about China-led projects is difficult. "Since the government doesn't announce details of those projects," said a diplomat based in Male, "nobody knows the overall picture." 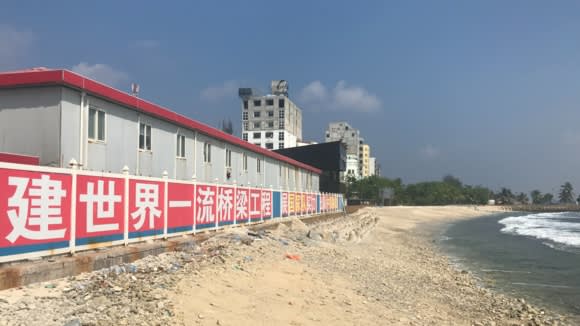 The Maldives has borrowed heavily from China for infrastructure projects, including a bridge connecting the capital Male to the country's international airport on another island.  (Photo by Yuji Kuronuma)

Yameen is the half-brother of former President Maumoon Abdul Gayoom. He won the presidential election in 2013, but his political base is said to be weak. He is seen to be trying to expand his grass-roots support with infrastructure projects.

Some people welcome the president's infrastructure drive. "I can own my apartment if I pay the rent for 20 years," said a delighted woman who has just moved into a new home in Hulhumale.

Yameen wants to concentrate 70% of the country's population on Hulhumale, although skepticism surrounds this ambitious plan. "It is not clear how the government will create job opportunities for all the new residents here," the diplomat said. The infrastructure boom is being paid for by an external debt binge. As of 2016, this debt was equivalent to 34.7% of the country's gross domestic product. The debt-to-GDP ratio will rise to 51.2% in 2021, according to a report that the International Monetary Fund released in December. The IMF also projects that the Maldives' average annual debt service payments between 2017 and 2021 will be $92 million.

The fund has warned that the external debt path is one of vulnerability -- especially should there be an export shock or a slowdown in tourism.

In a recent interview, former President Mohamed Nasheed said the Maldives was falling deeper into a Chinese debt trap. "Already more than 70% of our foreign debt is owed to Beijing," he said, "which gives it huge leverage over us, undermining Maldivian sovereignty and independence." The government argues that the money has been invested mainly in growth-enhancing infrastructure. But "infrastructure projects in the Maldives don't have an economic ripple effect," the diplomat in Male said, because "the Maldives doesn't produce construction materials domestically. They have to import all the materials for their projects starting with cement, steel and even food for laborers."

It has to bring over construction workers, too. Building sites are full of Chinese and Bangladeshi laborers; the projects offer little benefit to local communities.

"Selling islands to China will be the only option for the government if the external debt reaches a critical level," the diplomat said.

Last year, Sri Lanka, unable to service its debt to Beijing, handed over the southern port of Hambantota to China on a 99-year lease.

A Male journalist shares the diplomat's view. "We will have to obey everything China wants for the next century. We will lose our sovereignty."

Despite these concerns, no one can put the brakes on the president's policy; the Maldives' checks and balances are too feeble. In July, over 100 soldiers and riot police stormed parliament and forcibly removed opposition members from the building. Many opposition lawmakers and journalists receive death threats. One opposition member had his head impaled into a public road with a knife. He made a miraculous recovery, and suspects were arrested.

But a court, citing a lack of evidence, released the suspects in October. The 2km China-Maldives Friendship Bridge, under construction in Male, will link the capital and an airport island. (Photo by Yuji Kuronuma)

"My phone is full of death threats," said Imthiyaz Fahmy of the opposition Maldivian Democratic Party. One of the messages says, "Mind your own business or we might have to slit your throat."

China aims to expand its economic and military influence to the West with the Belt and Road Initiative. The Maldives is located in the middle of the Indian Ocean, making it a key to Beijing's strategy. A Chinese nuclear-powered submarine is said to have made a port call last year. And there's a rumor that China will build a naval base on a southern island.

The deeper the infrastructure projects sink the Maldives into debt, the more likely it is that China will build military bases on some of the archipelago's 1,200 islands.

For vacationers to these Indian Ocean islets, they could become a paradise lost.