ULAANBAATAR -- Following last Friday's postponement of a much-needed bailout from the International Monetary Fund, the Mongolian government on Tuesday moved to assure the fund that it was ready to make adjustments to a controversial new regulation.

The IMF board decided to delay voting on the loan due to concerns over new rules in Mongolia's 2017 budget requiring foreign companies operating in the landlocked central Asian country to bank with local institutions.

According to the Mongolian ministry of finance, Rio Tinto, the biggest investor in the country and 56% owner of the Oyu Tolgoi copper and gold mine which is 34% owned by the government, filed a complaint to the IMF. It objected to the recent budget which, as well as introducing tax increases and other changes ostensibly to meet the IMF's bailout conditions, also required foreign investors to use Mongolian commercial bank accounts for sales transactions. Khayankhyarvaa Damdin, head of the ruling Mongolian People Party's parliamentary caucus, said: "Without the grant from the IMF Mongolia can't move forward ... [The MPP] has decided that we will change the new regulation again. Because the economy is in a dire state, Mongolia first needs to be part of the grant, after that we will discuss whether foreign investment should go through a Mongolian bank."

Mongolia was expecting to receive $440 million from the IMF after its board members met last Friday. Following approval of the loan, Mongolia will also be able to get an additional $5 billion from IMF partners including Japan, South Korea, the Asian Development Bank and the World Bank over the next 10 years in order to tackle the country's budget deficit and debt crisis.

At a press conference on Tuesday, the IMF's local representative Neil Saker said: "The IMF will approve Mongolia's loan in the next two to three weeks. The IMF is unable to comment on the Mongolian government's agreement with a certain company." He said the IMF was proceeding with caution because of the effect of the recent regulation on the country's foreign investment environment. "Mongolia must provide a friendly environment for foreign investment which is good for economic growth," he said. 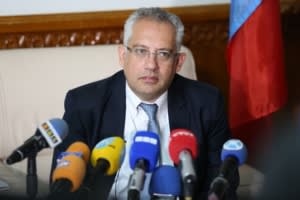 Rio Tinto currently uses Mongolian bank accounts only to pay local employees' salaries and local taxes. The miner spent $6.4 billion on open-pit mining at Oyu Tolgoi between 2009 to 2013, contributing to the country's 17% economic growth over that period. But a commodities slump has hit the mining-reliant country.

Rio Tinto told the IMF and Mongolia's finance ministry that it would only use banks with at least AA rating from international agencies such as Moody's and Fitch. No Mongolian bank falls into this category. It highest-rated bank is Japanese-owned Khan Bank, with a rating of Caa1 from Moody's and B- from Fitch.

Rio Tinto representatives at its local office declined to answer questions from the Nikkei Asian Review.

The lawmakers who proposed the amendment believe the new regulation will allow Ulaanbaatar more insight into how much the Oyu Tolgoi mine project earns and spends and can tax it accordingly. According to Damdin, parliament will not remove the new regulation entirely, but some parts will be changed.

Davaasuren Tserenpil, a member of parliament who proposed the FDI change, said that the new regulation did not currently encompass sales related to the Oyu Tolgoi mine. But he stressed the importance of raising the country's foreign currency reserves. "I want foreign investment to come through Mongolian banks, in essence increase the foreign currency reserve, which will stabilize the value of the domestic currency."

In its latest budget, Ulaanbaatar dropped some of its social welfare offering by raising the retirement age and cutting allowances to children and pensioners. It also increased the duty on alcohol, tobacco, automobiles and petrol despite heavy opposition from businesses and other groups.