YANGON -- Myanmar's economy is set to recover despite a humanitarian crisis in Rakhine State, while the ruling National League for Democracy -- two years after it won its historic election victory -- finally prepares a comprehensive plan for economic development.

Analysts, foreign investors and the local business sector were calling for clarity on the administration's plans for economic reform even before it took office in April 2016. A 12-point plan published that same year was frustratingly light on detail. "They [the NLD] have made nary a peep since the economic policy was revealed last year, which was too broad," said Erin Murphy, principal of the Myanmar-focused business strategy firm Inle Advisory Group.

Some observers point to this silence as a factor behind a supposed slowdown in foreign investment. But as the government prepares to provide more clarity on its economic plans, new insight from the International Monetary Fund and World Bank is helping separate rhetoric and reality regarding Myanmar's economy. Critics both local and international have claimed that under the new government, growth has started to slow and foreign direct investment has dropped sharply. The crisis in Rakhine, they say, is going to make things worse. The problem is that given all the available data, none of those things appear to be true.

Growth in gross domestic product actually started slowing in 2014-15 -- two years before the NLD took power -- and dropped every subsequent year to hit 5.9% in 2016-17, according to the World Bank. It is expecting growth to recover to 6.5% this financial year and the IMF is predicting 6.7% expansion. The government was also dealt a very bad economic hand for its first year. Devastating floods hit agriculture and by extension food processing -- a huge chunk of the economy. Higher imports weakened the currency, hitting manufacturers across the board. Crumbling prices for natural gas exports killed a cash cow that would have provided a cushion in earlier years.

On FDI, which receives far too much focus as a metric for the NLD's success, the simple answer is that a lack of reliable data means no one really knows the extent of foreign investment. The only source of economy-wide FDI estimates is the IMF. Shanaka Peiris, head of the IMF's latest economic mission to Myanmar, told NAR on Nov. 17 that all evidence points to FDI being higher in 2017-18 than it was the year before the government took power.

The fund had predicted $4.7 billion in FDI this fiscal year, but is revising its estimate up significantly for two reasons: strong momentum in investment demand, and the fact that the IMF now has better coverage of FDI data through the banking system. "[But] we can't take that [better] coverage backwards, so we have a structural break [in FDI estimates]," said Peiris at a Yangon press conference. Together with the fact that one-off spikes in FDI from sectors like telecoms and oil and gas have passed, this break should help end the fool's game of judging the new government on yearly FDI comparisons. 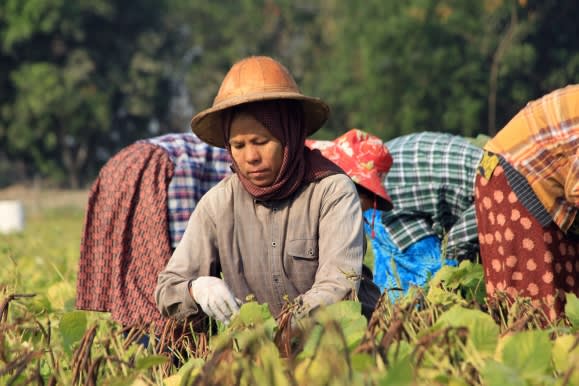 Finally, the IMF sees no evidence of wider economic fallout from the Rakhine crisis, which has remained "localized in the region," Peiris said. There may be some future impact on tourism, "but you don't see it in the numbers yet," he added.

An end to inaction

Predictions of a drop in investment from European and U.S. investors worried about reputational risk or economic sanctions could still prove correct. But U.S. Secretary of State Rex Tillerson said on Nov. 15 he was advising against "broad-based economic sanctions" in response to the crisis, and U.S. investment is already minimal. Europe is the biggest market for Myanmar garments, but whether there is appetite for EU sanctions that would hit a sector employing mostly young women remains to be seen. In the meantime, regional investors -- by far the largest source of investment -- show no signs of being sidelined.

None of this absolves the NLD government from accusations of inaction on the economic front. The government does not deserve blame for much for the recent drop in GDP growth. But similarly it cannot take much credit for the predicted rise, which is mainly down to a recovery in agriculture and exports supported by more spending from higher tax revenue. Many of the government's successes, from a new investment law to improved tax collection, are simply the continuation of initiatives begun by its predecessor.

"The NLD still hasn't really put its own stamp on anything," a Yangon-based economist for an international organization said.

The administration's new comprehensive economic plan and second wave of reforms could finally change that. The IMF is clear that such a framework should include a focus on agricultural productivity and diversification, opening up more areas of the economy to investment and more financial inclusion and lower business costs. "That seems to be their [the government's] thoughts too," Shanaka said.

But the government has a record of drawing up master plans for various sectors only to stall on implementation. The administration has three master energy plans "but is yet to settle on one or decide what mix of energy they want to implement," said Murphy. Analysts are worried that the same story could play out for a multi-sector strategy.

It is clear that much of the unrealistic hype around the economy has drained away, but there is still reason for hope. Myanmar's economy is shock-prone, vulnerable and the government is hamstrung by capacity issues and indecision. Yet the administration seems to have realized that with three years left there is an urgent need to make progress. A fragile national peace process and the crisis in Rakhine, however, are only the two largest issues that could easily derail reform efforts.