YANGON -- Myanmar was once a world power when it came to rice exports, and it is working hard to become one again.

With the government positioning rice as a main export, Myanmar Agribusiness Public Corp. (Mapco), a major rice trader, is upgrading its facilities and equipment to improve the quality of rice grown in the Southeast Asian country.

Mapco completed construction of a mill in Naypyitaw on June 28. The mill's processing capacity, at 220 tons a day, is midrange. But the plant's large, high-tech dryer has drastically improved the quality and speed of polishing. In Myanmar, most rice is still dried in the sun. The new mill handles rice from farmers under contract with Mapco. It will process rice for domestic consumption to start, but aims to export milled rice in the future.

Chit Khaing, head of Eden Group, a Myanmar conglomerate that runs hotels and other businesses, founded Mapco in 2012, foreseeing the country's agricultural potential. Myanmar is currently the world's fifth- or sixth-largest rice exporter, trailing leaders Thailand and Vietnam. It exported an estimated 1.8 million tons of rice in the fiscal year that ended in March, up 50% from the previous year. 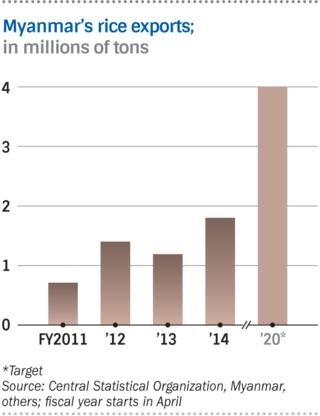 Rice from Myanmar is the cheapest in Southeast Asia, due to the low cost of labor in farming villages. But the yield after polishing is less than 50%, compared with more than 60% in Thailand and Vietnam. The country's mills are run-down because they were starved of investment under military rule.

Mapco will accelerate infrastructure improvements to boost rice exports from Myanmar. In addition to the new mill in Naypyitaw, it is considering building an export warehouse near the port of Thilawa, southeast of Yangon. The company plans to build another mill, together with Japanese trading house Mitsui & Co.

The government, which announced a new export strategy this spring, will provide support for rice. It has positioned the commodity as a key export, along with rubber and textiles.

Myanmar sends 70% of its rice exports to China, but most of these shipments are not authorized by China's government. China complains about the low quality of these shipments, and this has hampered Myanmar's efforts toward a long-term increase in exports. The Myanmar government has responded by promising to select exporters whose grain meets Chinese quality standards. Mapco was chosen as the first officially certified rice exporter earlier this year and is expected to begin shipping to China by the end of July.

The government will also ask Beijing to expand its import quota. Mapco also sends rice to Japan under a tie-up with Mitsui that began in 2013. And shipments to the European Union have been increasing since the EU revived a preferential tariff regime for products from Myanmar. The Myanmar Rice Federation forecasts exports will more than double by fiscal 2020 from the fiscal 2014 level to 4 million tons.

Just after World War II, Myanmar was one of the world's top rice exporters. But strict controls on prices and production introduced by military governments in the country then known as Burma sapped farmers' morale and effectively shut them out of world markets. Now rice traders in Myanmar are looking to get back into the exporting game, thanks to easier regulations brought in under the country's democratic reforms. Backed by a currency that has fallen in recent years, Myanmar may soon be competing for the rice exporting crown again.