YANGON -- Myanmar's economy looked like it was enjoying a brisk tailwind after progress in democratization led the U.S. to lift its sanctions last year, but the boost appears to be waning.

The government that took office in March 2016, with pro-democracy icon Aung San Suu Kyi as its de facto leader, has so far proposed few economic policies. Foreign businesses still see the country as a promising place for infrastructure investment and as a production base, but many are waiting to launch new projects because of uncertainty over economic policies. With its currency falling, Myanmar is expected to post its slowest growth in five years in 2016. One positive sign is a revision of the corporate law expected in the coming months, which is likely to allow foreign businesses to hold stakes in existing domestic companies. If the revision leads to active corporate mergers and acquisitions, it could serve as an opportunity to reinvigorate the economy.

The World Bank's "Global Economic Prospects," released on Jan. 10, highlighted Myanmar's slowdown. Real-term economic growth in 2016 is estimated to be 6.5%, down 1.3 percentage points from the previous estimate in June last year. The bank estimates that real-term growth posted a year-on-year decline for three straight years and fell below 7% for the first time in five years. Myanmar used to enjoy the fastest growth rate in Southeast Asia, but the country lagged behind the Philippines, Laos and Cambodia last year. Myanmar's growth forecast for 2017 has been revised downward by 1.5 points to 6.9%.

The World Bank attributes the falling growth rate to the sluggish real estate market and slower export expansion. But Seiichiro Sato, chief economist at DMS, a wholly owned Myanmar subsidiary of Daiwa Institute of Research Holdings, said the main reason is declining foreign investment, which drove the economy during the previous government of President Thein Sein.

According to the country's Directorate of Investment and Company Administration, the amount of foreign direct investment approved between April and December 2016 stood at around $3.5 billion, down 28% from the same period a year before. The full-year amount through March 2017 is highly likely to post the first year-on-year decline in four years.

One of the main reasons for the decline is confusion associated with the transfer of power. The Myanmar Investment Commission (MIC), which had the authority to approve foreign investment applications, disbanded in March last year to coincide with the change of government. But no new commission was created in the first three months of the new government, and a backlog of applications built up. The commission is now working properly, but it has been unable to make up for the slow start. Reluctance by U.S. businesses has led to feelings of betrayal in Myanmar. Having concluded that democratization made sufficient progress, Washington in October 2016 lifted its economic sanctions against Myanmar that had been in place for almost two decades. But no U.S. company had made a direct investment in the country since then as of Dec. 31, 2016.

Businesses from other countries also remain cautious. The approved amounts of direct investment by China and Japan between April and December 2016 are only 13% and 23% of their full-year figures for fiscal 2015 respectively. Investment from Thailand and Singapore is relatively solid, but their amount in the first nine months of fiscal 2016 are 45% and 62%, respectively, of their full fiscal 2015 figures. "Many investors, including foreign firms, are waiting to see because the government's economic policy remains unclear," said Junya Ishii, senior analyst at Sumitomo Corporation Global Research.

Suu Kyi's National League for Democracy pledged to implement "real reforms" during the November 2015 general election. Its policy platform included promises such as building infrastructure and reinvigorating the farming sector. The NLD government announced a new economic policy in July 2016, but it only listed 12 main points, such as creating legislation to attract foreign investment. The government was supposed to draw up concrete measures for building infrastructure, inviting investment and creating power supply sources based on the policy. But it has so far failed to do so. It is generally agreed that the concentration of power to Suu Kyi is causing slow decision-making. Under the constitution, President Htin Kyaw, a senior NLD official, is the head of state. But Suu Kyi, who serves both as state counselor and foreign minister, is the de facto leader of the country.

Her authority keeps expanding. The government created the Development Assistance Coordination Unit (DACU) in November 2016 to take charge of allocating foreign aid. The Joint Coordinating Body for Peace Process Funding (JCB) was set up the following month to accept foreign and domestic support for the government's peace talks with ethnic minorities. Both organizations are independent from existing government offices and headed by Suu Kyi.

Diplomatic sources say various matters on national politics cannot be decided without her approval. The concentration of power seems to be efficient at first glance, but there is a limit to the amount of work one person can do, so it actually hampers the decision-making process. The formation of the current MIC was delayed, apparently because she was too busy to choose the commission members.

The fallout is especially serious in the oil and gas sector. Approved foreign investment projects were concentrated in this sector until fiscal 2015, but none has been approved so far this fiscal year. Projects to construct oil refineries or liquefied natural gas plants were suspended after Suu Kyi assumed power. The previous government drafted a plan to develop power supply sources, mainly coal-based thermal power plants. But since the de facto leader hinted at the possibility of reviewing projects that are environmentally unfriendly, operators of refineries or LNG plants have been unable to move ahead.

The thinning inflows of foreign funds are making Myanmar's macroeconomic environment tough. Particularly serious is the depreciation of the currency, the kyat. It strengthened right after the current government took office, but soon started to fall. The Central Bank of Myanmar said the exchange rate was 1,210 kyat per dollar at the end of March 2016, but the rate fell to 1,365 kyat at the end of December. Many Southeast Asian currencies are falling in response to the recent U.S. rate hike, but the kyat is the biggest loser. Myanmar's main export, natural gas, has been hit by the worsening market conditions. Trade in jade is also sluggish because of the slowdown in the biggest market, China. On the other hand, demand for imported petroleum products and construction materials is growing in tandem with the country's economic development, causing the trade deficit to widen. Currency officials at the central bank began to suggest in late 2016 that import restrictions need to be discussed. A weak kyat makes imported goods more expensive. It could further raise the annual inflation rate, which is around 10% at present, and have an adverse effect on the economy.

Another potential risk factor is the persecution of the Rohingya, an ethnic minority group living in western parts of the country. The international community is increasingly critical of the government's handling of the Muslim group. If this becomes a major issue, European and U.S. companies that are sensitive to public opinion may distance themselves from Myanmar in light of risk management. 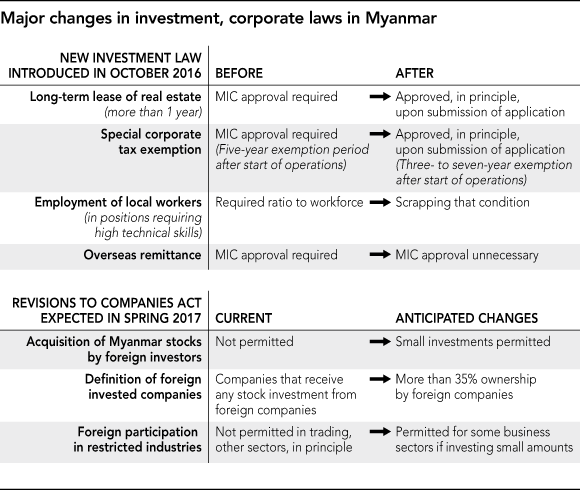 A possible quick remedy for the government is to make its economic policy clear and attract more foreign investment. In this regard, there are several positive factors.

Detailed regulations under the law are likely to be announced in January. Foreign investment is restricted in trade and some other sectors. The regulations are expected to reduce the number of such sectors.

Revising the companies act, which is due to take place in the first half of 2017, is also drawing attention. Myanmar bans foreign companies from having stakes in existing domestic businesses but the revision is expected to allow foreign ownership in some companies. The government is considering setting the upper limit of foreign stakes at 35%. A law firm in Yangon believes that if the law is amended as planned, mergers and acquisitions will rapidly expand this year.

To coincide with the revision, the government is considering allowing foreign investors to trade on the Yangon Stock Exchange, which started operations in March 2016. The stock exchange has attracted some individual investors in Myanmar, but trading volume has shrunk to one-tenth of its peak. The planned revision is seen as the best chance to increase the number of companies that would be able to list their shares in the future to make the bourse more attractive.