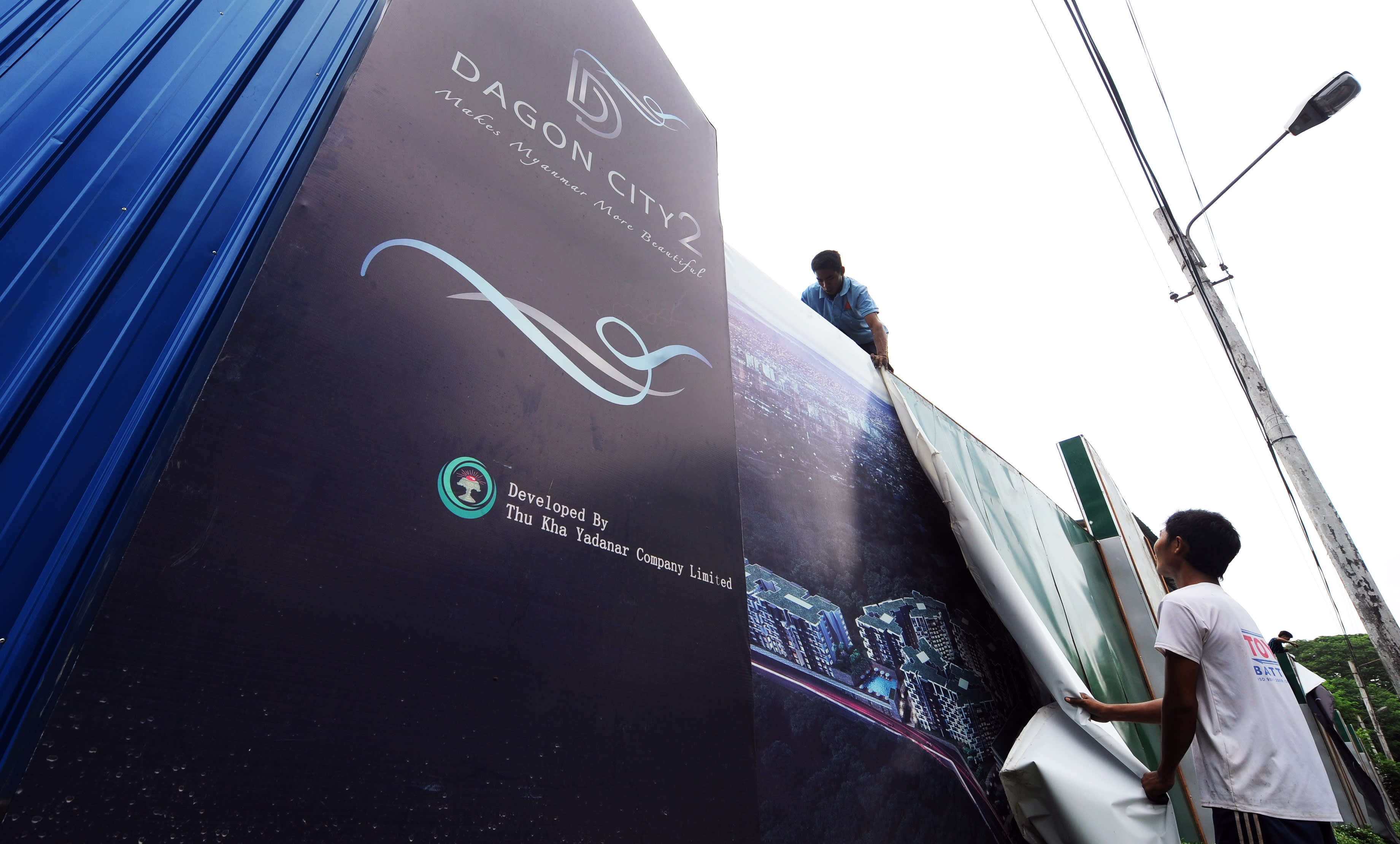 Workers take down a sign heralding a big development after the project was cancelled due to its proximity to a revered pagoda. (Photo by Steve Tickner)
Paul Vrieze, Contributing writerAugust 12, 2015 07:00 JST | ASEAN
CopyCopied

YANGON -- The lead-up to Myanmar's general election, scheduled for Nov. 8, has ushered in new political uncertainties, and the electoral results could stall the country's democratic transition after decades of military rule.

Rapid economic reforms since a quasi-civilian government came to power in 2011 have led to dramatic economic growth, spurred by the liberalization of the private sector and new opportunities for foreign investment.

But as elections and the subsequent challenge of forming a new, more politically inclusive government loom, economists and executives are reporting a decline in investment, notably in real estate.

Some believe the complex political situation will worsen an already unpredictable business environment. For example, vociferous opposition by the nationalist Organization to Protect Race and Religion, known locally as Ma Ba Tha, recently forced the government to cancel a $300 million real estate project because of its proximity to the revered Shwedagon Pagoda, a glittering gold-plated structure that towers over this city.

While experts say it is unclear how the first free general elections in 25 years will shape the economic agenda of a future government, most are expressing cautious optimism that Myanmar will continue reforms that have boosted growth and investment. 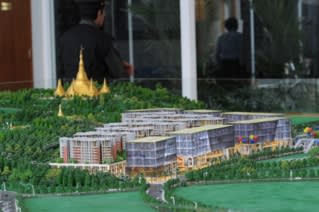 This model shows how the first phase of the Dagon City project might have looked had it not been cancelled. (Photo by Steve Tickner)

"There is some apprehension in the business community and among foreign investors,'' said Nyantha Maw Lin, managing director at political consultancy Vriens and Partners Myanmar. "Businesses like certainty, and this election and the formation of a new government that will follow the vote is new ground for Myanmar.

"But ... I don't detect that they are overly concerned, and rightly so. Our reading is that regardless of the outcome of the vote, the next government of Myanmar will generally follow the economic path the country has been on for the last few years."

Buoyed by the lifting of Western sanctions and re-engagement with international financial institutions, President Thein Sein's administration has been undertaking reforms, reducing the government's heavy interference in the economy and curbing some privileges enjoyed by "crony" tycoons of the previous military junta.

Reforms have included the creation of a foreign direct investment law, changes to the labor law and the opening of foreign investment opportunities in sectors previously controlled by the former military government, including oil and gas, telecoms, banking and finance. Myanmar has also begun developing special economic zones for exporters, most notably the Japan-supported Thilawa special economic zone, near Yangon.

According to the International Monetary Fund, Myanmar's economy grew 8.5% in the year to March 31, bringing gross domestic product to about $65 billion. A similar growth rate is expected this fiscal year. Much of this expansion is due to a dramatic increase in foreign investment, which doubled last year to $8 billion, according to government data.

Major investments have included $3.2 billion in oil and gas exploration involving international giants such as Royal Dutch Shell, $1.6 billion in telecoms by Norway's Telenor Group and Qatar's Ooredoo, and $1.5 billion in manufacturing. Most FDI has come from Singapore, where many Japanese and U.S. investors in Myanmar have registered, as well as from China, Hong Kong, South Korea and the U.K.

The effects of the rapid changes have been most visible in the country's commercial hub of Yangon, home to some 5 million people. Car ownership has sharply increased, mobile phones and international brands have become commonplace, and crumbling colonial buildings are being renovated to house restaurants and bars serving international and local fare.

If investor interest is to be sustained, however, Myanmar will need to deliver on planned amendments to the FDI law, the outdated 1914 Companies Act and the restrictive 1994 Mining Law; it will also have to address structural issues.

But the tenure of current President Thein Sein is drawing to a close, and the post-election political order remains unclear -- as does the continuation of the reform agenda.

At the polls, the main challenger to the ruling Union Solidarity and Development Party is the National League for Democracy, led by Aung San Suu Kyi, the Nobel laureate and de facto opposition leader. Some ethnic minority parties, notably those from Shan state, the biggest ethnic region, are also expected to make strong parliamentary gains.

Concerns over electoral fraud are limited, given promises by the government to allow independent domestic and international observers to monitor the elections. The NLD foresees a clear victory over the USDP, which is dominated by ex-military officers and retired civil servants who took up parliamentary seats as civilians following the controversial 2010 election. However, Myanmar's military-drafted constitution is a huge obstacle for Suu Kyi, who is barred from the presidency because her sons hold foreign citizenship. Most analysts believe the NLD has no obvious alternative candidate for the presidency.

The charter also allows the military to appoint one-quarter of the seats in the national -- or Union -- parliament and one-third in state and regional legislatures. As expected, military-backed members of parliament have blocked attempts to reform provisions that would curb their power.

Furthermore, any NLD mandate to form a government will be curtailed by a parliament forced to vote for a president selected from among three candidates, one of whom will be nominated by the army.

To further complicate matters, the USDP appears split over its presidential candidate. Party chairman and parliamentary speaker Shwe Mann has voiced his ambitions and courted the NLD's support, while another faction of the USDP as well as most of the military reportedly back Thein Sein for another term. The president himself confirmed in a recent interview with the Nikkei Asian Review that he would seek a second term "based on the desire of the people."

Yan Myo Thein, an independent political commentator, said he expects all the political power brokers to hold a dialogue to decide on a mutually acceptable presidential candidate. But an agreement has to be reached within three months of the elections and would hinge on the military's support.

"The chances of a breakdown [in the] dialogue and some level of political confrontation and of street protests are highest in the post-election period," he said. "Such events would hinder a transfer of power."

In April, the International Crisis Group, a nongovernmental organization dealing with conflict resolution, warned that the challenge is not only to hold credible and peaceful elections, "but also to manage the transition to a new political power structure. It is an opportunity to reinforce the reform process, or a moment when zero-sum politics could imperil it."

An additional challenge to a smooth transition is the rise of the Ma Ba Tha conservative Buddhist movement, which holds frequent rallies to denounce international aid for Myanmar's stateless Rohingya Muslims. The movement has so far succeeded in gaining parliamentary support for its proposed legislation to protect Buddhism through restrictions on religious intermarriage, population growth, polygamy and religious conversions.

Despite uncertainty over the nature of any future government, the NLD is likely to play an influential role in setting the forthcoming economic reform agenda. An NLD central committee member in March told the Nikkei Asian Review that it would consider faster banking liberalization, leasing government land to investors in manufacturing and improving labor relations.

Analysts expect Myanmar's reforms to continue as its leaders have acknowledged that the country's development depends on a greater influx of foreign investment, technical expertise and aid. But they warn that tough challenges requiring political will await the new government.

"The low-hanging fruit of reform has been picked," said Erin Murphy, president of U.S.-based Inle Advisory Group, which advises investors in Myanmar. Remaining reforms "are complex, and unless the new government contains a core of technocrats, economists, and applicable technical assistance, it is going to be a slog."

Sean Turnell, an economics professor at Sydney's Macquarie University and an adviser to Suu Kyi, said: "What's needed is a reboot, and this is best achieved by a government with political capital to spend and broad support. My own feeling is that a large NLD victory will be very good for the economy and FDI."

Lex Rieffel, a Brookings Institution economist who has studied aid flows into Myanmar, questioned the capacity of any future government to rapidly address the reform challenge. Thein Sein's government had performed well on reforms, he said, "But I don't know how to apportion credit for this within the government. It is conceivable that economic reforms will continue at the same uneven pace over the next five, six years regardless of what the next government looks like."

What is clear, according to experts and businesses, is that the new phase of political uncertainty is an obstacle for domestic and foreign investment.

According to Turnell, "a huge backlog of potential FDI" awaits the election results and could materialize if a "good and stable government [emerges]. If not, some projects reliant upon a deep footprint into Myanmar's political economy might disappear."

Japanese companies, which account for 24 of 47 approved investments in the Thilawa zone, remain cautious toward Myanmar, and "some [are taking] a wait-and-see attitude toward the general elections," said Toshihiro Kudo, a professor at Japan's National Graduate Institute for Policy Studies who has researched Myanmar's garment sector.

"However, most of the Japanese firms see the potential of Myanmar from a longer viewpoint," he said. "Japanese interest in Myanmar is still high."

In February, a World Bank survey of 632 Myanmar companies identified a lack of access to finance, land, electricity and skilled workers as their main hindrances. Only a few companies cited political instability as a problem. 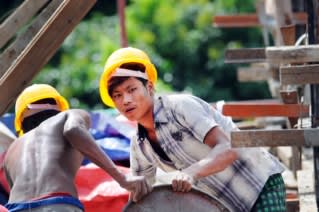 The cancellation of the $300 million development close to Shedagon Pagoda shows how political developments can affect investments, she said, adding that it "could have a chilling effect ... especially if investors are concerned that an approved project could be overturned."

Than Oo, first vice-president of the Myanmar Real Estate Association, echoed her views, noting that the cancellation, looming elections and other issues are contributing to a slowdown in Yangon's real estate sector.

The sector experienced a boom in recent years. As prices soared, new hotel, condominium and office construction began. FDI in real estate amounted to $1.2 billion during the past two years, according to government data.

Real estate developers and would-be buyers, Than Oo said, "all tell us they are waiting to see the results of the election. They are not spending on big projects -- so many people in our economy think like this."