SINGAPORE -- Local banks are feeling the "oil pressure" on their profits, as they face mounting provisions for non-performing loans in the energy sector suffering from a price slump.

The city-state's largest lender by assets DBS Group Holdings announced on Monday that its net profit dropped 6% to 1.05 billion Singapore dollars ($780 million) in the quarter ended in June from a year ago. While interest income and total loans expanded, specific allowances to cover the exposure to the financially troubled local offshore construction company Swiber Holdings swelled and added pressure to the bank's bottomline. 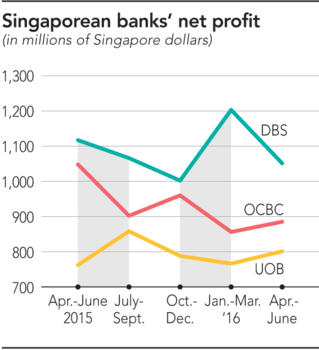 Specific allowances booked during the quarter surged more than 2.5 times to S$366 million from a year ago. Singapore-listed Swiber is in the process of judicial management after it reversed a July decision to wind up.

DBS CEO Piyush Gupta on Monday pointed to the speed at which Swiber fell into deep financial trouble. "[The company] imploded in six weeks," said Gupta. He said there was "no indication of stress" and defended the bank's decision to extend bridging loans to the company in June and July.

"We don't pull the plug on customers," Gupta said.

While there was "no material weakness" in its exposure to the oil and gas sector, Gupta said some in the offshore support services show weaknesses. NPL as of end-June was at S$3.25 billion, swelling by 21% over the previous quarter. DBS' NPL ratio was1.1%, compared to 0.9% a year ago. Gupta said the figure could reach 1.3-1.4% by year-end.

Profit before the allowances was 10% higher on the year at S$1.63 billion, supported by a 5% growth in net interest income and 8% growth in fee and commission income. Despite Singapore's sluggish real estate market, overall loans grew 4% as DBS expanded its mortgage segment. DBS said the bank's full-year loan growth is expected to be in the "mid-single digit."

Weak oil prices are also hurting other Singaporean banks. Bad loans at United Overseas Bank and Oversea-Chinese Banking Corp. increased 22% and 61% on the year respectively due to defaults in the oil and gas sector. The sluggish recovery of oil prices have led to a fall in oil exploration activities, plunging construction and services companies in this sector into trouble.

UOB is another bank with outstanding loans to Swiber. At a press conference last month, Chief Executive Wee Ee Cheong said the bank's exposure to Swiber was "manageable." Despite such headwinds, UOB's net profit for the April-June quarter grew 5.1% on the year to S$801 million, backed by stronger trading income.

By contrast, OCBC's quarterly net profit fell 15% on the year to S$885 million, due to lower net interest income amid weak loan demand and a thinner interest margin. Chief Executive Samuel Tsien said the oil and gas sector had more distance to fall. "We will not lead you to believe [the NPL] cycle has already peaked," Tsien said at a press conference last month.

Concerns over Singapore's banking sector is mounting as both the city-state and its regional trading partners such as China and Malaysia struggle with slower economic growth. In March, Moody's Investors Service lowered its rating outlooks for Singapore's three banks over 12 to 18 months from "stable" to "negative." Moody's said the drop in oil and other commodity prices was one of the key concerns for corporate debt, creating higher problem loans and provisions for the banks and lowering their profitability.

OCBC and DBS have sizable exposures in China, which is facing a slowdown in economic growth. DBS' Hong Kong operations saw its net profit dip 34%, recording the first year-on-year drop since 2009.

The Hong Kong arm booked higher specific allowances as the unexpected devaluation of the yuan worked against the hedging positions of their small- and medium-sized clients, aggravating their financial situation and causing them to default. The bank expects a smaller amount of specific allowances related to yuan derivatives in the second half of the year.