Extensive damage to a road in Kumamoto caused by the earthquakes that have recently struck the region.
KOSUKE TAKAMI, Nikkei staff writerNovember 28, 2016 19:00 JST | Japan
CopyCopied

TOKYO -- Despite being one of the most seismically active countries on the planet, Japan has an earthquake insurance penetration that remains astoundingly low.

Reportedly, only 10% of Japanese companies, and about 30% of the total appraisal value of real estate in the country, are covered by earthquake insurance policies. 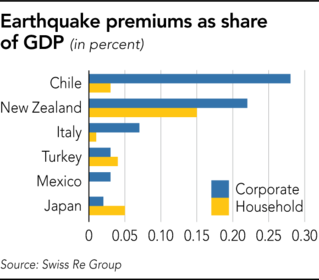 Both Japan and New Zealand were struck by major earthquakes in 2011. However, there was a huge gap in the figures showing the economic losses covered.

A total of 17% companies and households had cover in Japan, while the figure was 75% in Christchurch alone. The damages had far-reaching ramifications in both countries, but there was a considerable difference in how well prepared they were.

In another indicator of the reality for earthquake-prone Japan, Swiss Re Group estimates that the country's uninsured natural disaster loss amounts to $27.9 billion a year. That equates to a 0.63% share of gross domestic product -- the second-highest of any major country.

The reasons for Japan's low take-up of earthquake insurance can be traced to certain behavioral principles unique to both insurers and policyholders.

Japan's earthquakes are one of the five risks that the reinsurance industry, which underwrites the payout risk of nonlife insurers, takes into account -- alongside hurricanes in the U.S. and winter storms in Europe. If payouts increase globally due to terror attacks and hurricanes, the premiums required by reinsurers will fluctuate significantly.

After years of deflation, Japan's nonlife insurers, reluctant to drastically change premiums for corporate clients, are trying to curb the number of contracts. Many market insiders point out the difference they have with foreign insurers, who focus more on the balance between risk and premiums.

In June 2015, a major nonlife insurer issued a statement to agents that there will be a limit in underwriting. The statement said quotes will only be provided to clients that meet certain conditions.

Some market analysts argue insurers would be better off focusing on profitable new insurance products, such as directors' and officers' liability insurance or cyber insurance, rather than selling unprofitable earthquake policies.

"Japanese companies are much more likely than their foreign peers to shy away from earthquake insurance," an official of a major insurance agent said.

The reluctance is understandable, considering the premiums demanded for earthquake insurance can be several tens of times higher than fire insurance premiums. While this may be an appropriate level in view of the risk, many Japanese companies do not even have risk managers.

Furthermore, some market watchers have criticized Japanese insurers for monopolizing policy contracts by using cross-shareholding with former zaibatsu companies -- the big conglomerates that ruled Japan's economy through the end of World War II.

It has been pointed out that Japanese business practices -- which have put cross-shareholding networks first -- have made it difficult for foreign insurers to enter the market and are holding agents back from improving their ability to make proposals.

An official of the Foreign Non-Life Insurance Association of Japan, whose members include AIG and other global insurers, said the Japanese market is preventing foreign insurers from improving how they pitch to companies.

The council, set up in September by the Cabinet Office, is aimed at encouraging companies to enhance their financial preparedness for disaster related problems, such as the preconception that taking out earthquake insurance is difficult and casualty losses are underestimated.

Toyota Motor's public relations officer said that one of the reasons for the automaker's huge cash reserves, which amount to about 4 trillion yen ($35.8 billion), is "to prepare for disasters such as earthquakes."

This is not uncommon. Several Japanese companies hold large amounts of cash as contingency for disasters, but excessive deposits in lieu of earthquake insurance could lead to lower capital efficiency, such as investment and shareholder payouts.