TOKYO -- The Philippine government has called on cash-rich Japanese companies to invest more in the country, with senior officials and the central bank governor making the case for the fast-growing economy at a seminar in Tokyo.

To attract that cash, Manila needs to instill some confidence in investors. That was the main aim of the event hosted by the country's Tokyo embassy on Sept. 26, titled "The Rising Philippine Economy: Powering Gains with Global Partners through Shared Goals."

First of all, the delegation sought to allay fears over a weakening peso.

Bangko Sentral ng Pilipinas Gov. Nestor Espenilla Jr. described the currency, which had reached an 11-year low against the dollar in mid-August, as being "in line with economic fundamentals."

But rather than being vulnerable to external shocks as it was during the Asian Financial Crisis, the country now has investment grade ratings with lower debt outstanding, he said. 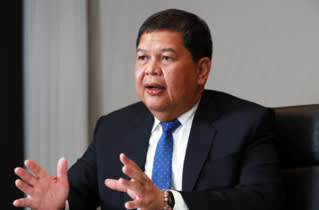 BSP governor Espenilla Jr. said the peso is in line with economic fundamentals.

A lower peso could even strengthen the economy, he explained in an interview. "Peso depreciation is pushing export and foreign investment higher."

Secretary of Finance Carlos Dominguez agreed. "People say the peso is underperforming. But when it is supporting the economy, it is actually performing," he said in a panel discussion.

Another major concern for investors is the government's battle with corruption, vested interests and other stumbling blocks which could hamper President Rodrigo Duterte's massive infrastructure investment drive.

"Build, Build, Build," said Ernesto Pernia, the secretary of socioeconomic planning at the National Economic and Development Authority, quoting one of the slogans of "Dutertenomics" and emphasizing the administration's commitment to tackling the problem. "The president has zero tolerance on crime and corruption." 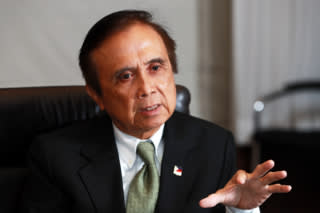 Secretary Pernia claimed the situation in Marawi is "winding down."

Pernia also touched on the standoff in Marawi City on the island of Mindanao, which has been under martial law since May. "The situation is winding down, but we need hard data to assess the economic interest of martial law."

Re-establishing peace is crucial for the Duterte administration. "The agenda starts from zero, not one," said Pernia, referring to a 10-point socioeconomic development agenda unveiled by the government last year. "Peace and order is zero on the agenda -- the foundation of all the others."

Nearly 400 investors, government officials and reporters had gathered for the latest leg of the Philippine government's investment roadshow, which started in Singapore in mid-August.

The Duterte administration's infrastructure drive is aimed at eliminating the bottleneck that has long held back the Philippine economy.

The Philippines has been a major beneficiary of official development assistance from Japan. Prime Minister Abe offered a 1 trillion yen aid package while on a state visit to Manila in January. But to make the program a genuine success, the country needs a lot more investment from private companies overseas.