TOKYO -- Japan's Ministry of Economy, Trade and Industry is considering a public fund to ensure progress in the decommissioning of the Fukushima Daiichi nuclear power plant, ministry sources said on Saturday. 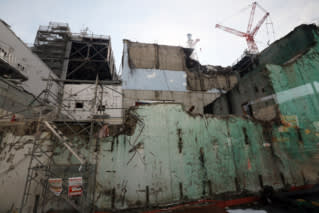 This Feb. 9 photo shows the crippled No. 3 unit of the Fukushima Daiichi nuclear power plant.

METI is specifically considering a new fund at the government-backed Nuclear Damage Compensation and Decommissioning Facilitation Corporation, the sources said.

A massive earthquake and tsunami hit the northeastern part of Japan on March 11, 2011. The twin natural disasters also triggered the meltdowns at the Nos. 1, 2 and 3 units of the nuclear plant.

According to the sources, the new fund would provide necessary financial support to Tokyo Electric Power Co. Holdings, or Tepco, the operator of the crippled nuclear plant, to help it carry out the decommissioning work.

Tepco would have to eventually repay any money to the national government, but over a long period, the sources said. The sources also said that the scheme under consideration would minimize the public burden while ensuring steady progress in the decommissioning work.

It is said that removing melted nuclear fuel and other decommissioning work will take several decades to complete. The work is estimated to cost a few trillion yen (tens of billions of dollars).

As things stand now, Tepco will be able to secure around 2 trillion yen ($19.6 billion) to implement the decommissioning work.

If the exact cost of the decommissioning work is determined and if Tepco takes the accounting step of booking reserves in a lump sum to cover the cost, the utility's liabilities could exceed its assets.

If Tepco were to fall into such a financial crisis, the decommissioning work as well as compensation payments to victims could be stalled. This would delay the reconstruction of Fukushima Prefecture.

METI would make the creation of the fund conditional on the utility drastically reforming its management, the source said.

METI could submit necessary bills, including one to revise the law concerning the Nuclear Damage Compensation and Decommissioning Facilitation Corporation, to the Diet, Japan's parliament, early next year.

Speaking to reporters on Thursday, Tepco Chairman Fumio Sudo made clear that the utility will seek state aid for the decommissioning work and said that the cost of the work will "have a considerable impact" on the company's management.