Race to the bottom for region's sand miners

Asia's beaches and riverbeds suffer as sand demand piles up 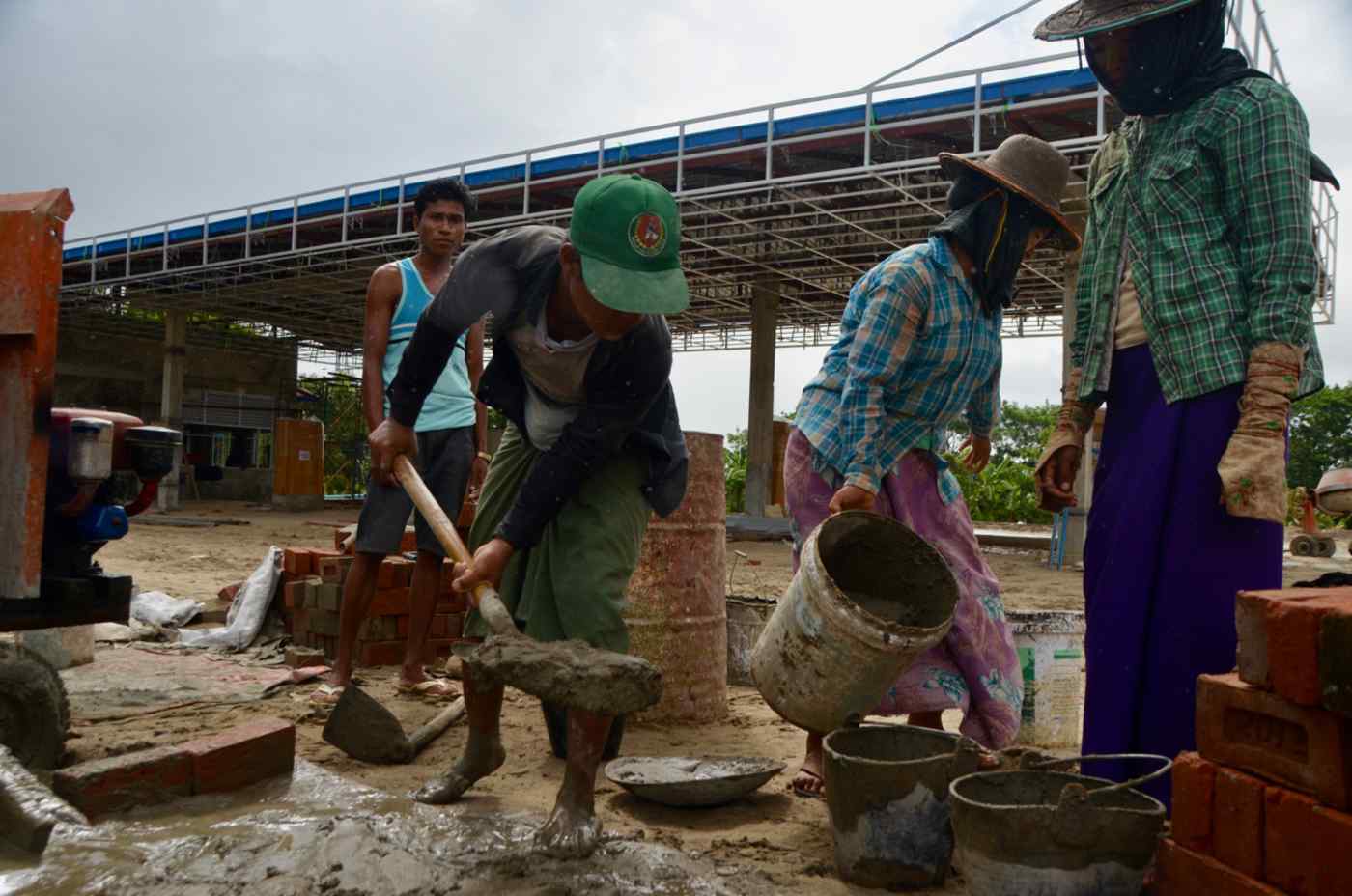 JAKARTA -- As Asia's economies grow and its cities modernize, the region's voracious appetite for construction materials has driven demand for sand -- alongside illegal trade of the commodity -- to unprecedented levels. With rapid urbanization and infrastructure expansion, some countries are mining surrounding seas and their river and lake beds at a pace that could have grave implications for the environment.

Along with gravel, cement and water, sand is needed to make up the trillions of tons of concrete used so far in laying Asia's new roads and constructing tens of thousands of urban buildings.

Around a third of the world's land area is classed as desert, but, rounded and smoothed by the heat and wind, desert sand grains are useless for construction. Sand also makes for a bulky, heavy cargo and the high transportation costs mean that sand is usually dug up or dredged relatively close to where it ends up being used.

"International trade is limited, unless the two countries in question are close neighbors," said Zoe Biller, an industry analyst with the Freedonia Group, a market research company that recently published a report on sand mining. 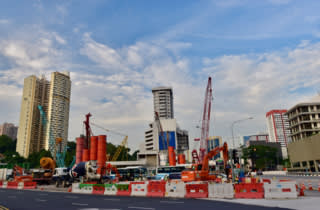 Building site in Singapore, a city-state which has added more than a fifth to its land area using sand imports (Photo: Simon Roughneen)

In turn, this means that Asia's environmentally-fragile riverbeds, seabeds and beaches area are a key source of what, according to the United Nations Environment Program, is by far the world's most mined resource.

"In the last four years, China used as much concrete as the United States in one century," said Pascal Peduzzi, author of Sand, rarer than one thinks, a 2014 UNEP report that contained some sobering sand facts -- such as the estimate that in 2012 the world mixed enough concrete to build a wall 27 meters high and 27 meters wide around the equator.

There is no viable alternative to using sand in concrete, save for recycling demolished or listed buildings, a process that in any case could only make a small dent in overall demand.

"Sand and gravels are the main ingredients of this urbanization and it will be difficult to find one substitute," said Peduzzi. "Yet we cannot extract 30-40 billion metric tons of sand and gravels per year without generating large environmental impacts."

China's Lake Poyang, for example, is that country's biggest freshwater lake but also its biggest source of sand, with estimates of over 230 million cubic meters of sand extracted each year. This is lowering the lake's water level, potentially damaging surrounding wetlands and affecting the flow of nearby rivers, including the Yangtze.

All told, the total amount of sand and gravel mined each year is twice the annual volume of sediment carried by the world's rivers.

In another proxy measure for the amount of construction being undertaken and sand being mined, USGS data show that world cement production tripled from 1.37 billion metric tons in 1994 to 4.2 billion tons by 2016.

Each ton of cement needs to be combined with between six and seven tons of sand and gravel to make concrete , and, according to economist Tim Harford's "Fifty Things That Made the Modern Economy," "the world produces vast quantities of concrete, five tons per person per year."

Between 2000 and 2010, some 200 million people moved from countryside to city across East Asia, mostly in China, according to the World Bank. Still, by 2010, only 36% of the region's total population lived in cities, meaning that more urbanization is likely over the coming decades.

This means that pressure on Asia's sand resources is set to grow, not just because of expanding cities, but also due to Beijing's backing for continent-spanning infrastructure links. China is aiming to reinforce its position as the region's leading economy with what the National Bureau for Economic Research, a leading U.S. research organization, describes as "a vast network of railways, highways, ports, pipelines, and communication infrastructure spanning the Eurasian continent and facilitating trade, investment, and people-to-people exchange."

Elsewhere described as a continent-wide version of America's post-World War II construction of its interstate highway network, China's so-called Belt and Road Initiative could see around $150 billion per annum worth of infrastructure spending across Asia over the next decade.

Other parts of Asia are also likely to spend heavily on infrastructure over the coming decades, with multinational bank HSBC estimating that Indonesia, Malaysia, the Philippines, Singapore, Thailand and Vietnam will need to spend a combined $2 trillion on roads, railways, ports and airports through to 2030.

In India, now the world's 8th biggest economy with a gross domestic product of $2.45 trillion according to International Monetary Fund data published in April, the need for sand has sparked what has been dubbed the "sand wars" between "sand mafias," with the police often looking the other way as rival gangs gun each other down in literal turf wars.

Some estimates suggest that India's black market sand mining employs over 35 million people and is worth over $100 billion a year. That would make India the biggest player in a global illicit sand trade that could be worth up $600 billion a year, according to Freedonia Group.

Sand conflict on the sub-continent could get worse as India looks set to emulate China's construction-fueled need for sand during the coming decades.

Measured in purchasing power parity terms, India is the world's third largest economy with a GDP of $9.4 trillion, according to the IMF. But by 2050, India's economy will be the world's second biggest after China, five times the size it is now, going by projections by international consultancy PwC. More than 250 million people are likely to move from the countryside to cities in India over the next two decades, according McKinsey, another consultancy.

And while behemoths such as China and India can source sand domestically, Asia is also home to the world's biggest sand importer: Singapore. The tiny city-state has added more than 20% to its land area since independence in 1965, "reclaiming" territory from the sea, which in reality means heaping on sand dug up and shipped in from neighboring countries to expand the island state.

Singapore's appetite for sand prompted unscrupulous Indonesian miners to destroy at least a dozen small islands in that scattered archipelago, digging and dredging the sand until there was almost nothing left for the waves to wash over, according to environmental groups. Attempting to curb the destruction, Indonesia -- as well as Malaysia and Vietnam -- have since halted sand exports to their small but rich neighbor, enabling Cambodia to step into the void.

But that trade between Cambodia and Singapore, too, has been blighted by allegations of corruption and environmental damage as well as vast discrepancies in reported sand trade statistics between the two countries. U.N. trade data from 2016 showed that Cambodia reported exports of less than 3 million tons of sand to Singapore from 2008 to 2016, while separate figures from the Cambodian Ministry of Mines and Energy showed exports of 16.2 million tons.

However, Singaporean data showed imports of more than 70 million tons of sand from Cambodia over the same period. In a recent email response to questions, the Singaporean Ministry of National Development said that "the figures reported by various parties and countries are dependent on their own calculation formulas, which we are not privy to." The ministry added that anyone assessing U.N. trade data "should bear in mind that figures are self-reported by countries," which allows for discrepancies between countries.

In Cambodia, sand dredging has damaged coastal environments and fishing businesses. "While it is difficult to assess the exact ecological impact of sand dredging, studies have found a number of ways in which sand dredging impacts on aquatic habitats, which may have detrimental consequences for fisheries," reported the Cambodian Center for Human Rights in September 2016, listing reduced water quality and loss of access to fishing grounds.

Alex Gonzalez-Davidson, executive director of Mother Nature Cambodia, an environmental protection organization, said in March this year that "the Cambodian government agencies relevant to the mining and export of sand have given varied explanations on why there is such a huge discrepancy."

"They started by saying that the UN data was incorrect, and then, when we obtained trade data from both governments which corroborated the UN's data, they started saying that perhaps the Singaporean government might have wrongly recorded some sand imports as having come from Cambodia, when in fact they hadn't," said Gonzales-Davidson, who has been banned from entering Cambodia over his campaigning on environmental issues.

Cambodia's government said on July 12 that it was banning all sand exports to Singapore. But as the U.N.'s Peduzzi told the Nikkei Asian Review, the case shows that as sand demand grows, so does the need for some form of "reporting mechanism at the global level which allows recording the amount of sand and gravels used by countries."